Leon casino, Hell has not frozen over, but pigs are flying… to Austin, to quash efforts to legalize cannabis in Texas.

“The eyes of Texas” are opening to the truth that cannabis is being recognized (again) for it’s remarkable abilities as a medicine for numerous maladies and conditions. Major media in the US has shone a bright spotlight and given a particular focus to the benefit possible for children with neuromuscular diseases. Various Texas organizations have worked to educate and embolden our representatives, including the Marijuana Policy Project, NORML chapters from around Texas, Republicans Against Marijuana Prohibition, Law Enforcement Against Prohibition, US Veterans, patients, a working Texas judge, and thousands of individual Texans.

We have 13 bills currently under consideration by the Texas legislature to change our state’s laws on weed. Ranging from the “Affirmative Defense” bill that would allow you to request status as a medical marijuana patient (after you are busted), to my favorite bill (HB 2365), presented by Rep David Simpson out of Kilgore, who states: “I am proposing that this plant be regulated like tomatoes, jalapeños or coffee.”

If Representative Simpson’s bill is passed, it will immediately take billions of profits away from barbarous cartels in Mexico and US gangs who profit by selling flowers and other plant products to our children. Of course the police, prosecutors and prison wardens are in a tizzy not wanting to lose their favorite cash cow, and are pressuring our elected to stay the course in a war that can never be won.

Within the last two years, the drug formerly known as marijuana has been examined and debated as never before, and given “legal” status for recreational use in four US states and the District of Columbia. Except in DC, this “legal” cannabis is monitored, taxed, inspected, and overseen like no other “legal” product in the history of mankind. This constant oversight ensures that the price to grow and distribute will remain especially high. When you include the cost of inspection, monitoring and massive taxes, the price of cannabis stays 50 to 100 times above “farm-gate” value, thus ensuring that the black market continues to exist. As of now, high quality, outdoor grown cannabis sells for up to $4,000 a pound and more than $8,000 a pound when sold by the gram. If we simply “do away with” Texas’ cannabis laws as recommended in Simpson’s bill, the price would drop well below $100 a pound and destroy the ability of the illegal sellers to compete, thus eliminating the black market vendors who have no qualms about selling drugs to our children.

A year ago, I would not have given a 1% chance for any of these bills to pass, but in the last few months, some major players have stood tall for common sense in this regard. In December, a guest on my Cultural Baggage radio show was Charles A. McClelland Jr., police chief of our own fair city. Our interview became a national story with dozens of outlets carrying the thoughts of the Chief. Each story, all positive, quoted the Chief saying the drug war is “a miserable failure.” More recently, he told me his choice of the cannabis bills put before our legislature was to “support decriminalization and lowering of fines and penalties.”

Last October, Mayor Parker came on my show to say, “We need a complete rethinking of the nation’s drug laws. We have seen over and over again that outright prohibition doesn’t work.” Since taking over from her husband as DA of Harris County, Devon Anderson has refused to be a guest on my show and after she took office, our Sheriff Adrian Garcia has also refused to speak about the drug war over the airwaves. Here’s what the Sheriff had to say back in 2010: “ I can’t deny that we need to do something better”.

In years past, you would hear a seemingly endless echo of “We can’t legalize in Texas as long as there is a Federal law against cannabis.” This situation has not stopped more than 20 states from legalizing cannabis for medical purposes, yet the thought of Federal interference has been a powerful stumbling block in Texas — the one state most likely to assert “States’ Rights” in any other context.

In 2015, President Obama, Attorney General Holder, a handful of retired US attorneys, as well as dozens of US Representatives have moved the bar of discussion to one of possibility. Just last month, at least six US Senators put forward a very comprehensive medical cannabis bill that would ensure scientific study, force the Veterans Administration to permit our veterans the use of cannabis, allow banks to open accounts for cannabis dispensaries, permit interstate shipments, and would give states the ability to determine if cannabis is right for their citizens with no worry of Federal interference.

Knowing the truth about the drug war is one thing, but to say as much, as our courageous police chief and others have done, is quite another. The drug war is a belief system, a quasi religion that often compels people to remain silent despite the obvious horror that this prohibition brings forward each day. Whether at work, at church, in school or most any venue, for decades, we dared not speak of the “miserable failure” of drug prohibition, even though it has never stopped even one determined child from getting their hands on drugs.

What we truly must “prohibit” is the black market. Drug prohibition of the ludicrously named controlled substances generates revenues of more than $300 billion dollars a year. Beneficiaries of this loot are terrorists, bloody Latin cartels and the US gangs who lure our children into lives of crime and addiction. These bad actors do not want legalization of any drugs, for it would kill their golden goose.

Let’s start by legalizing cannabis for adults, regulate it, sell it for pennies on the black market dollar, and then not tax it so much that we ensure the continuance of the cartels and gangs. I project that, soon thereafter, we will decide to judge adults simply by their actions and not by the plant products in their pocket — like it used to be in America.

Dean Becker produces nine radio programs per week for Pacifica and the Drug Truth Network. Cultural Baggage is broadcast in Houston on KPFT, 90.1 FM on Fridays at 4:30 PM. He is a former policeman and is now a “speaker” for Law Enforcement Against Prohibition. Becker is a contributing expert for the James A. Baker III Institute and author of To End The War On Drugs (available on Amazon). 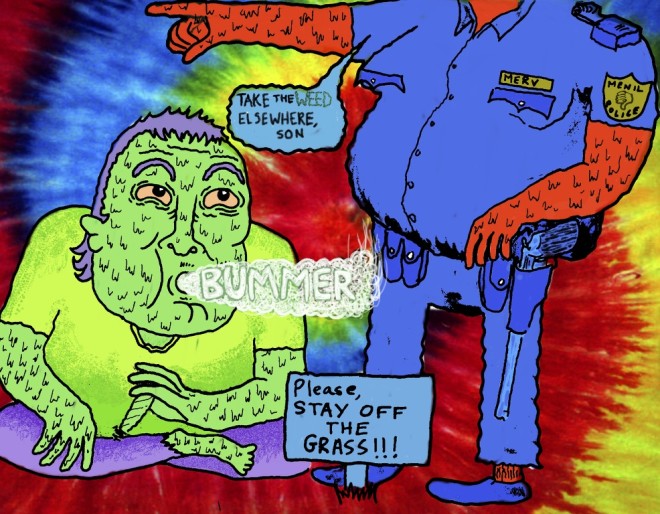