Self/less: are two heads better than one?

Decrease Font SizeIncrease Font SizeText SizePrint This PageSend by Email
In Self/less, a sci-fi thriller starring Ben Kingsley and Ryan Reynolds, Kingsley plays a billionaire on the verge of death that undergoes a radical procedure that transforms him into a younger man.

Leon casino, How close to reality is such an operation?

“The way this is portrayed in the movie, they have the body and the donor body in twin MRI machines and it involves the transfer of the brain from one body to another. That is more on the science fiction side,” says Dr. Wolfgang Fink in a phone interview with Free Press Houston.

Dr. Fink has advanced degrees in Physics, Physical Chemistry and Theoretical Physics. Some of his areas of research include artificial vision, robotic space exploration and biomedical sensor/system development. Fink is the inaugural Edward & Maria Keonjian Endowed Chair of Microelectronics at the University of Arizona, and also a Visiting Associate in Physics at the California Institute of Technology. 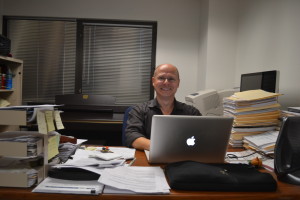 “What we have now is the fact that people live much longer than, for example, one of two hundred years ago. Preventing early cell death is something that is under heavy research, and there are medications out there for precisely that purpose,” says Fink. “The movie is science fiction. What is does is point in the direction of research which is currently under way.

“For example you have the 2045 Initiative, which has as its goal the ability to transfer your personality and brain to a machine and ultimately into an avatar. Of course another aspect is freezing your body shortly after your death with the potential to be resurrected after the fact when medical science has advanced, especially on the nanotechnology side, to repair cells,” says Fink.

“Generations down the road I could foresee the ability to transfer or conserve your personal mind to an artificial system. That is something to an extent that I am working on. But we are quite far from that. What is something, though, that is going to happen is the transfer or transplant of one head to the body of another person.”

Fink refers to a Russian man named Valery Spididonov, who suffers from a terminal muscle wasting disease, who will be the first human to have his head removed and placed on a brain dead donor body in 2016. Italian doctor Sergio Canavero of the Turin Advanced Neuromodulation Group will perform the operation.

“That’s something that will at least be undertaken in the near term future. And that is the closest we are getting to what the movie Self/less portrays,” says Fink. “In principal this has been done before,” Fink adds about experiments performed on dogs, monkeys and most recently mice.

Self/less bears an uncanny resemblance to a 1966 film titled Seconds. In the latter film a company gives you a new identity after faking your death. There was a melancholy mood that permeated Seconds as the protagonist finds his new life as empty as the previous.

Self/less jettisons the philosophical aspects of the double theme for a straight-ahead thriller where Ryan Reynolds goes commando against the secret company. Matthew Goode, Natalie Martinez, Victor Garber and Michelle Dockery co-star. The film marks a low point in the otherwise interesting career of director Tarsem Singh, known for his unique locales and lush visual style. Yet the spine of the film with its theme of medical ethics provides an interesting launch pad for the state of current science.

For instance, freezing the body or head at death for future reanimation. “As far as the freezing is concerned you have companies like Alcor, located in Arizona. They freeze either the full body or the head. Right now they are focusing on freezing the body right after you are legally dead. They artificially keep the blood system flowing while they are engaged in the freezing process,” says Fink.

“The real question of course is whether science makes advances over the next years of research to where you can safely reactivate these bodies or heads without causing any damage. You also have molecular nanotechnologies that come into play, where you repair internal cell damage.”

So could you have a head transferred to a machine piloting a craft in outer space?

“You might be able to get the blood supply and circulation going with the head. That might be technically possible. The issue at that point has more to do with a fundamental ethical issue. Do you consider that person without a torso a person or is it something else? He or she?” asks Fink.

“There are other issues – for example radiation. One of the advantages of robotic space travel is that you can shield them whereas if you have a biological component, such as a head on a spacecraft, or as part of the spacecraft then you have to worry about radiation,” says Fink. “One of the issues of traveling to Mars is, health wise, the effects of radiation. Having said that it would be advantageous if you had a human component, no pun intended, because that would be far superior to artificial intelligence systems.”

Fink maintains that what is fiction now becomes reality in the future. “About five or six years ago there was an exhibit that showed off Star Wars memorabilia, a section of that dedicated towards Luke’s prosthetic. That was pure science fiction in 1980,” says Fink.

“Three decades later we are delivering on things that were anticipated. So even if some of the movies we see now are playful in a science fiction sense they inspire directions that will ultimately become true. Maybe not in exactly the way it’s portrayed, but in a related way. Today prosthetic arms and hands are used on a routine basis, and they’re constantly being refined. That’s something that at the time was pure science fiction but now is reality.”