Something Rotten in the State of the (Fresh)Arts 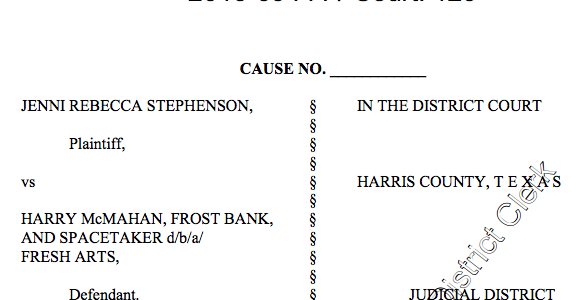 Leon casino, The court documents finally shed some light on Stephenson’s abrupt, controversial departure from the organization which was so closely linked with its former head in the local arts community’s eyes. Back in October, the Fresh Arts board falsely claimed that Stephenson resigned, but that’s just the beginning of the morass.

The speculation then was that Stephenson was forced to resign because she had publicly challenged the director of the Museum of Fine Arts, Houston, Gary Tinterow, regarding the disbursement of City funding for the arts — Tinterow and his well-funded cohorts at the Museum District and the Theater District were allegedly making a ploy for an even greater share of the City’s limited arts funding at the expense of smaller institutions serving local artists, for whom Stephenson was advocating. According to publicly available court documents from the suit filed yesterday, however, the real story is much more salacious.

Stephenson alleges, in her complaint for defamation, breech of contract, and infliction of emotional distress, that Fresh Arts’s board president Harry McMahan joined the board “[i]n order to network and market banking services…to Fresh Arts related contacts.” When Stephenson complained to McMahan that Frost Bank’s services were not competitive compared to the organization’s previous bank, Amegy Bank, Stephenson further alleges, McMahan “devised a scheme to remove Jenni from her position as executive director of Fresh Arts.” This scheme, according to the civil complaint, involved accusing Stephenson of stealing from Fresh Arts.

While it certainly could be mere coincidence that Stephenson was fired from her position just days after making public statements challenging powerful local interests, the fact that her interim replacement, Julie Farr, also serves as interim director of a competing organization (The Houston Museum District Association) that is chaired by the person Stephenson criticized, Gary Tinterow, is a glaring conflict of interest.

Sunlight is the best disinfectant, and there’s definitely something rotten going on behind the scenes of the Mayor’s Cultural Plan. Let’s hope that, if nothing else, this lawsuit sheds some light on possible bullying of smaller organizations by larger institutions whose alleged unchecked greed is stifling the local arts. In the mean time, it must really suck for sponsors of the upcoming Fresh Arts gala to know that their contributions are going to be spent on legal defense before they go towards supporting local arts, as I’m sure the donors intended.

In Their Own Words: Homeless in Houston