Decrease Font SizeIncrease Font SizeText SizePrint This PageSend by Email
The ‘hey girl’ meme is out and the ‘grumpy cat’ trope is in. That’s my story and I’m sticking to it. Also parking prices at SXSW 2015 have skyrocketed.

Leon casino, Not to be deterred here is some parking advice, if you have to attend this year’s SXSW with your vehicle. When you see parking garages charging $40 to $50 for daily parking consider this: if you drive west of Congress Avenue in the downtown area you will find parking meters that allow between three and five hours parking for a dollar an hour. But consider walking or taking a bike because even with Uber or having a friend drop you off you still run into massive automotive gridlock exacerbated by construction.

Once inside the Austin Convention Center the attendee is in another world. First up was a classic Q&A style seminar where Guillermo del Toro interviewed Ryan Gosling. “We’re here to talk about the movie not the hey girl meme,” del Toro said to laughter. Gosling’s directorial debut Lost River had its US premiere on Saturday night (the film premiered last year at the Cannes Film Festival).

Shaking his left hand and jangling his wristwatch Gosling talked about his youth in Canada. “When you’re a Canadian kid America is like a pin-up girl you hang in your locker.” He was enamored with the city of Detroit and while he didn’t visit there until he was 30, it’s the setting for Lost River. 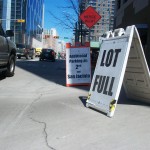 Gosling shot the movie on film using T1 lenses. “At first I did a scout with my cell phone camera, then I shot footage with a 5K camera and then I bought a Red camera,” said Gosling. Some of the pre-production footage found its way into the movie, which he added was like a Dark Goonies. Gosling cast people he’d worked with before but also used innovative sources like casting websites (castittalent.com) for specific roles.

The conversation took on a back and forth volley about Hollywood with del Toro mentioning that Mexican directors have won Oscars the last two years. He recalled how when his cinematographer Guillermo Navarro won the Oscar for his photography on Pan’s Labyrinth (2006) he still encountered prejudice when he was told that he should be a gardener instead.

“You are still acting when you are a director,” Gosling said. “The sun goes down and you still have five shots left. You act like it’s not a problem.”

When the inevitable ‘hey girl’ question came up from the audience Gosling replied: “You have to own your film line, like ‘I’ll be back,’ but I never said hey girl ever.” 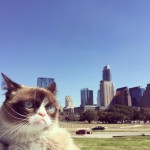 All through the weekend an airplane flew with a banner of Grumpy Cat over the downtown Austin area. There was also a blimp advertising Direct TV on Sunday. Grumpy Cat even made an hour-long appearance at SXSW. Is it possible that Grumpy Cat isn’t really that unhappy and smiles and plays with yarn (and sleeps) the other 23 hours of the day?

Stay tuned for more updates and interviews from SXSW Film 2015 later in the week.