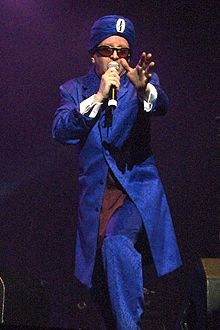 Gerald in his Jihad Jerry persona

Devo album Smooth Noodle Maps was released in 1990 and for twenty odd years, that was their last; which is an incredible gap. No, no one died. No one was arrested. And No, there wasn’t a lengthy breakup, in fact they only took a five year hiatus before reuniting in 1996. For some reason there was just a glut of new material despite the band’s amicable status.

For ten years after, Devo toured extensively and performed old material for new generations but did not write any new material until 2007 when they started recording 2010 release Something for Everybody. I was fortunate enough to chat with Gerald Casale, founding member, bassist and co-songwriter for Devo. Our talk ran the gamut, from music to misanthropy.

FPH: I know that you guys had a gig at Fun Fun Fun Fest last year and I was excited about it. I heard you had to cancel. Can you tell me a little bit about that?
JC: Yeah, it was a terrible bummer all around. Mark Mothersbaugh cut his hand with a big shard of glass going straight between the thumb and first finger, all the way down to the nerve, through the tendon. And it took two and half months before he could play again. We had to cancel eight high-profile shows on the east coast, mostly radio shows. Mark and I still went and went up on stage with the octopus project and did a couple songs. We received that Moog award. It was this new, deluxe, mini-moog, with vast improvements and [they said] it was ours and then, it turns out, we never got it.

FPH: I know it hasn’t been actively lately but can you tell me about the Jihad Jerry side project? Is that going anywhere or is that done for now?
JC: Well, Jihad Jerry did not get the love, let me tell you. I thought a man in his senior years, dressed in a theatrical turban and a pimp suit would be clearly satire. And guess what? We live in a nation full of scary people and I received a lot of threats from Muslim people, because I was an infidel but I also got really dissed by all the Christians. They didn’t get it. They thought I was pro-jihad [laughter] and even though it says, mine is not a holy war-
FPH: Right, there’s plenty of messages woven throughout that show that’s obviously not the case.
JC: So much for me declaring a holy way on stupidity. Stupidity will win every time. I thought with songs like “Army Girls Gone Wild” that it would be very clear what the point of view was. That it was kind of R & B mixed with political satire. The video made the clear and the video got half a million hits and you know everybody liked it. But somehow it didn’t translate. Maybe I’ll come back as Jer Jer Devo, in the same outfit, like Jar Jar Binks. [laughter]

FPH: I know since your last studio album, you guys have all recorded plenty of different things whether it’s solo stuff, or collaborating with other people but what was it like coming back into the studio twenty years later doing a whole new record? Was it a shock at all?
JC: Well, not to me. It’s something I was always ready to do, I never wanted twenty years of de-branding and a war of attrition. Mark Mothersbaugh was not interested in collaborating and Devo is a collaboration. The five musketeers, he and I were the driving force, co-songwriters. You look at the credit and it comes out about 50/50. I did the stage shows and he did the graphics. It was a whole self-contained machine. Once you pull one of the principle parts out of the equation, you don’t have it anymore. For me it was just like getting on the bike again and I guess I can only speak for myself. I never lost spirit. I thought we had plenty left to say. I thought the times were so devolved that I couldn’t see any reason for Devo not come back. It seemed perfect. Fun for me.

FPH: This is kind of a rhetorical question, but just to get your take on what’s going in the world, do you still feel that devolution is real?
JC: Well it’s more real than ever. It used to be a punky, smart-ass theory and kind of funny but then you know, in the thirty odd years since we hatched it, it’s all too true. Ours was a satyrical warning but culture has proven to warm right up to it. I can’t even fight an argument with anyone now. It’s kind of like global warming, everyone with an IQ of 100 knows that it’s real and it’s not an argument anymore, it’s just a fact. You just accept it as a basis for moving forward with life. That’s what I feel about devolution. If someone showed you in a crystal ball the world in 2011, you wouldn’t have believed it! You would have thought it was a cheap, b, sci-fi movie, a dystopia.
FPH: Right, with everything but the flying cars.
JC: Exactly. None of the good ends of the future happen.

FPH: You brought up global warming and a couple days ago I watched an interview you did about the BP spill and I really enjoyed that. What do you have to say about our stewardship in the environment in the United Sates? I know when President Obama took office, I was at least anticipating something a little more efficacious but it never happened and it think it just goes to prove that devolution theory even more.
JC: Well, no one’s allowed to be the song and dance man for what we now know is the brand of America. If they were really affected they would be either A. assassinated or B. effectively ruined by the media so that they would lose. But the only people who can be our leaders are already owned by the people who pull the strings. It’s like that scene in Network where they take Ned Beatty down and- I mean Peter Finch down and Ned Beatty is sitting at the desk and lets him know how it really works [laughter]. And I’m sure that that talk takes place with Obama or anyone else, you know you can go out there and say what you want and give ’em false hope but here’s what’s really going to happen once you’re in.
FPH: It seems like nowadays, there’s no one who’s really immune to the effects.
JC: No there’s good guys-
FPH: Right of course! But there a lot of people who are intertwined.
JC: Right, I mean there might be some good guys but they have no power. I mean we talk a big game about being superior and being more caring about the planet but it’s bullshit. It’s completely bullshit. And we’re the biggest waste-mongers in the world as far as carbon footprint per person, while we’re preaching holier than thou, we’re taking shits in everyone’s back yard. It’s all ludicrous. It’s human nature combined with too many people on the planet. This species is running wild, unchecked by all the rest of nature. Nature’s doing its best to fight back. You can only make the earth so sick before it pukes you up. People go [in a deep voice] ‘we have to save the environment!’ but really you have to save yourselves because without humans, this place is beautiful. It would be like paintings from a thousand years ago or the first pictures you ever saw of unfettered wilderness that wasn’t polluted. It would be a great planet.

FPH: Kind of a shift here but one of the things I noticed was a slight change in aesthetic when the video for ‘Fresh’ came out. What happened to the energy domes? Are they still around?
JC: Yes, the Energy Domes are alive and well. In fact, now they’re in two colors, red and blue. Like red and blue states. But now we’ve added the Everybody Mask to the locker of Devo equipment, including the pompadour hairdo inspired by 1950s politicians and spudring collars. But the real aesthetic change was working with producers and letting them add some magic, fairy-dust to our music rather than keep it all in-house. Was there any song in particular that stood out to you?
FPH: [deciding to limit it to just two] My favorite song on the record is “Human Rocket” and “Signal Ready” was also completely awesome.

FPH: Can you tell me about the focus group? I only found out about after some time had passed and it was over. How did that shape the album?
JC: Well, you know, it wasn’t well enough publicized. It wasn’t brought to market right. We wanted a million people to be a part of that focus group, instead of just 40,000. And what it did is it gave us another- I don’t know what you’d call it, another product in the order of the votes that the songs got. People got exactly what they voted for. Then there was the deluxe version that had everything and then a corporate version where there was some compromises because Warners was our financial partner and they had a say. And that differed here and there from the focus group and after all, it was something for everybody and in reality everybody got what they wanted.

FPH: What do you think of Houston?
JC: Well every city has great things about it but I just need someone to show me around. You have to have an in. The last time I was here in Houston, we played two shows and I got pulled off stage, arrested, and was forced to stay in jail all night. The club was shut down because it was overloaded and the people did not believe there were cops there. They kept saying, ‘boo! Fuck you! We want more music!’ and honest to god people, there were little piggies back stage. One of the little piggies the decided to grab me and take me off stage. We were exonerated and the arrest was expunged but I don’t hold it against Houston.

The synth-pop pioneers will be gracing the Warehouse Live stage tonight with Austin’s Octopus Project.