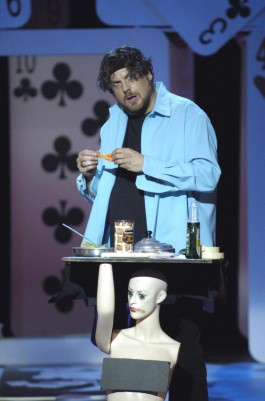 There is a lot to say about a man who attempts to saw his own arm off  and eats razor blades for a living. Some would even say he even belongs in a psychiatric ward, and if so. He’s already there, in Las  Vegas where he performs every night at The Harmon Theater.

Leon casino, The Amazing Johnathan has been performing since the 80’s wearing his  infamous headband. “In the 80’s there was a lot of drugs and I did  them and it’s where I stored them.” says The Amazing Johnathan. While  he is performing his loud off beat-side street performance he really connects well with the audience through what I’d like to refer to his  crazy eye. “Well I stored drugs in my headband. I sweat. That shit  sweats into my eye. So that’s how I got that!” he jokes. Johnathan’s  sick twisted humor has led him the name The Freddy Krueger of magic.  If you know Freddy well, like a cat he plays with his food before he kills it. As for The Amazing Johnathan he has a tendency of toying  with your emotions before making you hurl or force you to watch the  remainder of his performance through your fingers.

His Comedy Central special has led him to the public eye of the world without actually leaving Las Vegas,but this time he’s leaving Vegas to  perform on the road. “I’m excited to get on the road and start  performing out of Las Vegas. That place is like a black hole. You get  so lost in there and are so out of tune with the rest of the world”.  So with one Comedy Central special under his belt and now working on new material for another special with Comedy Central he is hitting the  road to Austin, TX for Moontower Comedy Festival where he will be making Austin weirder than it already is. You can catch his standup comedy magic show through out the week from the 25th - 28th of April at Stateside at The Paramount and Cap City comedy club (check site for times). 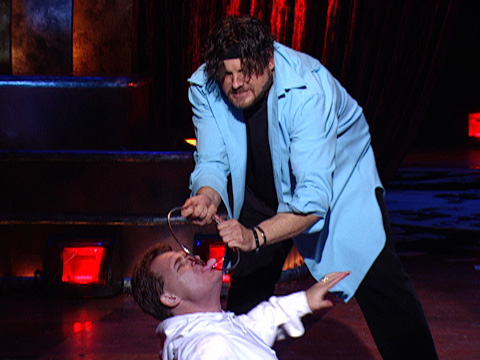 This all sounds great for him, but just this past February he landed himself in a terrible car crash that not even he could escape from. While his girlfriend Anastasia hit the windshield and dashboard and walked away with “bumps and bruises” The this-time-not-so-Amazing Johnathan  broke the steering wheel with his chest and broke some of his own ribs as well. “It’s getting better. I had to get my ribs placed and practice my breathing while performing in a chair, but I’ll be ready for Austin though.” He’s actually added the crash bit into his act. We shall see how he turns his near death experience into a laughter, because as of now I guess he is afraid to drive any of his old classic vehicles which do not have airbags nor manufactured seat belts. Can you blame him?

Aziz Ansari, Roasting King, Jeff Ross, Seth Meyers, Wanda Sykes, Chelsea Peretti, and more will all be in Austin this week so I will see you there.