The Failed Promise of The Texas Miracle 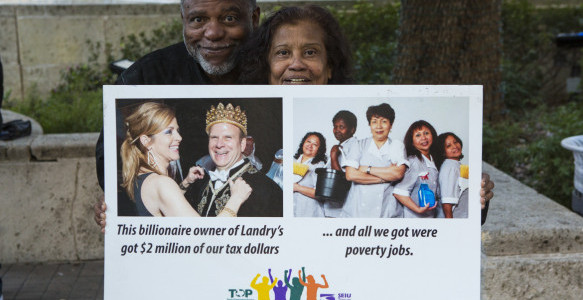 Decrease Font Size Increase Font Size Text Size Print This Page Send by Email
“When our elected representatives spend money on corporate subsidies, that money should benefit working families,” said Tarsha Jackson of the Texas Organizing Project at a press conference on the steps of Houston City Hall on Thursday, February 4. TOP, along with the Workers Defense Project, was promoting the release of a study called The Failed Promise of the Texas Miracle: Corporate Subsidies in the Lone Star State, which examines and undermines claims made by the Rick Perry administration about the state of jobs in Texas during the “economic recovery.”

Leon casino, Throughout the “economic recovery” following the Great Recession of 2008, Governor Rick Perry and his acolytes throughout the state touted what they called “The Texas Miracle.” 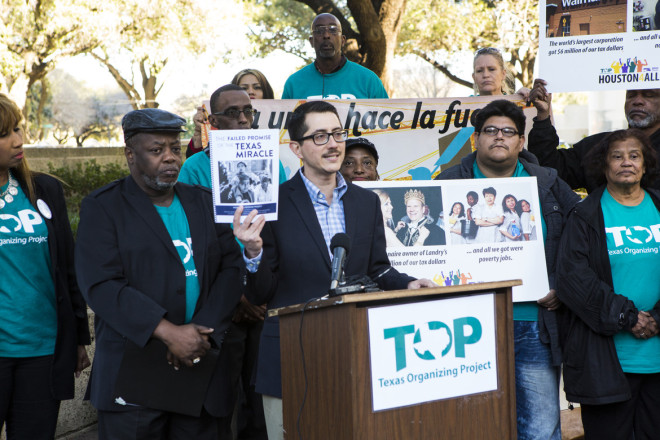 At first glance, that sounds incredible, but we all know the truth is that those jobs were either low-paying service industry jobs or they were in the oil and gas industry — bolstered by then record-high oil prices — which have since tanked.

José Garza said that $1.7 billion was spent on corporate subsidies in Texas, of which $200 million was spent by the City of Houston. Jennifer Hernandez stated that 90% of these incentives go to large corporations such as Walmart and Halliburton, not to mom and pop small businesses which are more likely to spend that money locally but are instead losing out to unfair competition by the multinationals.

“That money could be spent on transportation and education — worker training,” said Garza. “When subsidies are granted, there should be requirements to create good jobs.”

Demands voiced by these critics include a $15 minimum wage on projects receiving government subsidies, greater transparency and accountability in the granting process, policies to prevent corruption and conflicts of interest, and investment in education and worker training — all things which would benefit not just working families but all taxpayers who are funding these corporate handouts.

It’s an interesting take on the “Fight for $15” campaign, which is seeking to raise the minimum wage to $15/hr. Though we live in a conservative state which favors “local control” of politics over centralized power, the Texas legislature has actually made it illegal for municipalities to set their own minimum wage (unlike cities like Los Angeles and New York, which have set the minimum wage within their city limits at levels higher than those mandated by the US Congress).

Similarly, TOP and WDF are demanding that the City of Houston raise the minimum wage at least on projects where they are granting subsidies at the public expense.

Look for continued coverage on the Fight for $15 on Free Press Houston in the coming weeks and months.

All Along: The Best of The Week

POPULARITY IS IMPORTANT: AN INTERVIEW WITH CAZWELL