The Fight for Abortion Rights: Activists Push the Vote Past Midnight 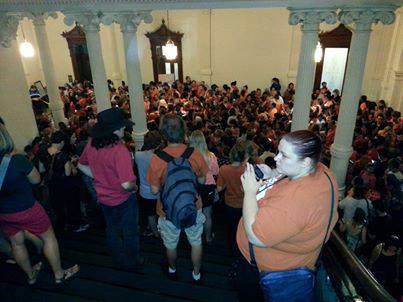 Leon casino, at 4am after a long night, Cindy Noland said:

I initiated having women’s groups work together for this legislative session August of last year. I called up Planned Parenthood, NARAL and a couple of others. We had lunch, and decided to do this together, but the regular session ended without any bad bills coming up.

Then Special Session - we lived a lifetime in two weeks.  There was tension between national groups, that had donors and boards, and other people who wanted to take radical action.  What ended up happening is that radial people took radical action on their own. It ended up helping all three nights. The hearing on Thursday, the House vote on Sunday, and then tonight, that bill wouldn’t have been stopped without the protests that GetEqual and Occupy did.  They worked like a well oiled machine.

On Thursday night, it wasn’t until the Chair said that Trisha Lynch was being repetitive and maybe it was time to cut her off, and DPS led her out of the room that people started to speak out. The most beautiful moment was after the Chair left the room they started giving each other the testimony they were waiting to give to the committee, they started being each others’ witnesses. It was sublime.

Saturday they kept threatening us with expulsion.  There was a lot of discussion and arguments about whether to behave and cooperate. Kit O’Connell (from Occupy Austin) made the point that the Republicans aren’t interested in cooperating with you.  When the vote came out for the bill, Occupy was the first to start protesting, and me and a bunch of people joined in.  A DPS officer had to make an example of someone and took me out.  That was the thing that electrified people, was when they saw our protest on media.

If the filibuster didn’t work, the activists planned to protest to make it go past midnight. Planned Parenthood didn’t think it was going to work.  Luckily the people didn’t believe that, because it did work.

As midnight approached, everyone was chanting and wouldn’t stop.  We chanted for an hour (11:45 - 12:45).  We made it clear we weren’t going to go anywhere and we weren’t going to shut up.  There were probably 2,000 people there, the line to get in the gallery went down three flights of stairs.  When we heard the chanting in the gallery, we pack4d in toward the chamber doors.  We started chanting too.  We were all one person.  There wasn’t one person who said ‘ooh we shoudln’t chant.’ There were young and old people chanting, everyone was chanting.

We accomplished this working together, and what I want these national groups to realize is that we can be a powerhouse that can’t be denied.  We need them — their organization, volunteers, and especially their lobbyists, because otherwise we wouldn’t know what action to take when.  They need radical action from us, they need to learn from us.  They just get so big it just makes them conservative.  They don’t want to upset any voters, legislators.  But sometimes you gotta speak out when they won’t be fair with you.  That’s what the Republicans were doing, riding roughshod over the rules.

The Gaslamp Responds to Allegations of Racist Door Policy

TRUMP’S APPEAL TO SELF-HATING IMMIGRANTS: GO AHEAD AND LAUGH AT THE DUMPSTER-FIRE, JUST DON’T DISMISS IT TOO QUICKLY