Leon casino, “She did a number on us.”
-Alice Alsup on Tropical Storm Allison

About one week ago, the local poet, journalist, and University of Houston student Alice Alsup wrote a Facebook post soliciting favorite lines from suicide notes. As a fellow poet, journalist, and lover of words, I thought nothing of it-maybe she was working on a story for Houstonia, where she interned, or maybe she just had some kind of goth predilection.  I contributed some lines from one of my favorites, Mayakovsky’s Vladimir Mayakovsky: A Tragedy. I think Alice, herself, recommended something from Sylvia Plath, but I could be mistaken. Alice’s Facebook profile no longer exists.  As of Monday, June 9, neither does Alice.

She was a sprightly being, a read-headed butterfly fluttering about on her bicycle from a vintage shop to a picnic in the park, from a friend’s club gig to the next poetry reading…to places beyond and places between.  Her lucent, gossamer complexion betrayed a radiance within-she did not seem of this world, in truth. A faerie. A nymph. A sprite.  Her voice-a little squeaky, a little unsure-and her charm-she seemed at ease with being ill at ease, disarmed any unease as another stranger became Alice’s new friend.

At Summer Fest this year, Alice said hello to me then immediately struck up a conversation with my companion, placed a Texas sticker on her chest so as to leave a negative tan “tattoo” in the shape of the Lone Star State, thus giving her a fun distraction from the heat. Our mutual friend Make was about to perform.  She supported her friends, and her friends, likewise, remain some of her biggest fans.  (Look for Alsup’s article about Make, aka Josiah Gabriel, in the July edition of FPH-we wish she were here to see it.  And look for Alsup’s poetry in the upcoming Word Around Town poetry festival.)

Yesterday, a motley crew of about 50 tattooed, pierced, dreadlocked people gathered in Menil Park to mourn and celebrate Alice. The diversity, in every sense of the word, among her friends bore witness to the breadth of her explorations-young, old, black, white, hispanic, man, woman, trans, rich, poor, crusty, preppy-all came out to wring their hands, lament their loss, curse her act, share tears and laughter.

I did not know Alice well, though I had hoped to get to know her better.  I first met her at a dance party I helped organize on Valentine’s Day.  My collective, Nomadic Beats, threw a renegade street party on the median in Montrose in conjunction with Art League Houston. We dropped some funky beats and handed out 200 red carnations to motorists stuck in traffic.  Alice appeared to have loved it, and her presence added much to the atmosphere. 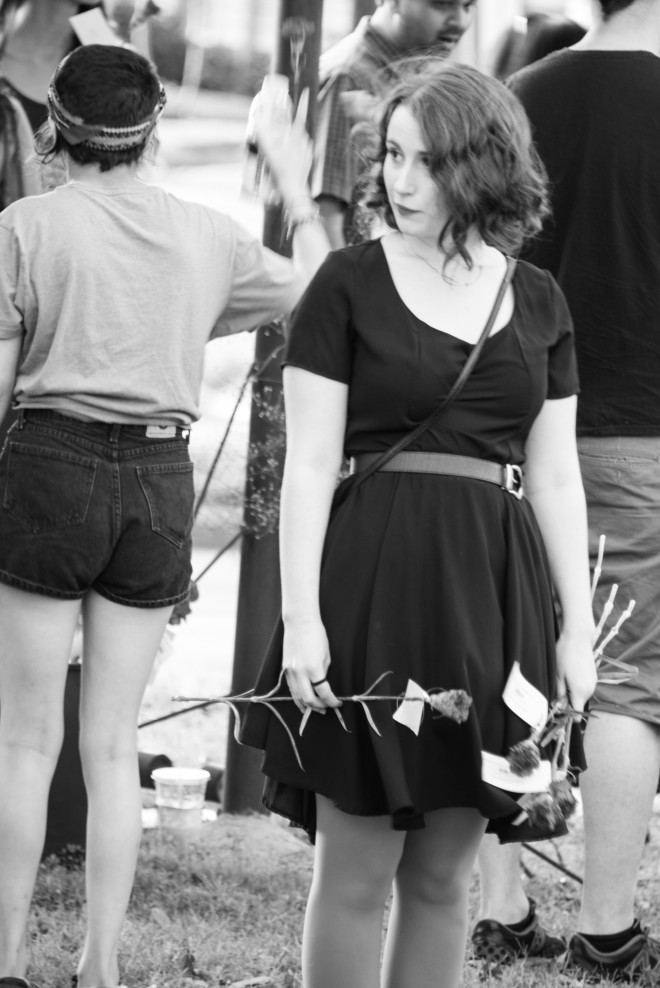 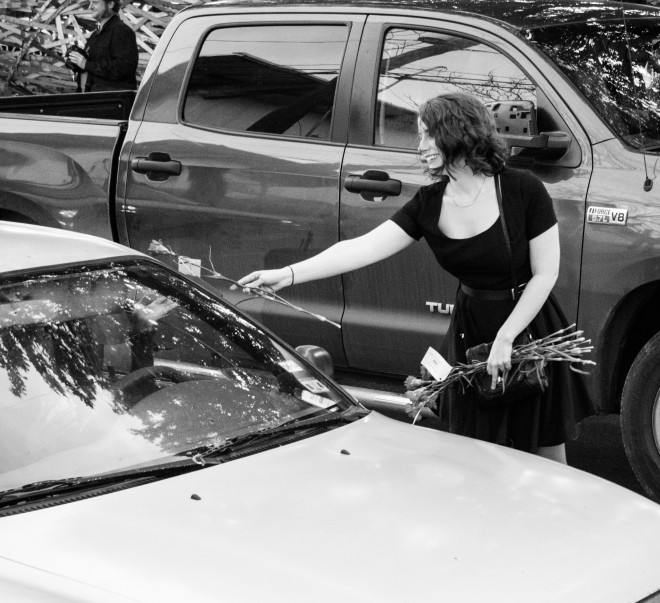 Back at Menil Park, Kira, whose shoulder bears a tattoo line drawing of Vonnegut’s face with the caption “So it goes,” Mary, and I read this passage from Vonnegut’s Cat’s Cradle, the Bokononist death rite, and talked about savoring every moment of our time in this form:

God made mud.
God got lonesome.
So God said to some of the mud, “Sit up!”
“See all I’ve made,” said God, “the hills, the sea, the sky, the stars.”
And I was some of the mud that got to sit up and look around.
Lucky me, lucky mud.
I, mud, sat up and saw what a nice job God had done.
Nice going, God.
Nobody but you could have done it, God! I certainly couldn’t have.
I feel very unimportant compared to You.
The only way I can feel the least bit important is to think of all the mud that didn’t even get to sit up and look around.
I got so much, and most mud got so little.
Thank you for the honor!
Now mud lies down again and goes to sleep.
What memories for mud to have!
What interesting other kinds of sitting-up mud I met!
I loved everything I saw!
Good night.
I will go to heaven now.
I can hardly wait…
To find out for certain what my wampeter was…
And who was in my karass…
And all the good things our karass did for you.
Amen.

Some folks at the park felt angry about Alsup’s “selfish” act; others wiped tears from their eyes and shrugged their shoulders and said she had every right, that the life was hers to live or refuse; some spoke of mental illness; some said our lives are not ours alone, that we belong to others in addition to ourselves.  I was reminded of my high school guidance counselor’s adage that suicide is a permanent solution to a temporary problem.

I hear tell of at least three suicides in the Houston arts scene just this week, all under very different circumstances. I’m not really sure what else to say about that. Love your friends, I guess, and look for those signs.

According to one friend at the memorial, Alice had been posting photographs on Facebook that dropped subtle hints about the way she would eventually choose to go.  According to another friend, on a recent visit to the prison museum in Hunstsville (which she wrote about for Houstonia) she seemed particularly captivated by condemned prisoners’ last words.  And then there was the Facebook exchange I mentioned.  Taken together, these observations begin to paint a picture, but taken independently, how could any one of us have known?

So what is there to say?  It’s just sad, really really sad.  A tragic loss.  Our deepest condolences to the family and friends of Alice Alsup.  If only she knew the number of people she inspired.

Let’s let Alice have the last word.  Ronald Jones’s videos do an excellent job of capturing her spirit. I can’t believe she’s gone.

Read love it’s last rites.
Say to yourself
“This is my heart letting go.”

I should always be prepared to be in transience, you know, ready to move on at any time. Even now, I love where I ‘m living now, but I have every cardboard box that I’ll ever need stuffed in the hallway closet just in case I need to move again. And I have left two boxes unpacked. 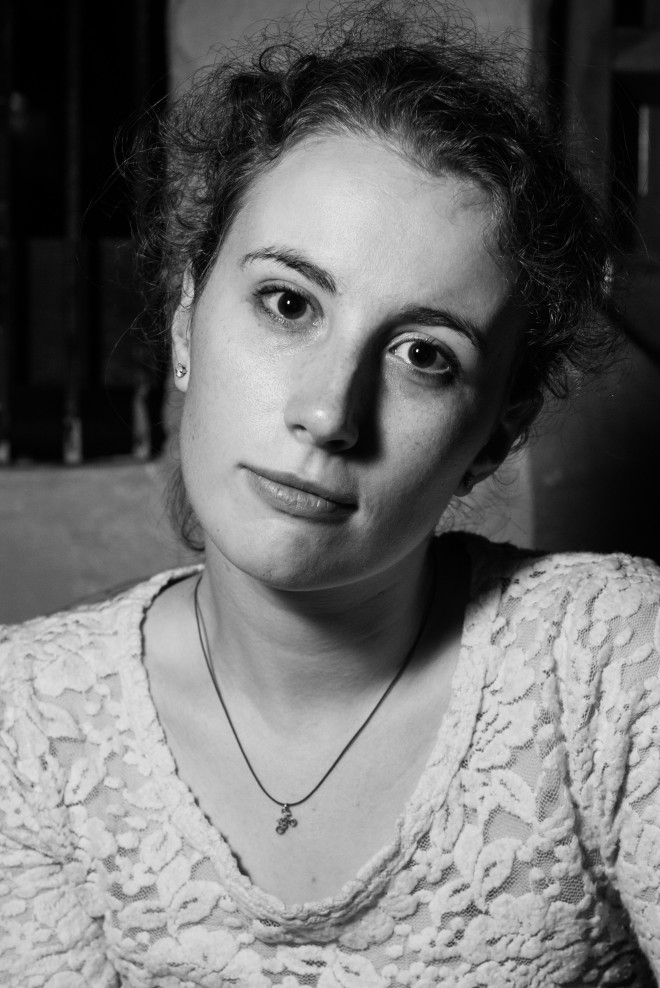 All photos courtesy of an anonymous friend of Alice’s.

Feel free to use the comment space to leave stories of Alice and thoughts for her loved ones.