Leon casino, Even before the humid holiday weekend winds cease a couple of limited releases unspooling in air-conditioned splendor may pique your interest.

Begin Again tells the story of a young songwriter (Keira Knightley) and her Svengali-like relationship with a one-time successful record producer in a career slump (Mark Ruffalo). Complicating matters are the femme’s ex (Maroon 5’s Adam Levine), who has recently become a rock sensation. Begin Again, playing at the River Oaks Three, moves to a different and better rhythm when Knightley and Ruffalo share screen time as opposed to scenes with Levine. To his credit Levin does pull the part of a self-obsessed rock star quite well but he’s no match for the A-game level acting that Ruffalo and Knightley provide. Hailee Steinfeld and Catherine Keener co-star in a sub plot involving Ruffalo’s estranged family.

Director John Carney’s previous film, Once, had you leaving the theater elated, humming the tunes you’d heard like you were in the shower. That’s not the purpose of Begin Again. For one thing the songs that Levine performs are supposed to be pop pap reflecting how vacuous a personality his character has become with fame, they’re hardly hummers. The characters in Being Again are compelled to examine their own shortcomings and forced to reinvent themselves. It’s only a happy ending if you’re willing to cut the bonds that hold you in the throes of bad memories. 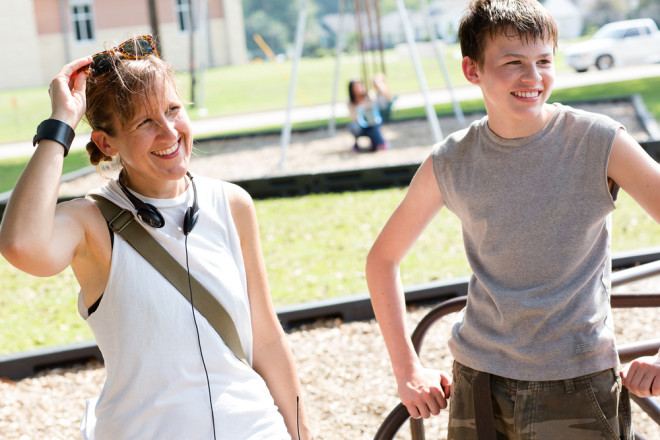 Hellion tells the story of juvenile delinquents from the point of view of said juvy. Thirteen-year-old Jacob (Josh Wiggins) must cope with an alcoholic father and a distant mother even while trying to teach his pre-teen brother Wes (Deke Garner) the ropes. That would be the ropes to fucking shit up: starting bonfires in junkyards, smashing up cars in parking lots.

Hellion is directed by Kat Candler, a mover and shaker in the Austin film scene, and utilizes location shooting in Galveston and Baytown, emphasizing industrial wastelands and working class settings.

Hellion is glum by half. You never feel any real sense of hope for the characters but by the same token you never really feel anything for the characters. Hellion is the kind of indie movie that revels in its hand-held camera stance. The unknown actors are okay at best while the known actors (Aaron Paul and Juliette Lewis) go through the mannerisms of a separated couple fighting for child custody with all the aplomb that professionals can muster. Some of the scenes bristle with atmosphere like shots of a late night ferry or the beers littering a front porch as seen in early morning light.

Despite a few flashes of insight into the minds of people desperate to break out of their squalid surroundings Hellion, more often than not, feels like an afterschool special masquerading as an indie film. Rightfully so, the initial engagement at the Sundance Cinemas Houston will feature post-screening Q&As with director Chandler and assorted cast members. Indie filmmaking and how Hellion was made will be center stage. The following is a list of the Q&As:

One Response to Begin Again & Hellion

Work Hard, Play Hard: The Best of The Week