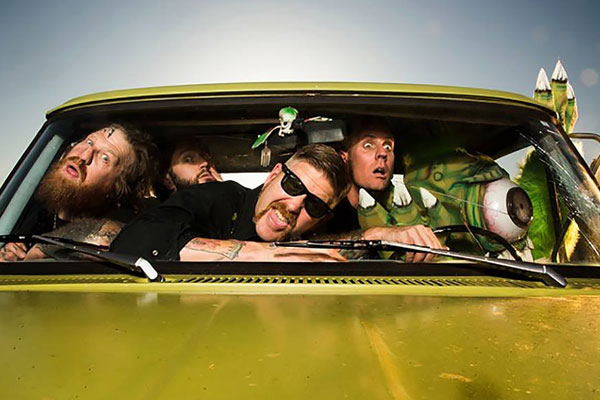 If you’re planning on attending this year’s Free Press Summer Fest, there’s more than enough bands that are worth your time.  The lineup this year is one of the most diverse in the festival’s history, and will bring our city together as varying genres mix it up in NRG Park.  One of the higher energy acts performing at the top of the list, is Atlanta’s metal ambassadors, Mastodon.  In fifteen years the band has set the bar high by releasing concept albums, video albums, and igniting stages all over the world.  Here in support of last year’s amazingly well-crafted album, “Once More ‘Round The Sun,” the band will cover all of their bases in a set that’s bound to impress casual and longtime fans alike.  FPH got to sit down with lead singer and drummer, Brann Dailor to talk about what the band has in store for fans at the festival this year.

FPH:  You guys have been around for 15 years, does it feel like it’s been that long?

MASTODON:  I don’t know really.  I guess everyone experiences time differently, but it doesn’t feel like it’s been fifteen years.  Though, for me, sometimes I still look at the nineties like it was yesterday.

FPH:  It seems with concept albums and video albums, that the band has really embraced doing things differently.  Does it feel that way for y’all or do you just do what you do?

MASTODON:  We just do what we do.  We’ve always strived to be different and separate ourselves from the herd.  It’s always nice for us to try to surprise ourselves with every release.

FPH:  The new album, “Once More ‘Round The Sun” is really strong.  The songwriting really feels like you guys have hit your stride, and it hits sonically like you want a metal album to hit.  Does it feel like you’re at the top of your game as far as songwriting goes, or are you your own worst critic?

MASTODON:  I love the songs on the album, and I feel like they’re more developed and even leaps and bounds from our stuff in the past.  There’s a comfort level we have with songwriting that’s nice, but at the same time, I don’t want to rely on it either.  We’ll definitely mix things up and change it on the next album so we can keep it fresh and different.

FPH:  I saw that you’re reissuing a super limited edition of “Crack The Skye” on blue vinyl.  Is there a reason for that or was it just a chance to do it that presented itself?

MASTODON:  We’re just vinyl nerds, and we want to see our stuff on cool colored vinyl.  There’s bands that we all follow who do the same and so we want to put out our stuff in the same cool way.  I love colored vinyl, it looks so cool.

FPH:  You’re a drummer who sings, and you can actually sing well and play drums well.  Have you ever realized what a small portion of the music world can do that and do that well?

MASTODON:  I don’t really think about it at all.  Traditionally, I know the lead singer is supposed to be out in front, leading things.  I know people look at us who haven’t seen us before and think, “The drummer sings?”  But, we lost our lead singer early on, and for a long time we just split up the vocal duties while we looked for a new singer.  I don’t think at this point we’re really looking for a lead singer anymore.

FPH:  You guys seem to be a big hit on the festival stages.  Do you guys prep a set that’s reflective of the time allowed or do you just play the set you’ve been using on tour?

MASTODON:  When we headline a show, we play the new album and go deeper with the songs we choose to play.  On a festival set, we try to keep things at the level where the longtime fans will enjoy themselves, while playing more of the popular songs for the more casual fans.  We try to appeal to everyone when we play a festival and lead with our best foot.

FPH:  Speaking of festival performances, it’s really hot here in Houston, are you guys ready for the Houston heat at this year’s FPSF?

MASTODON:  I don’t think the heat will be an issue and we play in the heat all the time.  We’re definitely ready for it.

MASTODON:  It’ll be a high energy and hard rockin’ Mastodon show where we play our tunes for everyone who’s there.

Houston, if you’ve never seen Mastodon perform, then I’d highly recommend catching them at the festival this year.  Performing Saturday on the Neptune stage at 9:00, these guys bring a crazy amount of energy to any stage that can handle them, and leave audiences forever changed afterwards.  You can still grab tickets at fpsf.frontgatetickets.com but grab them while you can before you miss out.