Decrease Font Size Increase Font Size Text Size Print This Page Send by Email
The Grand Budapest Hotel takes place over a period of time ranging from 1932, to 1968, and into the 1980s. All three periods are shot in a different aspect ratio, from boxy to widescreen. Yet again, Wes Anderson has proven that he’s one of the most unique voices in modern cinema.

Leon casino, Free Press Houston sat down with Anderson last Tuesday during SXSW. Anderson was wearing a brown corduroy suit with brown desert boots and a knit wool tie with horizontal black and white stripes. Anderson, who lived in Austin when he attended the University of Texas was quick to point out how the city had morphed in the nearly two decades since he lived there.

“I just arrived about a week ago in New York. I hadn’t set foot in America in more than two-and-a-half years,” said Anderson. “I went to Europe for the Moonrise Kingdom premiere at Cannes and I never came back. In Cannes we were having meetings with the German film boards and then after Cannes I went to Germany and traveled around.

“It’s been so long since I was in Austin in particular. Yesterday I went around UT campus, all these places I hadn’t seen in so long; and then I went to this place I used to live at – it was very strange,” remarked Anderson. “This city’s changed a lot.” 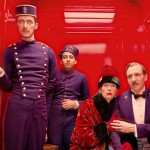 About the style of Grand Budapest Hotel, Anderson noted that “Hollywood movies from the ‘30s had a different kind of pace and energy. We gave the ‘30s part of our story the rhythms from that time.” Specifically the characters were influenced by the literature of Stefan Zweig, who was one of the most famous writers in the years before WWII. But there’s also a bit of the Ernst Lubitsch touch. Lubitsch was a European director in the silent era that made the transition to Hollywood in the 1920s.

“Definitely Lubitsch,” said Anderson. “We ended up imitating a Lubitsch kind of thing but it wasn’t something we planned. I thought we were writing something that would be slower and sadder and more elegiac. The part of the story with Jude Law and F. Murray Abraham has a different kind of pace. Once this character that Ralph [Fiennes] plays entered the movie kind of dictated that it was going to be something else.”

Anderson has expanded his universe with Grand Budapest Hotel in the sense that it contains a fair share of action and also is his first film that doesn’t contain pop songs. The orchestral score is by Alexandre Desplat. While the cast features nearly two dozen name actors two players are dominant: Ralph Fiennes who plays the hotel concierge M. Gustave and Tony Revolori as apprentice bellboy Zero.

“Gustave’s friendships with these older women, they’re romantic relationships but there are also … there’s a degree to where he’s a bit of a gigolo, he’s sort of using them. But that’s just an aspect of these relationships because fundamentally they’re good friends. They do sort of love each other, all of them, to some degree,” explained Anderson. “Gustave gets asked ‘Are you straight or are you gay?’ And he says ‘A little bit of each and not enough of either.’”

Working with a large ensemble cast was second nature to Anderson. Audiences have come to expect seeing some of the same actors in each of his films while also looking forward to new performers to the Anderson parade. “The actors don’t make up the lines but they make up everything else. And everything else is a lot,” Anderson said. “For instance, Jeff Goldblum has loads of dialogue, he has these long speeches to give. He shapes them and works them. I’ve seen him on stage quite a bit and he’s always amazing. Even after I had picked and cast the actors, once they were in their costumes and had figured out their roles I was surprised by every single one of them. They made me laugh when they would appear. Murray Abraham in particular. I didn’t really envision what his character would be. He has an amazing voice and he’s also someone who can give you a line reading that makes you understand more about his character just by the way he says it.

“Sometimes in movies I’ve had a thing where it’s a puzzle, how to get everybody scheduled. The Royal Tenenbaums was bit tricky like that. We were having trouble, one actor whose part is done almost entirely without the other actors but they have a tiny overlap and yet they’re working weeks apart from each other. How are we going to sort this out? 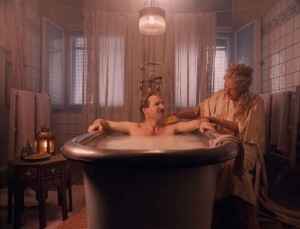 “For The Grand Budapest Hotel a few people were shot quickly like Murray and Jude and Jason Schwartzman, their part was its own little shoot and nobody else needed to be there. Harvey Keitel we had for a week but then Harvey wanted to come early because he wanted to live in the prison with his other inmates before doing his scenes. If somebody want to go live in a prison to get into character that’s amazing. Even if it seems like the craziest idea he’s doing it because he cares. The other inmates with Keitel, those three actors are very well known in Austria and Germany. Pinky, played by Florian Lukas, he’s a big action star. Another one is a television star and the other a noted Austrian actor and director,” Anderson said.

The Grand Budapest Hotel is not without Anderson’s typical dark humor. About a cat that gets tossed out a window by an evil Willem Dafoe, Anderson stated: “I’ve had a few dogs get killed, run over by a car, get hit by an arrow. In this movie we have a few dogs, like the St. Bernard who make it through, it’s just the one cat.” Smiling, Anderson mused, “If I was a cat I would want a good part. There are a lot of actors who want a good death scene. It would be unfair to the animal to take that away from him.”