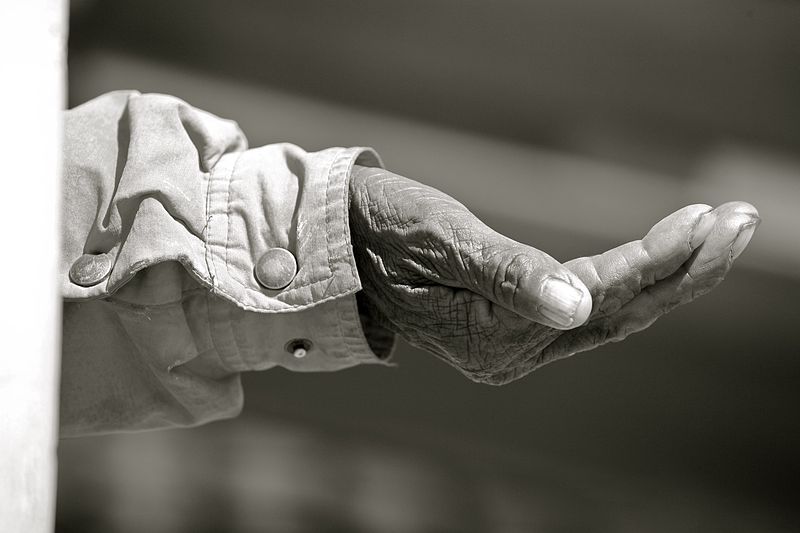 It’s almost daylight. Better get out bed and wake the kids- if you had a bed or kids you’d seen in the last 9 years.

Roll over. Rouse your wife, Gina. She wakes slowly. She’s tired. So tired. You both have been on the streets for months now. How long has it been? Five months? A year? You don’t remember.

Your name is Michael Edward Lee Porter, and this is your life being homeless.

Mornings are focused. Get out of bed. Get ready to face the day. It doesn’t matter how well you’ve hidden yourself sleeping behind Mattress Firm. If the cops catch you in bed by daybreak, they’ll force you to move.

You dislike the police. After 9 years in prison and two run-ins for stealing a car and jaywalking (yes, jaywalking), you don’t trust them. You could swear Officer Parker goes out of his way to harass you when he patrols your area.

Almost 7 o’clock. Get out, shake the blankets from your body. Better find somewhere good to hide them. Keeping belongings is hellishly difficult for the homeless. Your stuff has already been stolen three times.

It’s late. Stake out a street and fly your bedraggled cardboard sign asking for help. Breakfast won’t pay for itself. If you’re lucky, you’ll collect enough money for coffee. You’ll need the caffeine. You’ve got a long day ahead of you.

You earn money, same way every other homeless person does. Stand there and hope somebody takes time out of their morning commute to roll down their window and wave a dollar at you. It’s slow, hard, inconsistent work.

The most you ever earned in a day was Easter Sunday. Everybody must have been feeling generous, because they gave you $70. Total. It only took 10 hours.

That’s almost minimum wage. Must be their Christian spirit.

Now it’s hot. The sun is out and you’re sweating under your blue polo shirt and baggy purple pants. Both are too large. Salvation Army never has your size 29 waist, but you take what you can get when you’re homeless.

It’s so hot. You’re exhausted from standing outside all day. Fewer cars pass by your strip of road. You wander over to your Gina, who’s resting under a tree in the shade.

You and Gina have been together for 3 years. You’re not officially married, but you’ve spent enough time together that you call her your wife anyway.

Regina McCauley lived in the building where you worked as a maintenance man. It was good work. That and a fencing job brought in almost $1,000 every week.

You would have been happy to share it all with Gina. “I’s doing great,” you say ruefully. “’Till all this came up.”

Which brings us right back to a hot street corner on the outskirts of town with your wife sitting in the shade.

Gina is a trooper. She tries to fly the sign as much as she can, but she gets tired easily. The time spent out on the street has taken a heavy toll. Her kind, round face is masked by sadness and exhaustion.

Life on the streets takes it out of her. She almost passed out one time. That’s why you try to save up a couple bucks to get her into a hotel room at least once a week. The place down the street only charges $36 a night.

It’s good to shower and rest on a real mattress, not a pile of blankets behind a mattress store. Shower sounds perfect right now. You haven’t bathed in a week, and you feel nasty.

Gotta keep going. Keep standing on that street corner. Hope that somebody will take pity on you.

This is all you do. All day. Every day.

The 5 p.m. rush is over. The number of cars on the road slowly dwindles as average Houstonians return to their families and homes.

You’ve saved up a couple bucks. It’s not enough to get a hotel room, but it is enough to get some food from McDonald’s. Those golden arches are a godsend.

McDonald’s is like home base. The staff let you sit indoors in the air conditioning. They even give you free cups of water. It’s your only way to stay hydrated. Better hope the mean cashier isn’t on duty. She tries to charge a quarter for every cup.

You say hello to David, a friendly, bearded old man in a ball cap. He’s homeless and helps watch out for you. He also has crippling alcoholism. David gets the shakes if he doesn’t have a beer the moment he wakes up.

It’s good to have friends.

The McDonald’s food doesn’t last as long as you hoped. It never does. Time to go. Gotta find somewhere to stay.

Houston offers shelters under certain conditions. You have to get in line early to get a bed at most of them, and that means less time begging. Less money to buy food tomorrow.

Anybody who shows up at Salvation Army after 2 p.m. is sleeping on the floor. That makes Gina’s hips hurt.

Gina could go to Sally’s House. It’s a women’s shelter. Nice place. But it means you’re sleeping without her for a night. Only good men’s shelter is Salvation Army, and it’s already too late.

In the end, you return to Mattress Firm and crash there. Mercifully your stuff hasn’t been stolen. You huddle up next to Gina and fall asleep.

Tomorrow, you get to do it all over again.

Author’s note: I met Edward and Gina by chance one day and talked to them over a meal. This story was made from what they told me during that lunch.

They navigate what Edward calls a “sea of traumas” daily. This is what it’s like.

2 Responses to You Are Homeless