A Keg, Pizza, and Folk Music Light Up Sharespace

Decrease Font SizeIncrease Font SizeText SizePrint This PageSend by Email
Imagine a night up spent drinking beer. With folk musicians. After they played music so heartfelt you’d swear the whole thing was your own personal after party.

Leon casino, That’s what everyone who wasn’t in East End missed Saturday night: Sergio Trevino, David Dondero and Cavern Hymnal at Sharespace. Here’s how it went down:

I walked past the Dynamo Stadium, right when the rugby game ended mind you, to Sharespace. Had no idea what it was or what exactly would be there. All I knew was, someone had found me online, and asked me to review the show. Pity for every drunk and sober rugby fan who didn’t realize what they missed upon driving out of that parking lot.

Sharespace is just on the other side of the Dynamo Stadium’s parking lot. A brick building, innocuous as all East End is. It’s run by Teya Sparks, who allows people to rent room for pretty much any reason. That night it was for music. When I walked inside all I saw was white walls and concrete floor, something between a kitchen and a common area, with instruments in one corner and a keg in the other. There was conversation and pizza. There was a little waiting for the parking lot outside to clear up. But soon enough everyone outside came in, and Trevino started things off. 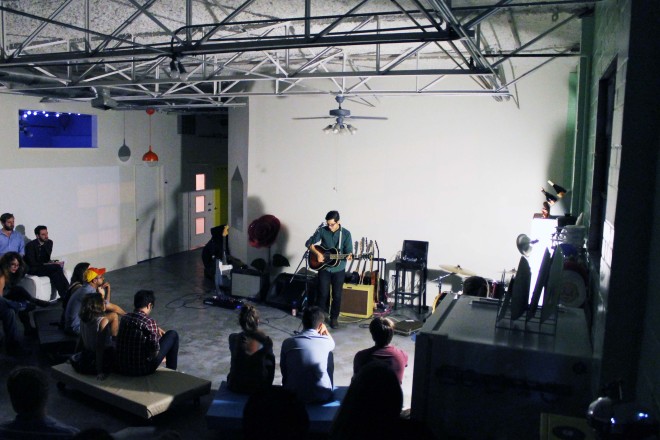 People just in from the lot turned the corner, heard those folksy vocals, the kind imitated by country singers everywhere (never duplicated by them) and froze.

That song, and every song that night, bounced off the walls like the room was designed for it. Seems like the musicians knew it too.

“This is a good one,” Trevino said about halfway in. “Trust me. Once I remember how it goes.”

On a side note to anyone in attendance, I still don’t know if he has a name for the first song.

Then there was David Dondero. A small part of me wanted to see him pick up the drumsticks in the corner, but it was wishful thinking. He stuck to his guitar. His guitar that took him around the world, got him money and got him loose women and empty handed at the end of the line. Stranded alone, broken out of his mind. 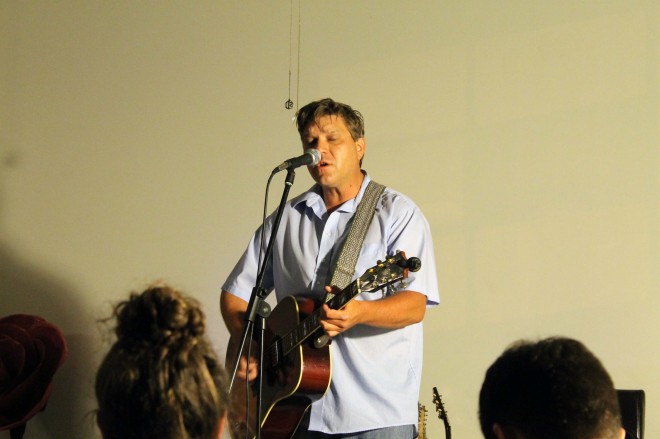 If you think those lyrics are good, ask him to play the one about your dog. Or Houston’s very own Rothko Chapel. Or the song about the girl from Houston. I ask you: how can Minnesota (and Austin if you want to get current) produce a man who loves Houston so much?

But as good as Trevino and Dondero played, Cavern Hymnal took the cake, and it has to do with a scar. 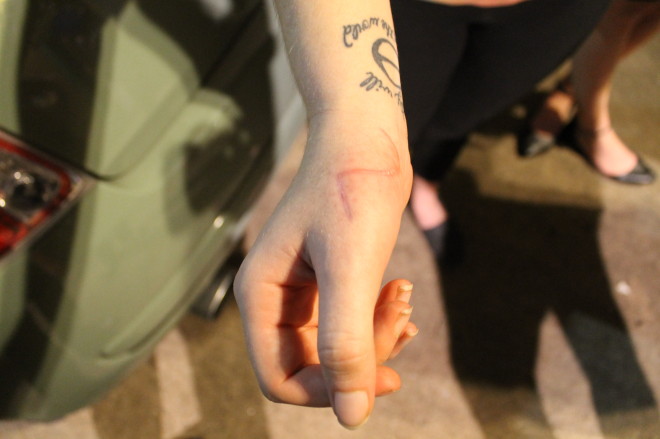 The singer, Mary Kate Spawn, has a scar on her hand in the shape of the letter “Z.” It came from surgery a month prior, a result of a kitchen knife. That translated into taking it easy on gripping things. Spawn said she hadn’t used a pick up until a week ago.

Their music was an amalgam of indie rock and folk. The strumming vibrated off the walls and floor, up your legs, and into your skull.

Cavern Hymnal played a trick however. Indie Folk music carries a certain vibe of relaxation and calm. Sharespace was well into its beer when the last song played, slow and melodic, relaxing almost, but then came a crescendo of drums and guitar like a splash of water. End on a high note? Sure, why not.

The evening left me wanting more. Considering Trevino is playing at Fitzgerald’s next week, and Dondero is going to be in New Orleans, and Cavern Hymnal is working on an EP, there’s more to come. Still, something about hearing what they sounded like in that tiny perfectly acoustic room in Sharespace, something about drinking from the same keg, and hearing them comment between songs, brought feelings that wouldn’t have come out of headphone speakers. I walked out of there with a notebook full of scribbled lyrics, a camera full of photos and my head trying to playback the tunes it had just heard. 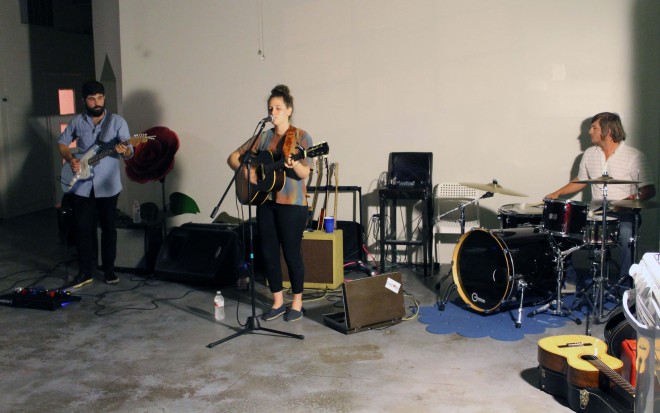 Who Gets Left Behind in the Next Space Race?

Salad Days: The Best of The Week