Decrease Font SizeIncrease Font SizeText SizePrint This PageSend by Email
In a bit of recent synchronicity two René Clair films street in Blu-ray versions. Clair may not be a household name along with other classic directors of yore but he helmed distinct classics in both the silent and sound era, and in France, England and America. The two films available for your viewing pleasure are I Married A Witch (1942) and The Beauty of the Devil (1950, La beauté du diable).

Leon casino, I Married a Witch (10/8, Criterion Collection) shows Clair’s ability to blend fantasy, romance and comedy. The film begins in the era of early-American witch trials and establishes a father-daughter team who get burned at the stake, but not before making a curse on the family that persecuted them. Their spirits are contained within a tree. Over two centuries later they are freed when lightning strikes the tree and they seek vengeance on the family descendants.

Veronica Lake with her distinctive golden locks that form a peek-a-boo across her face bewitches Fredric March, the staid politician. (In fact the whole concept morphed into the template for the popular ‘60s show Bewitched.) But this isn’t a scary film or a horror film but a wondrous fantasy closer in tone to a screwball comedy. One setting has the star-crossed lovers meeting in a smoke filled room that could represent the dimension between the land of magic and the world of corporal pleasure. Many of the visual effects would eventually find their way into popular television shows and movies. 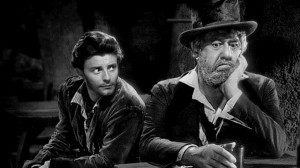 March is running for governor and after Lake falls for him she makes sure he wins the election with 100-percent of the vote going to him. Of his opponent March remarks: “He didn’t even vote for himself.” You needn’t look any further for a romantic comedy that eschews cliché entanglements for inventive cinematic machinations. The black-and-white transfer is stunning.

The Beauty of the Devil (10/29, Cohen Media Group) finds Clair back in France exploring the Faust legend with legendary French actor Michel Simon as the rube who makes a devil with Satan; Gérard Philipe plays Mephistopheles.

Clair always utilizes trick photography in his films and here the trick is that Faust appears as his old self but after he makes a deal with Satan to appear like a young man he appears as Philipe and Satan looks like Simon. Clair uses his mastery of the medium to make profound statements about the human condition. Both TBOTD and IMAW have great extra features.