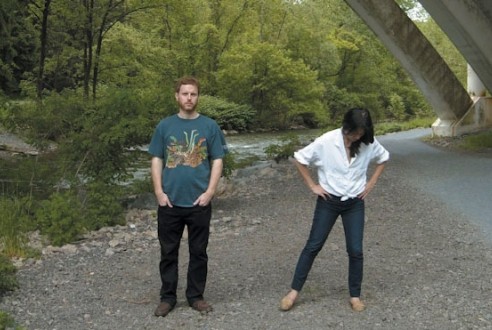 When one thinks of the blues, the word maybe evokes tradition, classicism, a music of origin and time, a thing that indicates the beginning of popular music. Control is another idea. Can one control the tradition? Can you be in charge of the origin, map a beginning to insinuate a new end? I don’t know, I can’t say…maybe?

“I think our earlier material was much more open ended, we have certain parts and then sort of improvise the end, so the songs now are in a way are more composed,” notes Russ Waterhouse, one half of the Blues Control duo, which also includes Lea Cho.

Take a song like “Open Air” (from the fantastic album Vallley Tangents - Drag City) where it is the space, it is the spacing, the bare piano melody and silence that surrounds, that creates the color, that sets the scene, that prepares the listener, it is large in its stillness, suspended in the beauty of the blowing leaf, even as the song unfolds and blossoms it is the appreciation of the gentle wind and drizzles of rain. While “Love’s a Rondo” is the barbecue and the cookout, the full on soul, the celebration.

While the music of Blues Control is of the instrumental variety, it does not miss or lack lyricism-in many ways the piano and guitar leads are as lyrical as any vocal arrangement could be. Lea   adds “”Even though aren’t lyrics there are certain melodic ideas that ground parts of the songs and sort act as a verse would to designate that part of the song.”

September 13th Blues Control will grace the stage with Panda Bear at Fitzgerald’s. To say this an event is an understatement. Blues Control are a band that plays in and to the moment, the act is human, it is the production of two musicians there in the room, alive and feeling with you.

While it is difficult to predict the best space in which to witness this magic, Cho believes that there is an element to band’s live shows that has yet to be captured in recordings.

“I don’t know if it’s volume or what,” she says, “but there’s a certain power that you can hear from us live that doesn’t quite come through on the record.”

“We are always doing new versions of songs,” Russ adds. “There are songs that we had from 2009 that we play totally different now.”

However and whenever you experience the magic, make it a point to schedule the experience. The most beautiful thing about music are the moments which are created, the participation and romance in that moment of sound and actualization, this is why the heart beats and senses imply, whether it be the physicality of a concert or the personable space, we listen to transport, to be and have been.

“When you make a record now,” notes Lea, “you never know how it is going to be listened to, as a MP3 or vinyl. It makes a lot of difference.”

In the rustle and bustle of life, it is these moments that are illuminated, in the pageant that a concert attendance can sometimes devolve into, let’s make this Blues Control show one which is digested and absorbed, and then later we can post another picture of the thing and the gang.