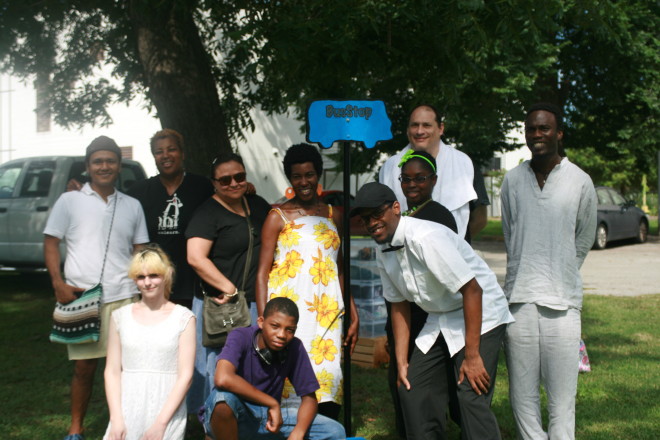 Charlotte Kennedy is an emerging Houston writer working on a collection of character-inspired flash fictions called BusStopStories. The Houston Arts Alliance is the current sponsor of Kennedy’s work. FPH caught up with Kennedy after her literary creation made its first theatrical debut this past month.

What are BusStopStories and where did the inspiration for this idea originate?
BusStopStories are twelve interactive flash fictions in reader’s theater format for outdoor/indoor performance. In this collection of what I call “the hardly ever heard” stories, seven to eight actor/readers utilize costume accessories indicative of the public-transit dependent and a minimal set and charm passersby to pause, hear, or step into a slice of the story’s action.

When my truck died two years ago in August, I turned to public transportation. When I stepped onto the bus on that first Monday morning, I immediately confronted my own ideas about people who rely on public transportation. Rather than feeling repelled, the faces of my fellow bus riders drew me to them. I began to wonder and write while commuting. Reimagining their circumstances, hopes, deferred visions, and dreams being actively pursued. Where I saw etchings of anguish, I fashioned a tale that would give reassurance. I wanted to remind their sorrow that joy stood close-by.

Sensing tedium in a day that began as many others-with public transit- I eventually decided to take a leap into magical amusement by employing devices from African American and other mythologies so that those who witnessed the enactment of BusStopStories could be re-introduced to the power of transformation.

A few months later, I submitted a proposal to the Houston Arts Alliance and was awarded a grant to launch this project.

What was your favorite experience during this voyage?
There were two. While painting signs and set pieces, I had an epiphany that all the collecting of fabric, paints, buttons, and other things throughout the years, as well as my love for reading and theater, was all I needed to take BusStopStories out to Houston’s outdoor spaces. Also, watching the cast of BusStopStories breath life into words I’d written during the debut.

BusStopStories had its first theatrical debut last month. How did the audience receive it, and what was it like seeing your words transformed into a different medium?
Amazing! Even the toddlers paid quiet, wide-eyed attention to the action and organic animation in storytelling in the park space on one of Project Row Houses properties behind the Eldorado Ballroom. I heard over and over again that not only was “Dewella’s Food Desert Greens” entertaining and visually stimulating but also that many onlookers were pleased that the story carried messages of physical and emotional health, and paid attention to the beauty and wholesomeness around you, no matter what your community gets labeled as, so you can interpret what your environment is for yourself.  Audience members weren’t as reluctant as I thought about coming forward to participate in the story. They were also thrilled to receive a sticker that reads, “I am a story in tranzit.”

What’s next for you as a writer?
Two things. We’re looking to perform “Dewella’s Food Desert Greens” in both Sylvester Turner and Lincoln City Parks in the Acres Homes area and anticipating a spot in Houston’s Fringe Festival. I plan on revisiting one of two stories, “The Antique Angel” or “For The Brother Who Is No Longer Here” and crafting it into a modern day folk tale as I’ve done with “Dewella.” Infusing the BusStopStories series with mythical elements challenges my writer’s imagination and makes for a highly creative collaboration between the Story Tranzits (actors) Ashlei Mayadia, Angela Sanchez de Bravo, Terri Crawford, Kristen Davis, Cayla Coats, Anthony Cashmere, Darius Johnson, and Christian de Bravo, the crew Ibikunle Ashcroft, and myself when I don my director’s hat. Also, since starting this journey with BusStopStories, many have approached me with their own personal stories and points of view concerning riding public transportation.  I would like to see a public space created where our stories can be shared with the world, inspire connections and insight among the many who commute.