“Houston has been a lively breeding ground for artistic innovation for decades now, and is increasingly considered a global art center alongside New York, Los Angeles, London, and more recently, Berlin,” the Contemporary Arts Museum, Houston (CAMH) boasts in its press release for Right Here, Right Now: Houston. It can sound a little hypish, but it’s true. Great things happen in Houston, but the geographic isolation of the city has always made things difficult for local artists. Tucked midway between the coasts, Houston has struggled to garner national and international attention while struggling to stem its own brain-drain among its most talented and hard-working artists.

Still, a growing number of contemporary Houston artists have been gaining attention outside of the City. Earlier this year, Lovie Olivia was showing simultaneously in Houston, NYC, and Los Angeles. Houstonian Mark Flood has taken up residence in NYC and put on his own “art fair” this past May. Rick Lowe was awarded the MacArthur “Genius” Award for his artistic work in Houston and beyond.

Robert Pruitt has spread our local culture and brought back new insights/connections through residencies around the country, and his collective Otabenga Jones and Associates (OJA) took over Brooklyn recently with Funk, God, Jazz, & Medicine. Jamal Cyrus, another OJA member, performed his piece Texas Fried Tenor (2012) this July at Walker Art Center in Minneapolis as part of Radical Presence: Black Performance in Contemporary Art, an exhibition curated by CAMH’s own Valerie Cassel Oliver, which has traveled to New York and now Minneapolis since its debut at CAMH last year.

Needless to say, there’s a lot of talent in Houston. It’s starting to get the recognition it deserves, and it’s nice to see that the CAMH, one of Houston’s largest arts organizations, is showing some support. They recently presented a retrospective of internationally-known local Trenton Doyle Hancock, and currently, CAMH has two exhibitions that feature four Houston-based artists: Right Here, Right Now: Houston, featuring solo mini-exhibitions by Carrie Marie Schneider, Debra Barrera, and Nathaniel Donnett, and Destroy and Rebuild, featuring the works of Robert Hodge. 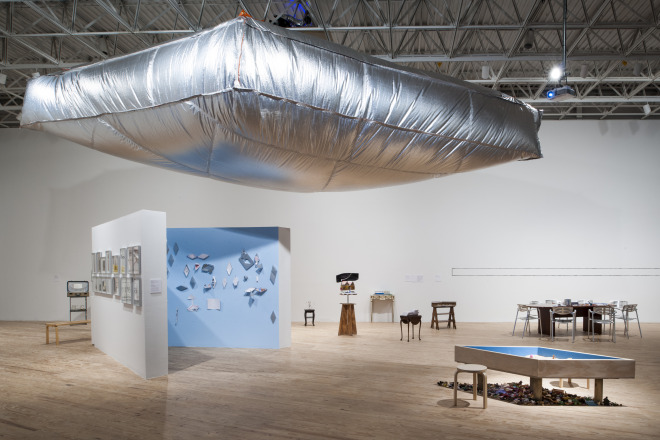 Schneider’s exhibition, Incommensurate Mapping, curated by Daderko, puts her collaborative spirit in the spotlight. Along the walls, visitors can find documentation from collaborations Schneider has spearheaded with other local artists, including Human Tour in which she and Alex Tu led walking tours around the city while wearing futuristic hazmat suits. In a back corner, hidden behind a stolen development sign, is a small, dark room with a chair situated for viewing clips from Care House (2012), one of Schneider’s most powerful installations. Referencing the changing landscape of Houston, she also collaborated with numerous artists and citizens to construct a series of sculptures that re-envision the CAMH itself as a more collaborative, welcoming, and convivial community space. 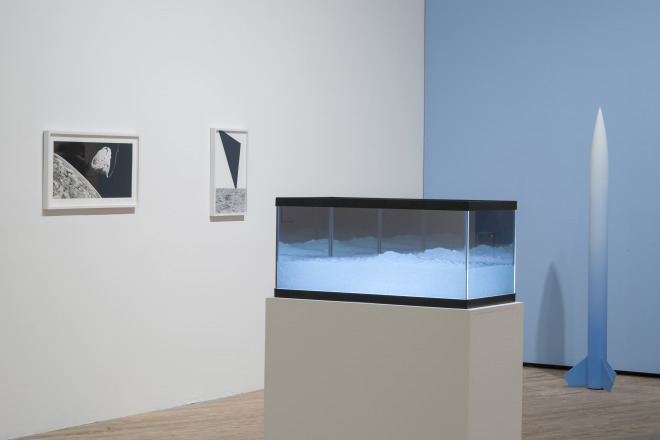 Curated by Arning is Debra Barrera’s exhibition Avalon. The exhibition explores humanity’s desire for escape. A testament to Barrera being named the artist-in-residence for the Physics department at Rice University, it also showcases Barrera’s deep connection with the sky and space, perhaps viewing it as the ultimate escape. The exhibition consists of a variety of works that portray this connection in a plethora of fashions, from the most visually literal - a giant bottle rocket sits near the entrance of the space - to the most visually stunning - a reflecting pool sits inlaid in the floor against a back wall, a void that one could spend hours peering into whether they see it as a black hole or a portal to the great beyond. Without a doubt, Barrera’s work is as smart as it is aesthetically pleasing. (Note: Many miss a piece installed by Barrera on the outside of the CAMH in a stairwell, where a playlist made by Barrera repeats on a loop.) 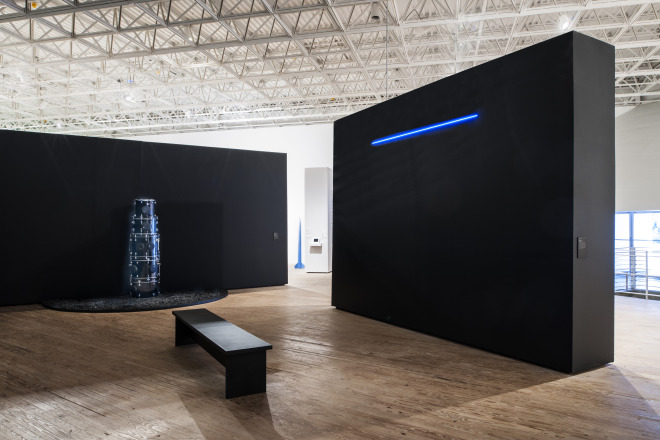 The third installation in Right Here, Right Now: Houston is Nathaniel Donnett’s Nothing to See Hear. Working with Cassel Oliver, Donnett built a sort of zen garden of civil rights references. With a drumbeat pulsing in the background, it serves as a great space to reflect on those who have worked and are working to improve the lives of black people in the United States. Of Donnett’s work (although not this specific installation), Glasstire’s Bill Davenport wrote, “…a mish-mash of familiar black artist imagery and materials… expressing well-trodden racial identity issues without adding much.”

Davenport’s point is valid, to an extent. Many black artists reference the same issues of race, history, identity, exclusion, privilege (or rather lack thereof), and from an outside perspective, sometimes it might seem as though these pieces all address the same viewpoint or experience, but each piece also adds a voice and serves as a reminder that contemporary America is anything but post-racial. The method for delivering this voice varies from artist to artist, which becomes apparent when visitors go downstairs to Hodge’s Destroy and Rebuild. 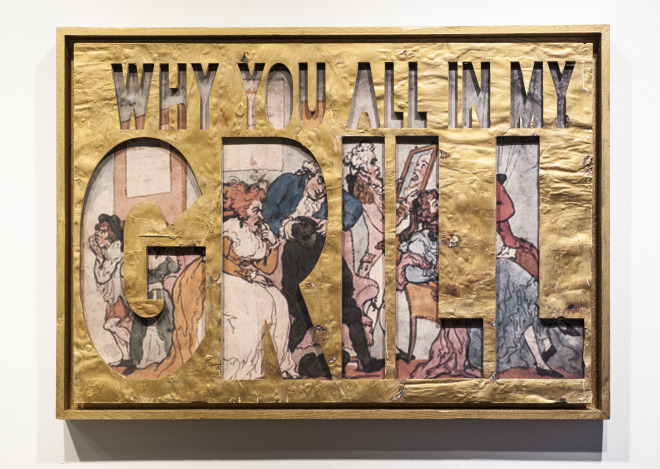 Robert Hodge, Why You All in My Grill?, 2014, 42 x 31 inches
Medium density fiberboard, and mixed media on reclaimed paper, Courtesy of the artist

Making use of a vast array of found materials and historical references, Hodge connects innumerable voices by collaging one man’s garbage over prints and paintings that display how black people have been viewed throughout history. He brings history to the present day by then cutting lyrics from contemporary hip hop into the refuse. A prime example is Anaconda. Hodge connects a modern obsession with big butts portrayed by Sir Mix-a-Lot and Nicki Minaj back to materials that reference Saartjie Baartmann, a woman stolen away from Africa to travel with a show that exploited her: Baartmann was not only carted around Europe as an object of exoticism and grotesqueness but also used by French scientists, if one can call them that, as an example of how Africans were sub-human and savage to purport the racist rhetoric prevalent in that time. Hodge, along with Schneider, Barrera, and Donnett, is among many Houston artists climbing the ranks, and when a local giant shines the spotlight on what makes our underrated arts community so great, they deserve praise.

The museum is turning its attention to its formerly silent H, and it’s on track to continue into 2015 with the Houston-born Mel Chin. Many questions come to mind, though: Will it continue? Should it? If this is a long-term change, what does the City lose by not having this forum for national or foreign artists? When we focus internally, are we fostering those within or cutting them off from outside influence? These are all questions the CAMH staff is, or at least should be, ruminating on.