Decrease Font SizeIncrease Font SizeText SizePrint This PageSend by Email
The circus is back in town in more ways than one. Cirque de Soleil presents the extravaganza Amaluna, currently at Sam Houston Race. The word derived from Latin means mother moon. This particular Cirque show originated in 2012, and after Houston the troupe moves to Madrid, Spain.

Leon casino, Amaluna unveils a fantasy world where acrobatic feats of derring-do are merged with surreal characters, mixed in with a couple of characters that provide Commedia dell’arte hijinks. I’ve been backstage under the big tent on another occasion when Cirque was in town and believe it, there are weight machines and an exercise room that offer Olympian-esque tools for muscle enhancement. Looking at the performers on display, you can only gaze in amazement at how the muscles of their being are seemingly toned and locked into the execution of a potentially death defying stunt.

Some of the physical movements that quite frankly look impossible involved juggling, where the balls just keep falling from the sky; a team of gyrating bodies doing multiple flips and twists on a seesaw, and with each bounce the guy on the other side of the pivot seems to be getting higher and higher; or a globe filled with water, wherein a petit member of the troupe shows such an ability to bend and sway you wonder what happened to her bones. All the while a group of cool metal music clad sirens wail away on wireless instruments and sing.

Another part of the show had one woman picking up several bone-like pieces of wood of different styles off the floor (bending down, or using her feet) and effortlessly balancing them until the sticks turned into the shape of some kind of animal skeleton. Then by simply removing a single piece of the structure the whole thing comes crashing down to the stage. This performance piece is slow and precise in contrast to the hyperkinetic motion of many of the other parts of the show.

Amaluna will be running daily (except Monday) until March 22.

Another kind of circus is currently housed at the Frenticore Theatre (5108 Navigation). 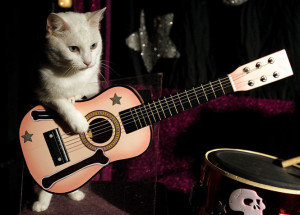 The Amazing Acro-Cats hold court until February 22. Acro-Cats are trained cats that live a life of feline luxury, have their own cat-friendly decked-out tour bus, and perform circus style for treats. The show lasts around an hour, because let’s face it – cats are only going to entertain the notion that they are interested in what we think for about that long.

After a series of cute tricks the cats perform in a band, along with a chicken on tambourine. One cat plays drums where the sticks are mounted like row-boat-paddles on the snare. Another strums a guitar, while yet another plays keyboards. The thing is, as crazy as this sounds; these cool cats are capable of playing actual music. Certainly, if you’ve ever attended a concert of John Cage music you have been exposed to the kind of discordant avant-garde tunes that are heard from the Acro-Cats.