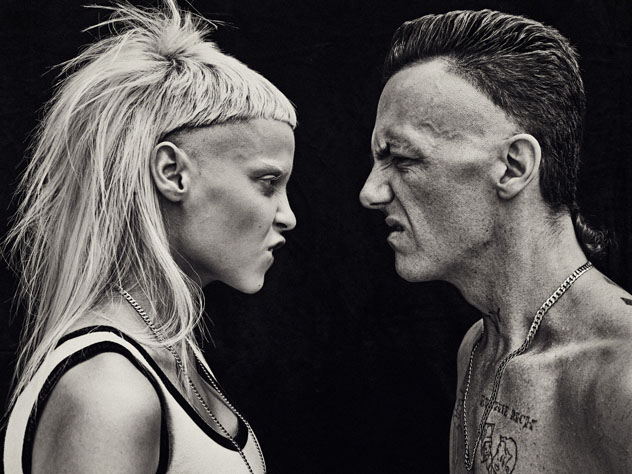 Is Die Antwoord a rap trio, a conceptual living art project, or a group of exquisitely weird misfits?   Die Antwoord could be a number of things including but certainly not limited to: a gifted satirical rap group exposing the world to the post-apartheid slum culture of South Africa, a trio of white people trying to cash in on their racial confusion and unique brand of weirdness, or a band of musicians who don’t give a fuck what anyone thinks and create whatever they want.  I have personally given up on trying to define Die Antwoord, but what I do know, is the group hales from South Africa, they just announced the first leg of their world tour “Donker Mag”, and will be performing at Free Press Summer Festival 2014.

The group is compromised of DJ Hi-Tek, who is never seen without his mask, and provides back up vocals for vocalists Ninja and Yolandi Vi$$er.  The group found notoriety after their breakout video “Enter the Ninja” hit the net in 2010.  The video quickly went viral and now has up to 20 million plus views.  “Enter the Ninja’s” beats aren’t noteworthy, the lyrics are simple at best, and the video is crass, dirty and odd, yet everything about it is infectious.  I wanted to turn away, and “Enter the Ninja” is one of Antwoord’s more mild videos, but I couldn’t.  I don’t know whether it was the combination of Ninja’s abrasive, I am a crazy rapper persona or Yolandi’s fascinatingly squeaky voice, creepy movements and bleached mullet that kept me so captivated, but almost an hour later, I had watched every video Die Antwoord had released.

The band has musically progressed in the past four years, releasing two albums, with a third one, Donker Mag, on the way.  The music has matured, their lyrics have improved and what I cannot personally attest too, but what I look forward to finding out, their live shows have gotten even better.  If you have ever read a review about Die Antwoord, or even just googled them, they have an abundant amount of proponents and opponents, but even amongst the opponents, their live shows receive amazing reviews.  The ferocity and energy at which Ninja and Yolandi perform is noted in almost every show review.   After just watching a live performance, I was impressed.  The three performers conquer the stage and whip the crowd into frenzy from the first song to the very last beat of the set.  It becomes almost visceral and one is left simply to enjoy the show.  One can intellectually dissect this band at their pleasure, and regardless of any reservations I have about their material, I am undeniably looking forward to their set at FPSF, and almost positive I am in for a foul good time.