Decrease Font SizeIncrease Font SizeText SizePrint This PageSend by Email
“Johnny Yuma was a rebel, he roamed through the West.” So goes the introduction to The Rebel, which ran for two seasons from October 1959 through June 1961. Johnny Cash sang the titular song, and Cash even guest starred as a bad guy in one episode. Interestingly, the intro to the show features the above line, while the closing credits contain the entire song, verse and chorus.

Leon casino, Before we go any further let me state that The Rebel has nothing to do with the Confederate flag or politically incorrect stances, Lynyrd Skynyrd, roots rock or anything pertaining to white supremacy. The Rebel was an exercise in existential character development a full decade before David Carradine wandered the West in Kung Fu. By and large westerns in the late-50s were plentiful and formulaic. Not so with The Rebel.

Essentially star Nick Adams a.k.a. Johnny Yuma, The Rebel was a displaced veteran of the Civil War. He returns to his hometown in an early ep to find his father the sheriff has been killed in a disgraceful manner. The Rebel takes his revenge on the bad guys and then proceeds to travel from town to town in each episode. Television in this era was fairly devoid of controversy. That’s not to say that Johnny Yuma doesn’t stand up for the rights of Indians and Mexicans being mistreated by society. Blacks were virtually never seen on television in the 1950s unless it was as a maid (Beulah, 1950-1953) or an exceptional talent like Sammy Davis, Jr., on a variety show. 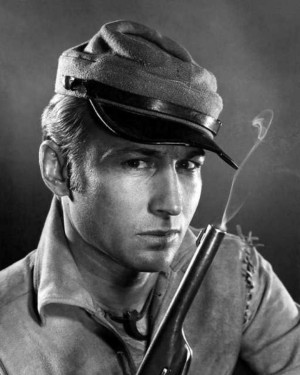 Johnny Yuma: The Complete Series (8/18, Timeless Media Group) contains all the episodes from seasons One and Two, plus some excellent extras. The featurettes include a lengthy interview with showrunner A. J. Fenady. In all fairness, Fenady also produced a pilot for a companion show called The Yank (starring Houston’s own James Drury) that was never picked up by a network. Another comprehensive interview has Adam’s children remembering the legacy of their father. Also note that then young director Irvin Kirshner directed several of the shows. Kirshner of course helmed The Empire Strikes Back.

Here’s the kicker: Nick Adams was a cult figure who was pals with James Dean and Elvis Presley, to name two figures whose reputation has outlasted their brief sojourn on the planet. Adams has not fared so well but his memory is kept alive by fans and scholars of that time.

The more you learn about Adams the cooler he becomes. Adams scammed his way into John Ford’s office, wearing his Coast Guard uniform, and successfully auditioned for a part in Mister Roberts. In the finished film it’s Adams who does the stunt where a sailor drives a motorcycle off a pier and into the water. Adams wrote a diary about his friendship with Elvis, “The Rebel and The King” that was published posthumously by Adams’ daughter over four decades after it was written. Adams co-starred in Rebel Without a Cause and had close friendships with Dennis Hopper and Dean.

Tragically Adams died of an overdose due to mixing alcohol with prescription drugs in 1968. (Hello Heath Ledger.) His death has been speculated as everything from a bizarre murder plot to suicide. But those who knew him attest that his death was accidental. Adams remained a rebel to the end.

“He got fightin’mad/ This rebel lad/ He packed no star/ As he wandered far/ Where the only law/ Was a hook and draw/ The rebel, Johnny Yuma.”