Leon casino, As of yesterday, HERO, which was passed by City Council in May 2014, will be placed on the November ballot in accordance with an order by the Texas Supreme Court.

HERO protects literally everyone in Houston, which is fantastic since Clutch City is the most diverse city in the nation. The bad news is that if it is repealed, Houston will once again be the only major city in Texas and the nation without a non-discrimination policy.

Over the last year, HERO has been relentlessly attacked for its inclusion of the LGBT community, and opponents aren’t about to back down until HERO is voted down at the polls. This means opponents will stop at nothing to demonize and dehumanize LGBT Houstonians in the process.

On Monday, Carlos Maza, the LGBT Program Director of Media Matters, published a blog on the Huffington Post arguing that Beyoncé could help stop discrimination in her hometown by supporting HERO.

The same day, Maza’s blog was shared on a small student organizing Facebook group for the Texas Freedom Network (TFN).

Ismael Melendez, a student organizer in the Rio Grande Valley, came up with the hashtag #BeyBeAHERO. Aracely Garcia, a student organizer in Houston, created a soon-to-be-viral graphic. With the help of other activists, they got the message all over Twitter. Within 24 hours, several major media outlets started writing about Beyoncé’s chance to be a hero. 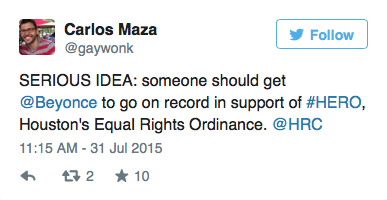 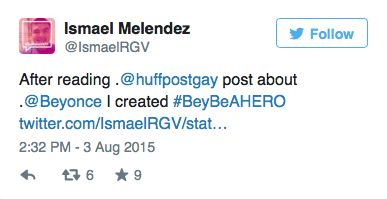 The quick action on the part of these activists has been overlooked by many, but should not be underestimated.

“Millennials are important for this election because we are young, passionate, and we are the future of our city,” said Ms. Garcia. “Local elections affect all of us more directly in our day to day lives than any other election. If there’s anything I’ve learned, it is that local policy shapes federal policy, so this is where our voice and our power really counts, where we can come together to create real change.”

Fewer than 20% of eligible voters actually turn out to vote in Houston elections, in a city of 2.2 million. Young people comprise a whopping 25% of the eligible electorate in Texas, holding a quarter of the power statewide. Just imagine what kind of power they hold in Houston if they turn out at the polls this November.

Aware of this, TFN activists are harnessing their power to get Beyoncé to publicly endorse HERO. They know her voice will bring an enormous amount of attention to the impact an equal rights ordinance will have in Houston, encouraging young people to get involved.

“Beyoncé’s support would put pressure on more businesses and high profile individuals to come out in favor of equal rights, a tactic that has proven successful in states like Indiana and Arizona,” explained Ali Gorczynski, a TFN field organizer. “Between the Super Bowl, NCAA Final Four and other sporting events coming to town, the total revenue Houston stands to lose if HERO is repealed is in the ballpark of $800 million.”

By reaching out to Beyoncé, these activists are rallying organizations and Houstonians around HERO and bringing much needed attention to an election that would likely have been ignored by many. If a handful of college students can create the #BeyBeAHERO campaign in two days, there is no telling what they–and Bey–can do in an election that is three months away.

Don’t let Beyoncé off the hook–join the efforts by tweeting #BeyBeAHERO and share why you support a non-discrimination policy in Houston. You can also pledge to fight for HERO at Houston Unites. Lastly, visit HouEquality for factual, up-to-date information about HERO. When the time comes, go vote!