Errol Morris on The Unknown Known

Leon casino, When Errol Morris helms a documentary, he puts the viewer in the driver’s seat. Morris uses a method he developed called the Interrotron, which is a kind of teleprompter that allows the subject and interviewer to look at each other eye to eye.

“I was interested in eye contact. Have you ever done a film interview?” asked Morris. “Often someone will tell you, or you will ask, where should I look? What’s my eye line? It got me wondering, could I create a device where the person I was interviewing is looking at me while at the same time looking at the lens of the camera, and as a result making eye contact with the audience.” Morris achieved the effect using two cameras cross-connected.

And it’s worked well. Morris first used the Interrotron for his film Mr. Death, then for the four characters in Fast, Cheap and Out of Control. Morris has also used it in Fog of War, a doc where Morris interviewed Robert McNamara (Defense Secretary in the LBJ administration during the Vietnam War), and for Joyce McKinney in Tabloid.

It was also used in First Person a two-season television interview show that Morris created and helmed in 2000. Among the intriguing stories was one involving an airliner crash and an engineer/pilot named Dennis Fitch who flew a disabled DC-10 for an emergency landing. The episode, “Leaving the Earth” (available on Youtube) keeps you on the edge of the seat and is especially chilling when Morris cuts to actual video footage of the plane exploding on landing. Fitch successfully piloted the United Airlines Flight 232 (July 19, 1989) despite the fact the airplane has lost all hydraulic flight controls. 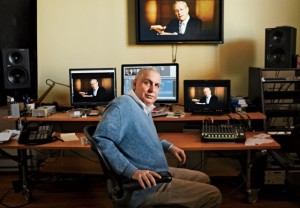 “Early on I usually struggle with titles, but Rumsfeld had come out with his memoir titled Known and Unknown,” said Morris. In the course of the film Rumsfeld mentions the known unknown, and the known knowns, and the unknown unknown, and the unknown knowns. The latter refers to something you think you know but it turns out you didn’t know. “It seemed like a great title for the movie, I passed it by him and he loved it, so there you go. We were able to agree on something.”

Morris interviewed Rumsfeld for 30-plus hours over the course of a year. “He flew up to Boston, it was 11 days all told. He gave me access to his memos. It’s an odd experience because if I came away liking McNamara more and more as I interviewed him, yet I came away liking Rumsfeld less and less. Certainly on some level Rumsfeld’s a great interview subject. He actually believed what he was saying. If confronted with a lie he was almost oblivious to that fact,” said Morris. “I would say it’s the most disturbing set of interviews I’ve done.”

Morris recently wrote a four-part article in the New York Times about Rumsfeld and the various concepts of the known knowns.

Morris admits that he’s done about 1000 commercials over the last 15 years. “Most recently I got more attention for this commercial than I got for The Unknown Known,” said Morris. “I did a series of commercials for Taco Bell where we brought together 30 people named Ronald McDonald to L.A., and each one discusses that their name is Ronald McDonald but they love the new breakfast from Taco Bell. One commercial on Youtube has gotten two-and-a-half-million hits.” Here is a TV spot Morris directed for Taco Bell.

Among the commercials Morris has worked on he mentions one that took place right after 9/11. “I was hired by United Airlines to do a series of commercials. It was right after 9/11, and we were at O’Hare Airport in Chicago and they wanted to stop and send us home,” recounted Morris. “I said no, let me interview employees of United Airlines, because this is a historic moment. Let’s find out their feelings. I insisted that they bring in Denny Fitch. At first the management said we can’t use him, he crashed an airplane. And I said, wait a second, Denny Fitch did not crash an airplane, he saved the lives of hundreds of people. He’s a great American hero and I don’t want to do these commercials if I can’t include him.”

Morris is currently working on a mystery thriller narrative fiction film titled Holland, Michigan. Reading the script Morris noted that, “I could see the visual metaphors for the story.” Holland, Michigan will star Bryan Cranston, Naomi Watts and Édgar Ramírez. “I see myself as a person who makes movies and I’d like to extend my range.”

The Unknown Known opens in Houston this weekend, and is also streaming via VOD.

One Response to Errol Morris on The Unknown Known

Love Letters in a Tree