Gareth Evans on The Raid 2

Leon casino, The Raid 2 has to be one of the most uncompromising action films ever made. The follow-up to Gareth Evan’s The Raid, the story picks up immediately after the first installment only this film doesn’t confine itself to a single building as The Raid did, but rather uses Jakarta as a background character.

At times we’re outside in killing fields or water canals watching bodies being dumped or buried; or on the highway at breakneck speed in a chase involving multiple cars and motorcycles; or inside a massive prison riot. Another prominent action set piece takes inside a large club, and yet another interior is decorated mainly in red allowing for various hues of that color when the blood starts flowing. And the blood verily flows. To say The Raid 2 is a hyper-violent film is almost an understatement. A couple of shots like a broken bottle repeatedly stabbing someone’s neck or a head being blown apart by a shotgun extend the boundaries of gore. 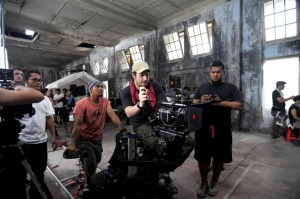 Evans comes from Wales and indeed has a distinct Welsh accent (not unlike Anthony Hopkins) but made his name as a filmmaker in Indonesia.

Free Press Houston sat down with writer/director/editor Evans, along with star and one of the film’s fight choreographers Iwo Uwais and actor Cecep Rahman. The latter two performers have no less than two dynamic fight scenes that utilize an Indonesian style of martial arts called Pencat Silat.

“Me and my Dad have watched The Wild Bunch in every single format that you could possibly watch it in. First was on TV, pan and scan, obviously not the director’s cut either. Later on VHS, widescreen in 35mm, DVD, Blu-Ray,” said Evans in response to the subject of action directors. “Later on John Woo carried that to more operatic levels with the style of editing and how he shot the action. What I like about those two directors is that you’re always aware of the geographic space, and it’s clear - who is where and what the next step might be. Every step feels organic.” 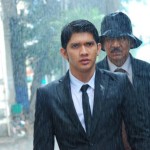 The Raid 2 shot for 132 days. “If you go to the car chase, we had plans to shoot that under a certain schedule. That kind of scene has never been done in Indonesia, there’s no infrastructure there for it,” said Evans. The production used a Hong Kong stunt team to coordinate the car chase but had trouble keeping the roads closed during shooting. “We’d get to the set at 4 am. to get ready shooting by 6:30 am., but the police wouldn’t close the roads until 8. Then when we would yell cut they would open the roads so we’re trying to reverse our positions while cars are buzzing past us, screaming at us because we’d closed the road.” When you see the end result of the non-stop stunts you’ll be amazed that the film was produced for $4.5-million.

“For the prison riot we had one shot that we wanted to feel was one long flowing shot, body after body, going up high and coming back down low. I had to look for edit points where I could put it altogether to make it flow like one sequence,” explained Evans. “I don’t shoot action with a master and then shoot coverage. Every single shot is a jigsaw piece, every shot has a definite beginning, middle and end.” 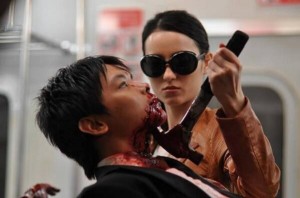 Evans has plans for a third installment of The Raid, and Hollywood is doing an American remake of the first Raid. “Raid 2 starts two-hours after the first one finished. For me the Raid 3 will start two-hours before the Raid 2 finished. So there’s a sequence where we branch off and take the story in a different direction,” hinted Evans referring to a conversational scene with some Japanese mobsters. The remake is scheduled to start later in the year with Expendables 3 helmer Patrick Hughes to direct.

Uwais explained how Raid 2’s complicated choreographed fight scenes were accomplished. “We presented [Evans] a blocked fight with five guys and he suggests an additional move to add flavor, like here smash the guy’s head into the tiles. For the full contact scenes we use body padding so we can take a heavy hit or kick without damage. If I feel the hit I can react naturally. I got hurt more on Raid 1 than Raid 2,” said Uwais rolling up his sleeve and showing me the faint scar from a machete block from two years ago.

Errol Morris on The Unknown Known

Love Letters in a Tree