Home / Featured / Will Forte on Nebraska

Posted by: MBergeron December 23, 2013 in Featured, Film Leave a comment 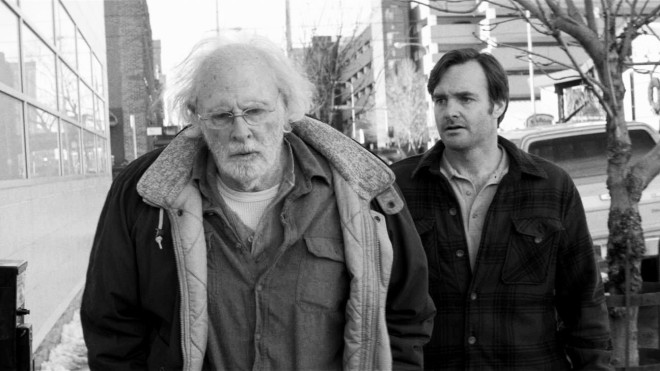 Free Press Houston spoke to Will Forte via phone from San Francisco in an exclusive interview for the film “Nebraska.”

“Nebraska” is the newest film from filmmaker Alexander Payne, director of such films as “Citizen Ruth,” “Election,” “Sideways,” “About Schmidt,” and “The Descendants.” “Nebraska” tells the story of the meeting of minds between an estranged son and father during a road trip. Purpose of the trip: The old man’s gone bat-shit crazy and thinks he’s going to collect a million dollar prize from a magazine sweepstakes two states away. Forte stars as David Grant, with Bruce Dern as the cantankerous paterfamilias Woody Grant.

“I was fortunate enough to hear about the script from my agent,” says Forte. “I felt this connection to the character. I thought there was no way that I would ever get this part. It was just so different from anything I’d ever done. I didn’t think anyone would take me seriously for something like this.

“I put myself on tape doing a couple of the scenes, sent it in and then just immediately forgot about it. About four-and-a-half months later, out of the blue, I got this call that Alexander had seen the tape and liked it enough to call me in to do the scenes in person.

“For some comedy dipstick to have any kind of positive reaction from somebody like Alexander Payne was about as exciting as it gets. I still didn’t think I had a shot at the role. I just thought it was cool to get to this level. A rational person would not put Will Forte in their movie,” says Forte.

Forte made the original audition with a flip cam. His girlfriend held the camera and read Dern’s lines. “You had this woman doing the voice of a cranky man,” explains Forte.

In truth, Payne had never heard of Forte before the audition, which is to say he was not a regular viewer of “Saturday Night Live” and had never seen “MacGruber” (2010), the starring role Forte is best known for.

“He had never seen anything I was in but after I got the job he found out that I was Paul from “30 Rock.” He had seen that but he didn’t know that it was me because for that part I was always dressed as a woman,” says Forte.

As “Nebraska” progresses Forte’s character interacts in one-on scenes with the following: a disinterested customer at the stereo store where he works; his ex-girlfriend; a woman at the newspaper of a small Nebraska town; and a woman at a magazine sales office.

“Payne’s script is such a great actor’s template, you know what you’re supposed to do at all points. There were definitely some memories of my own life that I took inspiration from. Like for the stereo salesman scene. I never want to bug people. I remember I had a job selling a Union 76 discount booklet door-to-door. I was just horrible at it. A really good stereo salesman wouldn’t let them leave that store,” says Forte.

When Forte is talking to the lady at the newspaper, a femme who dated Woody in her youth, it’s almost like we see in his eyes the life that could’ve been. The woman could’ve been his mom. “I’m so lucky because in my real life I have the life that I could’ve had,” says Forte candidly. “I have the best mom in the world. I consider myself a super lucky person. 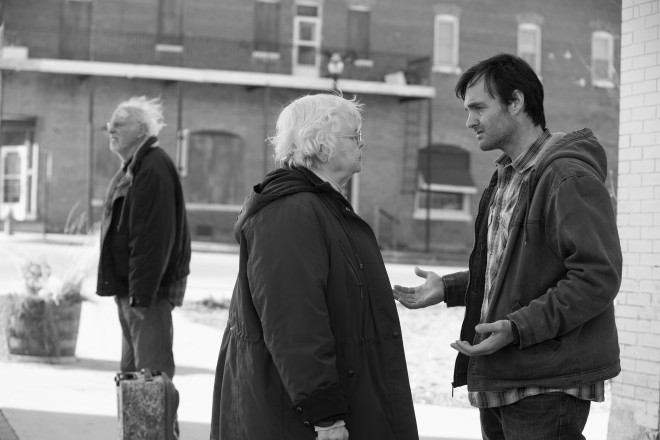 “As an actor it’s hard to work yourself up,” Forte says about a scene where he punches Stacy Keach, who plays a kind of nemesis to Woody. Forte’s character has been doing a slow burn all the way through “Nebraska,” taking abuse from his cousins about how fast he drives, for instance. “I guess in “MacGruber” I punch people and I get mad but it’s a different thing. “Nebraska” is a bigger, more absurd reality. So to do that action in a way that’s supposed to be real is new for me. That scene is a culmination of all the stuff building up in me. As my character starts to put together pieces of my Dad’s history, little by little, it’s all adding up in my head. Plus when we shot that scene I kept thinking that I was going to miss my mark and actually hit Keach,” laughs Forte.

The cast and crew shot on location on the road between Wyoming, South Dakota and Nebraska. One of the locations used was at Mount Rushmore National Park. “I was in North Dakota a couple of years ago. I was 41 years old, what is the likelihood I’ll be back, I thought. I have to rent a car and drive to South Dakota and visit Mt. Rushmore. But I had booked a flight out of Denver the next morning, so I had this very small window. I planned to drive down in my rental car, stop by Mt. Rushmore and then book it down to Denver. Once I got to Mt. Rushmore it was snowing, so that’s it, my one chance and I can barely make out the faces through the snow. I waited a while and it never got any clearer and I had to leave thinking that was my only shot. Little did I know I’d be back a year later as part of a movie shooting there,” says Forte.

“The crew was in Wyoming and we were going to see the Devil’s Tower but then we were at this place in Buffalo, Wyoming called the Occidental Hotel where Butch Cassidy and Teddy Roosevelt had stayed,” continues Forte. “That was so fascinating but we never had time to drive by Devil’s Tower.”

Austin audiences are cinema savvy and more times than not when seeing a film in Austin the vibe is like being at a rock concert. Forte comments on Austin’s Paramount Theatre: “I have only seen two movies in Austin, “Nebraska” [Last October at the Austin Film Festival.] and then in 2012 “MacGruber,” which was at SXSW. Both at the Paramount Theatre and they were each two of the best experiences I’ve ever had. You could feel the audience right there with you.”

“I just saw “Barry Lyndon” for the first less than a year ago, what a beautiful movie,” says Forte. “Someone described it like walking through an art gallery and actors are doing scenes in front of paintings. Ryan O’Neal is so good in it. And then I just saw “Paper Moon,” also with O’Neal, for the first time. What an amazing bunch of movies O’Neal was in in the ‘70s. “What’s Up Doc?” too, I just saw. I recently worked with Peter Bogdanovich [“Squirrels to the Nuts,” due out in 2014] and I had never seen his films. The chase scene at the end of “What’s Up Doc?” is so wonderfully choreographed, so funny. People need to see “What’s Up Doc?” But they should see “Nebraska” first.”

Previous: Who Benefits from the Stock Market
Next: DVD slight return: ’50s edition