Home / News / Who Benefits from the Stock Market

Posted by: Mariam Afshar December 23, 2013 in News Leave a comment 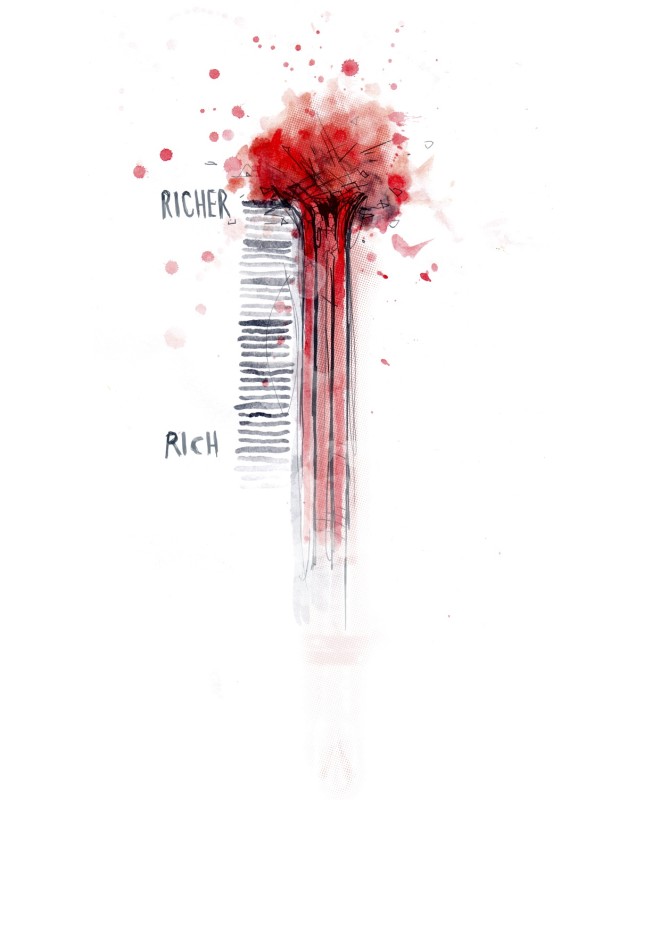 For the first time in the history of the stock market, the Dow Jones Industrial Average reached 16,000 points. This was a top news story of November, and this fact will likely only keep the stock market climbing. According to the Wells Fargo Housing Market Index, home buying and building confidence are higher than they have been at any time since the housing market crashed. Interest rates are falling and the money market is loosening, so the investors in the Dow Jones Industrial Average will continue to see their investments improve, but holding more than $10,000 is reserved for the top 66% of stockholders. The stock market climbing is certainly better news than it falling, but the cycle of the rich getting richer, at the expense of the bottom 90% (many other percentages could be applied), is only exasperated by a healthy stock market.

The Dow Jones Industrial Average is an indicator of how 30 of America’s largest companies are faring in the stock market. Companies on the list include Wal-Mart, Microsoft, Exxon-Mobil and many other well known corporations. The DJIA, or the Dow, is certainly not the entire economy of the nation-however, it is by far the largest stock group on Wall Street and is a good indicator for how the wealthiest in our country are doing. In March of 2009, the Dow dropped to approximately 6,500 points due to the global financial crisis of 2008. So the record-high indicates that the wealthiest in our nation have recovered, but there is a good chance that many others have not.

The stock market is at an all-time high, not counting inflation, and yet the percentage of Americans who own any stock is at a 15-year low. The global financial crisis of 2008 devastated the nation’s 401k and housing market, which are two of the markets that the bottom 95% of stock owners have a claim in; and this money will never be returned. According to a Gallup Poll, it is primarily middle aged and middle income Americans who are dropping out of the stock market. The irritating fact is that every so often, the nation’s elite are allowed to lose your money and recover their own portfolio.

Leon casino, Right now, 52% of Americans own stock. In the 10 years leading up to 2008, over 60% of Americans, on average, owned stock in some fashion. Five percent of stockholding Americans now own approximately 80% of America’s stock, which is a trend that has only gotten worse every year since 1983. This means that the stock market can improve and the economy can stagnate. Worker’s real wages have barely moved in the past five years, and unemployment remains at around 7 to 8%, which of course is down from the 2009 high of approximately 10%.

The 2008-2009 bailout money went almost exclusively to America’s banks and credit markets in the hopes that throwing money at the people who started the problem would fix it. It seems as though this has helped the people who lost our money in the first place, but when will the money ever trickle down? According to The Economist, 95 % of the gains from the recovery have gone to 1 %, and the median household income has dropped every year since 2007.

What allows the rich to recover so quickly?

“America’s tax code is riddled with distortions that favour the rich, from the loopholes benefiting private equity to the mortgage-interest deduction (an enormous subsidy for those who buy big houses)” (The Economist).

The most telling statistic is the $100,000 split. According to statistics compiled by the Cerulli Associates, those with less than $100,000 in investable assets on average, saw their assets decrease from $19,732 in 2007 to $17,975, by the end of 2011. Investors with between $500,000 and $2 million dollars saw their assets increase by $63,000. If you already have enough money, you will be able to let it build on itself, but if you don’t have enough money, then you are entered into a pool that allows the elite to poach you.

Fifty-two percent of Americans now owning stock is not a shabby number compared to the low figures bordering approximately 30% in the late 1980s, but it is misleading to think that these Americans own a sizeable share of the country’s stock market. We should not necessarily applaud when the Dow Jones Industrial Average goes up, yet we do have reason to panic when it falls. When the Dow Jones Industrial Average, an indicator of stock market prowess for American conglomerates, does increase, it should be viewed as an increase for the wealthy stockholders of these companies and not an indicator of the general populace’s wealth.

Previous: MIXED-RACE IS THE NEW BLACK
Next: Will Forte on Nebraska