Leon casino, The labyrinth of twists that define the plot of Gone Girl demands a kind of tight-lipped scrutiny when talking about the film. Gone Girl is based on a best selling novel so no doubt there are those that know that the film unwinds in layers that examine everything from murder, forensic crime technique, marriage and the battle of the sexes.

Even when the truth reveals itself nothing is ever black and white. Helmed by David Fincher with his usual cool, detached yet incredibly immersive style Gone Girl establishes two levels of family interaction: between a brother and sister (Ben Affleck, Carrie Coon), and between a husband and wife (Affleck and Rosamund Pike). Pike has gone missing and the couple’s house quickly becomes a crime scene. Not long after that Affleck becomes a person of interest to the police.

Neil Patrick Harris, Tyler Perry, Kim Dickens, Patrick Fugit, Missi Pye and Kim Dickens are among the players. In one of the synchronous moments we all have, another co-star Boyd Holbrook has also been in two other films I’ve seen in the last week or so (A Walk Among the Tombstones and The Skeleton Twins). 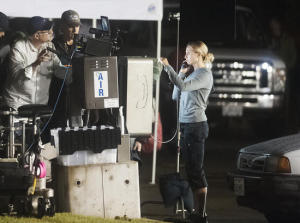 Pike has a trust fund established from a series of children’s books authored by her parents. So naturally the disappearance gets picked up by the media and turned into a national campaign to find the woman who was the role model for Amazing Amy. Pike and Affleck are both writers for publications that downsized them, thus their move from New York City to the heartland coupled with Affleck wanting to move to be near his terminally ill mother. The town of St. Louis is also a peripheral character with its bridges and conservative sensibilities.

Gone Girl provides a totally visceral experience. You feel what the characters are going through in your gut, not your head. Wow moments in the film are carefully balanced between the various characters developments that reveal how indecisive they are as people.

There’s a particular moment in Gone Girl where I knew I was in the hands of a master filmmaker. Driving in his car less than 12 hours after his wife’s abduction Affleck tunes into a radio station playing BOC’s “Don’t Fear the Reaper.” It’s a moment right out of John Carpenter’s Halloween. It’s one director signaling another director that he too is bringing the banquet to the table.

An American Girl in France