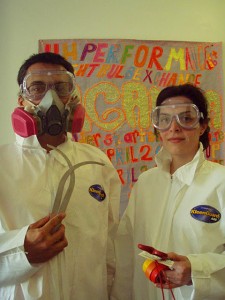 Leon casino, While Houston is a smorgasbord of art and culture, no creative outlet in this city has ever thrilled and appalled me like performance art. Thank heaven this art form is now being cultivated in our fair city. In 2007, Elia Arce, a veteran of the decadent 80s LA performance art scene, designed a course at the University of Houston, Performance Art Lab, that continued for four semesters. Students enrolled in the course were guided through exploratory exercises designed to intensify their creativity- yielding shocking and fantastically grotesque performances. From that wonderful, festering fetus grew projects that touch everyone’s lives in downtown Houston.

Performance Art Lab metastasized into a killer party/art show/night of insanity called Rainbow Evil Death Blood Fuck at The Foundry in May 2009, featuring blood wrestling, mermaids in vitrines, interpretive dance, performance art, and plenty of booze to wash it all down.

Another ridiculously awesome project with which the Performance Art folks have blessed Houston was seen at Free Press Houston Summerfest in the oppressive heat of August 2009. Eleanor Tinsley Park’s steep hill provided the force for a multi-colored paint slip-n-slide conceptualized by Patrick O’Brien. As streaks of the rainbow blended from the bodies of sliders to become a dirty purple, a passerby grabbed a hose, hosed down festival-goers and watched as folks shot down the tarp to the muddy pit accumulating below.

Since Summerfest, PAL (Performance Art Lab) has taken a more organized role in the formation of Performance Art Night at Notsuoh, helmed by the denizen of Houston performance art- Jim Pirtle. Pirtle is infamous for giving himself wine enemas, puking entire containers of salsa and reciting gibberish, dada poetry. PAL founder Julia Wallace expressed to me that she founded Performance Art Night “to create a platform for experimental performance; as a way of introducing the medium”. Many of the early performers were students of the original course, but events became more popular with local artists - including myself - who were infants in the performance scene, and we were invited to contribute their creative expressions.

After six successful Performance Art Nights, the events were moved from Notsuoh to the alternative art space, El Rincon Social. According to curator Julia Wallace, “our exhibitions include works that explore the shocking, intimate, sexual, provocative, simple and spiritual” nature of performance art. Recent PAL artists include: Daniel Adame, Jacob Calle, Aisen Caro Chacin, Bethany Fort, Melanie Jamison, Travis Kerschen, Brian and Stevie McCord, Patrick O’Brien, John Richie, John Sambrano, Emily Sloan and NICKTEEL. Information on performances found at performancearthouston.blogspot.com. From its first genus as a vehicle for the expansive teaching of Elia Arce to today, performance art has blossomed in the fertile soil of Houston. If history is any indicator, we’ll have- at least- blood, sex, and rainbows to look forward to.

After reading the article published on April 8, 2010, entitled Grotesque and Paralyzing, I found myself in the very state of your description.

After some email correspondence with you, the author, Sway Youngston and Sean Carroll, the arts editor, it is clear that the intention of this article was to create a Performance Art Lab history, but many other participating artists were intentionally disregarded and left out. Artists that worked in this group are: Aisen Caro Chacin, Nancy Douthey, Ian Fernandez, Claudia Cruz,  Brian McCord, Patrick O’Brien Doyle, Christian Ochoa, Lindsay Rae Burleson, Smitty Regula aka Drew Bettge, Nick Teel, Tyson Urich, and Julia Wallace.

It should be noted that this group was a flux of people and participants from semester to semester with many other individuals as important influences. And not all enrolled students would consider themselves members of Performance Art Lab. A list of every student would be appropriate in a complete history of this course and the eventual development of Performance Art Lab that functioned outside of the university setting.

I have made the decision at this time to communicate to the art community that I will not tolerate rampant factual misrepresentation of my work or that work that has been created in Performance Art Lab while I was in attendance. (This sentence is a reconstruction of words used by Adrian Piper to the New York Times in October of 2001.)

As one of the core-founding members of Performance Art Lab, the lack of responsibility on your part in your ill researched piece should be addressed.

For the record, Julia Wallace did not found Performance Art Lab.

As the right hand assistant for Elia’s class for three semesters, it became apparent that we had started to operate as a collective. At the time that she was mentoring me to be a leader within this collective, the aesthetics were clear and innovative within the contemporary performance art scene. But when Elia left and the aesthetics began to take a turn towards the “grotesque and paralyzing,” I realized that the aesthetics were not anymore representative of the Performance Art Lab, and it was then when I decided to leave the group.

I am in a current state of “shock” after reading your article, which should be of particular interest to you considering your use of the word multiple times in your piece.

As you know, I do not think it is one of best efforts.

I was even more troubled when learning that this was proposed as a history of Performance Art Lab, a direct statement from your arts editor.  Your information originated from one unreliable source-Julia Wallace. You used Elia Arce as your main voice of authority without contacting her for this article and did not give consideration in the misrepresentation of her in name, work, or her class.

Arce’s course was not based on the ideas that support “decadence” or “shock.” Nor should those ideas be associated with her work or interest as an artist. Her work is an intense focus on human rights for those that are underserved members of society. The words “decadence” and “shock” only support the work of Julia Wallace’s interest and your own.

Your description of this course as “exploratory exercises designed to intensify creativity – yielding shocking and fantastically grotesque performances”  hardly supports those projects created and that appear on our blog or speak of our many shows at The Artery, The Blaffer Gallery, The Joanna, and WestFest, all thoughtfully created. One of these projects is used as your support image. In that photo, the background banner was created by Nancy Douthey, Brian McCord, and Nick Teel.  The title of this piece was “Lightbulb Exchange-Aganza,” conceived by Nick Teel, created by Nancy Douthey, Brian McCord, and Nick Teel, performed by Patrick O’Brien, Nancy Douthey, Brian McCord, and Nick Teel and documentation and facilitation by Elia Arce. Participants were those living and working at Elder Street Lofts and businesses like LightBulb Exchange that provided free energy efficient bulbs for this piece. Instead, this credit was entirely omitted from your article.

Your lack in research to obtain facts for this piece furthers my skepticism of standards used for this publication. After email and phone correspondence with your editors, it is clear that you as the writer are held to low standards of factual responsibility.

Before taking Julia Wallace’s word for it, you should have taken the time to research blogs, projects, and talk to those who participated in much of the work for Performance Art Lab.

SexyAttack was a collective project and collective effort and no one person has ever been credited until this article. There have been countless hours of discussion regarding this project and this collective identity of Performance Art Lab, which was to be the name behind the project. This is no longer the case given your direct credit to Julia Wallace.  You further the power of ownership by having the “other artists” remain nameless. Perhaps this would be because you felt like in naming these people you might exclude someone you could not recall or that it would take too much space. But this is clearly not the case given your effort to list a group of “recent P.A.L. members” in your conclusion.

Performance Art Lab had also created FUNraiser in 2008, hosted by Ian Fernadez and Robin Blackwell, prior to the Rainbow Evil Death Blood Fuck, which received no mention and was the driving force behind the event. FUNraiser was an event consisting of a collection of individual and collaborative efforts and performances. These events were to raise money in order to fund other collective works by Performance Art Lab as a group.

Your description of these events, “killer party / art show/ night,” undermines the necessity for these projects to survive financially, nor does it convey the efforts to create such events. These issues are of great importance when constructing histories, especially in the context of an art form that historically and currently remains underfunded and underdocumented.

Your descriptions like, “ridiculously awesome,” “performance art folk” and additional suggestive language throughout this article dismisses the importance of performance art. It is a tragedy that Free Press has not accepted the responsibility of producing an accurate article regarding Performance Art Lab, as stated, by your editor in chief, “no one cares.”