I don’t know about yall but I have spots that I hate before I even go to them. St. Dane’s was one of them. It was one of the most obvious yuppie spots in Midtown before Midtown reminded the rest of us of falling limbs due to leprosy. I guess you could say that I would’ve (and probably did) call St. Dane’s the spots on your arm before they fell. Well, woe on me.

I took the Bagby exit off that weird feeder road that comes out of 59 at the height of Main. St. Dane’s is immediately at the right. I drove into the parking lot and noticed that it was incredibly more packed than I thought it was going to be. Fortunately, someone was leaving their spot right in front of the entrance. As usual, parking the Whiskey Waker (my car) in a lot with nothing other than Beemers and Audis (‘cuz you know, Mercedes and Jaguars are no longer cool) makes me chuckle and remember that I can’t be super obvious about my flask.

Walking in my, defenses instantly go down — they were playing Chicago (only the world’s best band ever to be alive). Groovin’ and struttin’ I walked up to the only seat I could find without making it obvious that I was looking for a seat. Luckily for me, I sat at the bar. (Before you think ill of me I’ll have you know that I say that because the bar was so full that having to wait for someone to bring me food or drink to my table would’ve been an eternal feat.)

Once I sat down I was instantly attended by Chelsea, the bartender. She was clearly busy but still pretended to be patient when I asked her my usual silly questions of ‘What’s the cheapest drink?’ and ‘Omg. Are you serious?! That’s your cheapest?!’ In the end, I got a $7 mini-pitcher of domestic.

All of the above is ultimately irrelevant. I went to St. Dane’s for the steak.

I sat down at the bar and ordered myself a steak, a steak with French fries and corn. I sat there drinking my beer for less than 15 minutes when my steak showed up. At first I was pretty peeved because the plate was plastic and the food looked gross so I ordered steak sauce (which I never do). Boy was I a fool. 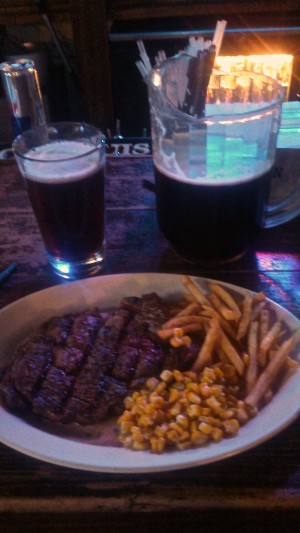 The steak was delicious. Granted, the black pepper taste, at first, might’ve been a bit overwhelming for those with a refined (read: delicate) palate. I really like black pepper so I didn’t mind, but then, once the first couple of bites were in my belly, the flavor eased up and became, honestly, delightful.

Now, don’t get me wrong. I’m fully aware that the meat used wasn’t the highest quality, or that the seasonings weren’t crafted in Cordon Bleu, or that the chef didn’t live in Paris for 25 years. I’m fully aware of that. My point is that the ribeye steak that I had tasted delicious. I just wish my sides would’ve been that good. My fries were pretty much crispy air and my corn tasted like bathsalts (not the drug) ((I hear…)) I enjoyed my food so much that I completely forgot about my beer and the music that was being played, and believe me, that rarely happens.

Steak sauce barely touched, I realized that my food was gone. I was about to freak out because I didn’t remember finishing it and thought someone stole right from my plate. It’s ok though, I didn’t freak out, I remembered that I had in fact finished my steak and that that cloud I fondly remembering chewing on was actually the steak.

As the youth might say, TBH I think I enjoyed myself so much at this spot because of the music. This was the first time I was at St. Dane’s so I don’t know if they always have such an amazing musical selection, but the night I went I was absolutely astonished. They played my favorite genre — adult contemporary — they played funk, they played 90s pop, they played radio-style ragamuffin. Drunk me was groovin’ the eff out of it.

Now for the elephant in the room; the major flaw about this place is its patrons. Walking in, the air is instantly infused by chemical cologne and perfume. I heard the phrase, “Do you have any diet wheat beer?” within 10 minutes of sitting down. Someone had to be CONVINCED to take a shot that was bought for him because it was his birthday, but I think, worstly, their bathroom sucks for drugs. Once again, please don’t get me wrong. I was once told by a friend that if a bathroom doesn’t lock and/or it doesn’t have any tags inside the stall then it is no good for drugs. I’m an equal opportunity writer so it is my job to think of even those that the society does not deem worthy — that’s the only reason I bring up my last point.

All in all, St. Dane’s was an enjoyable experience regardless of what I was expecting. The food was good. The music was good. The drinks (at least the pitcher) were reasonable. As much as it might pain me, I think I’ll be going back to this place.