Leon casino, The comedy scene in Houston is on the rise, and for one young improviser, that means bringing the community together. Jamie Meeks is a rising improv star and this fall she’ll debut her brainchild: The Comedy Collective. She said she considers The Comedy Collective an outlet for local sketch groups, stand-up comedians, and independent improv troupes, and it will include people from every improv theater in Houston.

The Comedy Collective’s inaugural show will be a double feature and will take place on Saturday, Sept. 27, 2014 at the Midtown Art Center. The first shows will simply be short and long form improv, but future shows will also feature sketch and stand up.

The first show is at 7PM and features three troupes. Watson & Watson are a duo that take you down a mysterious but hysterical journey. Gigglepants is a short form improv troupe from the University of Texas in Austin. They’ll make you giggle your pants off! To close out the first show is Baby Knuckle, a long form improv troupe from right here in Houston. Together they will form a completely improvised 20-30 minute Harold-esque playground, kicking it off with an organic free form opening and then exploring that connected universe with richer than rich characters that you care for and fear, stories you must hear, and laughs your belly craves.

The second show kicks off at 9PM. This show opens with Youngbloods, an improv comedy team of well-rounded citizens who describe themselves as “better than bathing in kittens while being serenaded by Bruce Springsteen.” The second troupe performing is Our Quarter Life Crisis. Our Quarter Life Crisis presents you an improvised sitcom based on a group of friends going through the trials and tribulations of their quarter life. Closing out the evening will be Ophelia’s Rope. This duo will ask the audience for an number, a number that corresponds to to a Shakespearean sonnet. This sonnet will inspire Ophelia’s Rope to set out on a journey of interpretation, merging the ideas of classic Renaissance literature with the activities of today’s world.

Jamie Meeks has many ideas on how The Comedy Collective can grow after these first two shows. Eventually, she would like to open her own theater using The Comedy Collective as a stepping stone. Though Jamie would also like to host a comedy festival, she’s holding off on calling these events “festivals.”

“Right now I’m not calling it a festival (because) technically I’m just ‘producing shows,’” Jamie said. “When you say ‘festival,’ people think it’s only one per year, and I definitely want to do way more than that.”

For now, Jamie is just looking to host shows at the Midtown Art Center or local bars. She considers bars a nice setting for late night shows because bars help reach an audience that might otherwise not see live comedy. Plus, there’s more booze. Speaking of booze, there will be free brew from No Label Brewing Company at the shows on the 27th.

Jamie Meeks started her improv career in 2013 while she was spending time in Los Angeles. She took some classes at The Groundlings, the famous theater whose alum includes a whole bunch of past and current SNL cast members, television writers, and major film stars. When she returned to Houston, she knew she needed to continue doing improv. She began at ComedySportz in June 2013, where she worked on her short form and then in November 2013, Jamie started taking long-form classes at Station Theater.

Jamie recently graduated from Station Theater in late July. She’s currently taking classes at Beta Theater, and she’s also taking as many workshops as she possibly can, including an improv intensive at Second City in Chicago. 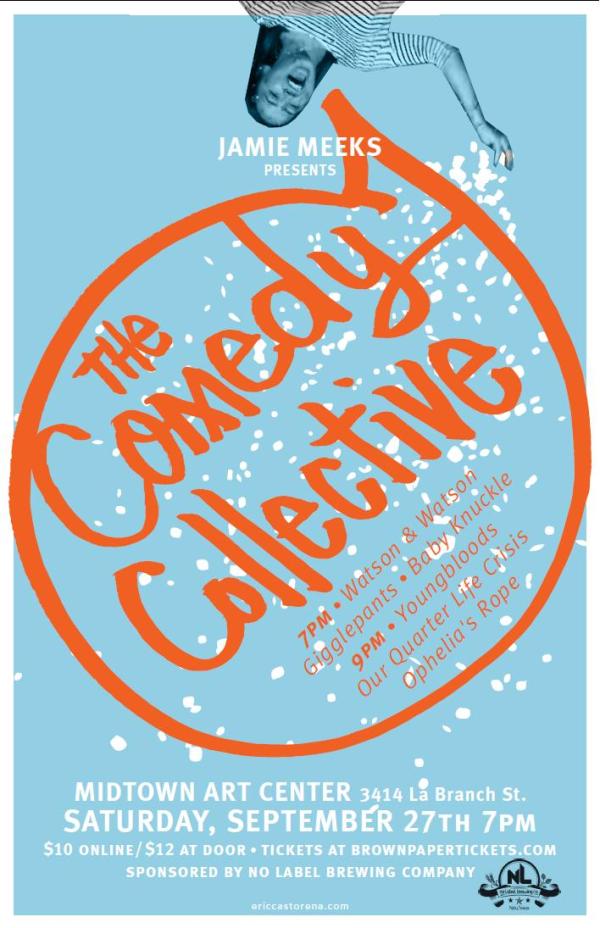 Sleeping Giant: The Best of The Week