Decrease Font SizeIncrease Font SizeText SizePrint This PageSend by Email
It’s one of the most unbelievable films ever made. And yet through the use of action set-ups, editing and cinematography the movie Roar becomes a relentless action thriller that pits human against animal.

Leon casino, Shot in a pell-mell fashion over a period of years in the 1970s, when Roar was released in 1981 it only played overseas and made a fraction of its $17-million budget. Throughout the production the film was shut down due to injuries to the cast as well as natural disasters.

Roar was never released in the United States. At least until now. Drafthouse Films, which obtained the theatrical rights through Olive Films, opens the film in select venues on April 17, marking its American premiere.

Free Press Houston spoke to one of Roar’s stars by phone. John Marshall acknowledged he didn’t even know the film was being re-released until he started getting calls from the press. “This film was released everywhere in the world but not America. The whole family went over to Australia for the world premiere,” says Marshall. “I saw audience reactions and I went off for a month where every single day it was a new city, a screening, newspapers, radio, television. I get nightmares when I watch it now. I got my first good night’s sleep the other night since I’ve started doing this press thing in the last two or three weeks.”

Roar was a passion project for then couple Noel Marshall and Tippi Hendren, who maintained an animal sanctuary at their ranch north of Los Angeles. They enlisted their children from previous marriages, Melanie Griffith, John and Jerry Marshall, to round out the cast. 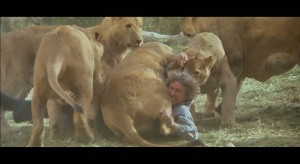 Animals in the line-up of over a hundred big cats include such hammy felines as Togar, Robbie and Gary (Robbie’s son). While the film takes place in Africa, and there are establishing shots that were lensed on that continent, most of Roar was shot at the Shambala Preserve in Acton, California.

From the Roar press notes: “When Roar started shooting, the animal cast numbered 132 lions, tigers, leopards, cougars and jaguars, plus an elephant, three aoudad sheep, and a variety of exotic savanna birds including ostriches, flamingos, marabou storks, and black swans.”

In pre-production, every animal trainer in Hollywood warned the filmmakers against having two grown male lions in the same shot, much less over a dozen at a time.

“Dad and Tippi would often go to Africa. One time in Zimbabwe they saw this house overrun with lions and thought it would make a great movie,” says Marshall. The press notes say the house was in Mozambique but you know what? Both countries are next to each other like Texas and Louisiana, so it’s safe to assume the house was in the general area described.

On the advice of the animal trainers the couple started to raise their own cubs. “By the time we got financing for the film, they were starting to get pretty big,” says Marshall. The family originally started collecting the cats when they lived in Sherman Oaks but they eventually moved to their ranch for more open space as well as to appease nervous neighbors who were complaining to police when the lions would show up in their gardens. 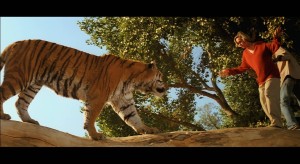 “I lived in Sherman Oaks with Tippi and Melanie and my brothers. We had the ranch at the same time. We raised the cubs so they were separate from their mothers but we also had big cats. When animal control would catch us we would send the big ones to the ranch,” says Marshall. He remarks that he was the coolest kid in high school since everybody knew he lived with lions. John would take a pet tiger, on a leash, down to Marina del Rey. “All these girls would come over and want to pet him. I would come back home with a dozen phone numbers.

“Then I lived on the ranch for two years of prep. Working on the house, set construction stuff like that,” recalls Marshall. “We kept getting all these different species, we started getting tigers. There are no tigers or mountain lions in Africa,” laughs Marshall.

“When we started filming we became different people to the cats. We’re not the guys that are in charge; that they respect. We’re acting like we’re running from them and being afraid. I was the one that got in the most trouble because I would stand up to my father. There were times where I just said ‘No. Melanie doesn’t want to do that scene or I don’t want to do that scene.’

“It takes a long time to set up a shot, you have three or four cameras and you’re shooting into each other so you have to camouflage the cameras with tree branches. It takes a long time,” says Marshall. “We got the shot off before lunch. What you do is have the 15 lions in a holding area so that they want to get out. When we start shooting I’d limp and drag my foot like I’m injured. Survival of the fittest. If you act injured the cats get excited. So I’m dragging my foot and I cluck like a chicken and now they want to chase me. 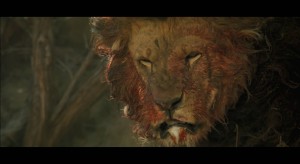 “They start rolling the cameras and I’m running and acting afraid. They run after me and trip me – these lions are my friends, except Donny,” emphasizes Marshall. “Donnie is six-inches away from biting me on the ass. I just turn around a smack him in the nose. My father yells ‘You ruined the shot.’ And I replied, hey but I’m not on the way to the hospital.

“We were supposed to film for nine months and it took five years of principal photography. By about year three we’re all getting kind of tired. The animals that you grew up with and slept with and nursed as babies don’t even remember you anymore. All they remember is the people that are running and hiding,” says Marshall.

To maintain continuity Marshall kept his beard throughout the shoot that he had grown while in pre-production. But after downtime he would get a call where someone would tell him, “We’re going to start shooting in two weeks, you need to lose eight pounds.”

At one point a flash flood destroyed the ranch along with the movie set. “It ruined the editing room, the chems were totally filled with mud,” says Marshall. The film had to be washed and cleaned by hand. “We shot 1-million five-hundred-thousand feet of film.”

As terrifying as some of the scenes are this is a family film both literally and figuratively in the sense that it feels like a Disney nature film gone amok.

Roar was shot by the brilliant Dutch cinematographer Jan de Bont, known now as the director of Speed (1994). “This was his first film in America, and to my father’s credit he discovered Jan in Holland, where he was very famous,” says Marshall. If a scene had 10 lions Noel Marshall and de Bont would add several more.

“To be involved with this movie you had to be a bit of a lunatic. In hindsight it was lunacy.

“If you look at movies shot in the late-70s they look like they were shot in the late-70s. But Roar still holds up and the reason is that Jan shot all the exteriors with carbon arcs,” says Marshall. “The interior lighting was fixed, all you did was turn on the switch. Jan did a great job, which is one reason the film holds up as well as it does.”

The actors performed their own stunts. In one scene Marshall drives a motorcycle off the roof of the house onto an adjacent lake. “The hardest part was stuff on the ground with the lions and the elephants. The motorcycle was nothing, the only thing you have to know is when the bike goes off the roof you don’t want to ride it into the water so just push it away from you,” laughs Marshall. Referring to his actual injury on the set Marshall recounts an incident where Togar bit his head: “My one real bad one was not even on a shoot day. It required 56 stiches and it took six guys 25-minutes to get the lion off of me. He was a nice lion, he just playfully knocked me down, and then jumped on my legs like any animal and bit me. 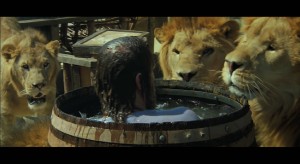 “Tippi has petitioned Congress for a law preventing people from raising animals to sell to the public,” says Marshall. (Big Cats and Public Safety Protection Act.) “I think it’s one of the big reasons why she isn’t promoting the film because it’s anti everything she’s trying to promote with her foundation. She’s learned over the years that these are wild lions. You shouldn’t live with them. None of us regret it, it was an amazing time of our lives, but we would never do it again. We lived with them and we loved them. But you can’t show any fear and you have to let them know who is boss.”

Noel Marshall was an agent in Hollywood and one of his clients was William Peter Blatty. Marshall became Executive Producer on The Exorcist, and the money he made on that hit film was funneled into Roar.

“I was on the set of The Exorcist a couple of times while they were doing reshoots. I was the runner between Blatty and my father, and every time he would finish a chapter I would go get it and read it first,” says Marshall. “When he finished the final chapter Noel wanted me to get it to Warner Brothers immediately so I got a friend to drive me so I could read the conclusion in the car.” 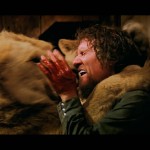 Marshall relates a story about Gunther Gabel-Williams (1934 – 2001) a famed circus animal trainer. “He said in an interview once ‘This is the only leopard in the world that can do this.’ He had the leopard draped over his shoulders. Well, we had a leopard, Buster – I have pictures somewhere with 30 people who have Buster on their shoulders. If you were strong enough to pick him up he would sit on your shoulders, he didn’t give a shit, as long as you gave him a piece of meat afterwards.”