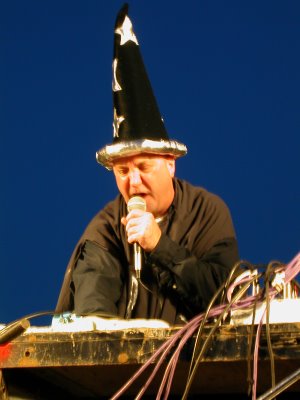 John Muzak loves noise and loves performing it for people. That love radiates through performances that have brought him accolades from such non-noise bands as Drop Trio, Chango Jackson, and Guy Schwartz. Unfortunately, accolades don’t often get J.Muzak (or Houston Noise for that matter) much love in the local press. Performances in San Franscisco and Amsterdam be damned, here in Houston we see hacks getting paid to write witless columns dismissing the Houston Noise Scene as losers who can’t play their instruments. To these dismissals J.Muzak simply shrugs, “What’s funny about that is I used to write story songs with a Casio and a four track - mainstream stuff really. I even won second place in this songwriters contest for a country song I wrote called ‘I Want To Go To The French Riviera.’ That was back in 1992 but you have to understand I grew up with 60’s music – Jefferson Airplane, Beatles, Stones – and I played in a rock cover band with my brother when I was 17. I got into experimental music around ‘91 but I didn’t really ever see a noise show until 2000. But once I did…” Muzak doesn’t finish the sentence; he simply punctuates it with a big smile.

Chuck Roast of Vinal Edge experienced the birth of John Muzak first-hand, “He was musically a normal customer named Marty who didn’t know anything about noise. Then he got into the Legendary Pink Dots and would come into the store and give us these cassettes of music he’d made. At first they weren’t very good but then he brought in this tape where in it he was shouting, “Marty is dead! Marty is dead!” Suddenly he was no longer Marty but John Muzak and it was amazing stuff. He came in blind but damn if he wasn’t going to do it! That was the charm. He just put his heart into it. But that’s John, he isn’t trying to be cool – he’s just being himself.”

The turning point, as J.Muzak explains it, was a show at Sound Exchange. Hearing about the show on KTRU, Muzak walked into a show featuring Rotten Piece, Dethkraut and Black Leather Jesus. He was immediately hooked! Don Walsh then invited Muzak to a Commerce Street show. “Here was this music with this free feeling, it wasn’t structured, and you could do whatever. I wanted to do it but I didn’t know how but then I saw Domokos doing a Pink Cloud with just a microphone and a couple of pedals. It was noise! Crazy words! Sound on sound! I was inspired! So I went out, bought a mic and some pedals, and I began practicing at getting those sounds and learning to manipulate that sound.”

But J.Muzak doesn’t just manipulate sounds on stage - he gives a performance. When people first see J.Muzak the first thing that hooks people is his costumes. Let’s face facts; a guy performing in a wizard outfit will immediately disarm even the most hardened audience member. Chuck Roast loves this about J.Muzak, “What separates John from many experimental artists is his lack of pretension – a pure innocence. That’s not what you see with 9 out of 10 noise bands. Most are serious - they dress in black and have dark imagery - but John comes in with a wizard’s hat or dressed as a clown. You almost think he’s a kid having fun banging on a keyboard in a seemingly random way. And it’s absurd that this kid banging on a piano would leave home to do this in front of people. Noise artists are just so serious. They sit there not smiling, turning knobs, and looking serious. That’s not a show! Why am I looking at some guy with a fucking laptop? That’s boring. But John will give you a performance and he’s smiling.” 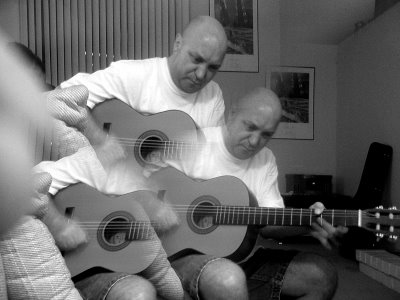 If you want to hear J.Muzak in a more straightforward manner you’d have to catch him performing as Acoustic? where he performs songs simply with an acoustic guitar but as John Muzak you will hear something quite different - a swirling pastiche of sound. Shaun Kelly of Rotten Piece suggests that J.Muzak’s music has a “Jazz vibe to it in that, like a jazz musician, he is constantly deconstructing the songs.” Yet that swirling chaos isn’t as random as it seems, “You don’t want too much sound – too much is just brutal noise. For me, I don’t want a consistent sound – I shift sound and noise, raise and lower the volume, blend the sounds, bend the sounds…it’s manipulation of sound but these are songs – written songs.”

I look at John and ask him what his wife thinks of all this. Then John sheepishly says, “She prefers the acoustic stuff. ” I ask him why that and not the John Muzak performances. He thinks about it for a second and laughs “Honestly, she thinks it’s a little crazy.”

Join John Muzak for his birthday party on September 14th at Super Happy Funland. Guests will include Last Bastions, Porch Creeps, The Annoysters and others.