Infinity runs both ways: this way (getting bigger — infinite) and that way (getting smaller — infinitesimal). A thing can never grow so large that it can’t hypothetically be larger, still…or so tiny that it can’t get even tinier. Each of us are on a connected ‘grid’ that is smack dab in the middle of forever…and that’s not some new-agey, mumbo-jumbo. That’s a very coherent, ‘matter-of-fact’ type statement.

So, we’re on this little back-water planet which is revolving around a relatively mediocre yellow-dwarf star (of which there are billions in this galaxy) found on the edge of a pretty run-of-the-mill galaxy (of which there are billions in the known universe). When you look at your wonderful self in a mirror, no wonder you can feel pretty small. But then you remember….it goes both ways. (Check out this great interactive tool if you still don’t get what I’m getting at.)

What’s inside your body? In each atom is an infinite amount of space going inward, ever smaller. Inside of each atom, what type of life could flourish? Could there be an equivalent to galaxies and stars and planets…and life? Remember, if you were physically small enough, the space inside an atom could be similar to the size of our planet in the known universe. Think about that. Have civilizations of intelligent, sentient life flourished inside of the universe which is one of your atoms? Did they go through natural & societal evolutionary cycles, learn to interact with and control their environment, bond together in communities, invent art, music, and language, dream up religion, commerce, and government, until they eventually ran their course and disappeared?

‘But, I’m only __ years old…’ you say? Well, in our reference of time and existence you are. Remember, everything is relative (Einstein). You are an inconceivably massive thing which engulfs this one atom ‘universe’ inside of you. 20 or 30 years in your ‘divine’ realm may register as eons in that infinitesimally tiny microcosm.

Could intellectual and divergent life exist on that level? Well, you and I exist…and next to many of the structures of our known ‘outer-verse’, we are beyond tiny. Insignificant.

And how many chances are there in your body that this one atom filled with a micro-verse could exist?

According to scientists, an average person weighing about 150 lbs, will have approximately 7*10 to the 27th atoms in her body. That’s 7 followed by 27 zeros (7,000,000,000,000,000,000,000,000,000). That’s a lot, isn’t it? And remember, each one of these atoms holds infinite space inside. Smaller and smaller, on and on. What are the chances that just ONE of these atoms filled with INFINITE space holds a universe inside of it, much like ours (of which we know relatively VERY little about)? I’d like to think they are very good. 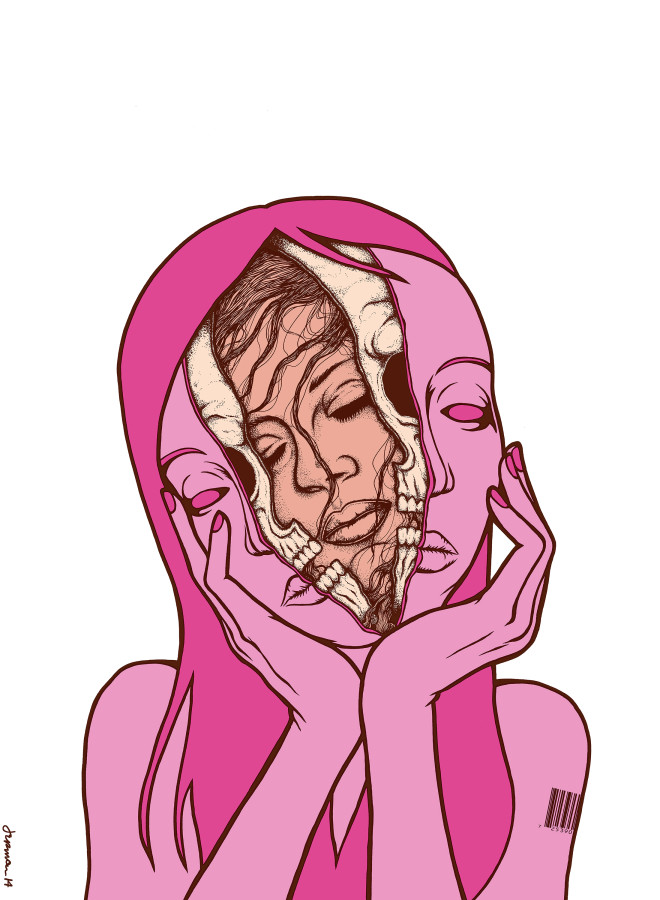 In fact, I’m personally certain of it…whatever that’s worth.

My body and your body and the body of everyone you know is teaming with universes. Look at yourself in a mirror. By base traditional human standards, you are a God.

By more scientific and logical standards, though, you are a multi-verse. And you’re just a notch on a grid that runs infinitely ‘this’ way and ‘that’ way.

SO, in 2015…keep your shit together. Have fun, take chances, don’t be afraid to try new things and leave behind some older things. Let yourself feel love hard and let yourself feel anger…hard. The older I get, I think the secret of experiencing existence on this physical plane is to tune in and intimately feel the PHYSICAL. Ecstasy, pain, lust, anger. A human BEING. I may be wrong. You and I are vibrating on a physical plane where things break down & deteriorate after so much time. Sometimes, ideas do that as well. So, don’t be afraid to change your mind about things. Over and over. It means you’re unsure about things, and that keeps possibilities, options, and hope in play. We are all here for just a moment. Enjoy it.

Just remember to take care of yourself. An untold amount of civilizations are depending on you, even if they don’t know it. What a GRAND thing you are!