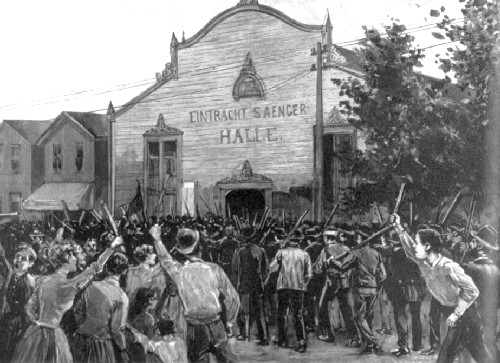 Monday, September 1, will mark the 120th celebration of “Labor Day” as a legal, national holiday. What is the history of the “Labor Day” holiday? It had a turbulent, complicated beginning. Understanding more about this can help us to rethink the significance of this holiday today.

American labor in 1894 was a volatile force. The industrial revolution had radically transformed work, replacing skilled labor with machines, and giving birth to two powerful new institutions: factories and corporations. The economy had been rocked by deep depressions – 1873-1878; 1883-1886; 1893-1896 – when millions lost their jobs and millions more experienced wage cuts. Massive numbers of immigrants – an average of half a million a year between 1880 and WWI – arrived and applied for the low paid, dangerous unskilled jobs that were available. After the brief experiment in political and economic democracy called “Reconstruction” (1867-1877), the four million freed slaves, their descendants, and their northern relatives, found themselves stripped of their newly won rights, from the ballot box and the workplace to the school room and public transportation. Women’s suffrage advocates, who had hoped that the ending of slavery would quickly be followed by the extension of voting (and other) rights to women, were deeply disappointed. None of these developments took place without a struggle, and there were strikes, protests, marches, and rallies continuously in the last decades of the century.

In the summer of 1877, a strike against wage cuts (for many, their third reduction since 1873) among railroad workers from Martinsburg, West Virginia, to St. Louis and Chicago. Tens of thousands, from highly skilled engineers to largely Black and immigrant track-layers, struck. In some places, strikers fought with other workers, who were desperate enough to cross picket lines. When several state militias were called out to protect the strikebreakers, violent clashes ensued and there were deaths on both sides. In some places, militia members refused to fire on workers and they put down their weapons and joined the protestors. For 45 days, the nation’s rail traffic, the heart of its transportation system, was disrupted.

While the railroad strike did not succeed, it had planted new ideas about organizing and strategy among workers. In the 1880s, as the economy recovered, a new labor organization, called the Knights of Labor, swept the country. It took in the unskilled as well as the skilled, immigrants as well as native born, women as well as men, and black as well as white. Its motto was “An Injury to One is the Concern of All,” and, in many communities, its members actually practiced what they preached.

Activists in the Knights, frustrated with long hours (many workers toiled twelve hour days), low pay, little political voice, and general social disregard, hatched a radical new idea: that all workers should strike on May 1, 1886, for a universal eight hour day, and that none would return to work until all had achieved the new standard. This dramatic, unified action would not only bring them the demands they wanted, it would transform their relationships with each other across the country, and it would change the ways they were perceived by the dominant culture. A lot was at stake. 340,000 walked off their jobs on May 1, and their numbers grew each day.

This struggle came to a climax at the country’s largest factory: the McCormick Harvester Works in Chicago. There, Knights of Labor activists used rallies and picket lines at the plant gates to appeal to all the workers, especially the newly hired immigrants in the unskilled jobs, to join the great strike. On May 4, the Chicago police moved in, accused the union leaders of holding rallies without a permit, and ordered the crowd to disperse. Someone threw a bomb into the ranks of the police, who in turn opened fire on the crowd. Seven police and four strikers died, and many more people were injured. The leaders of the strike were arrested and put on trial for murder. Eight were convicted; four of them were hanged. This repression sent a chill through the new labor movement, but it also made martyrs out of the strike leaders, and it made May 1st a labor holiday throughout the world, including parts of the United States.

The new ideas and strategies, particularly the practice of broad-based solidarity, picked up again in the early 1890s. In cities across the country, central labor bodies united local unions from a wide range of trades and occupations. These central labor unions organized solidarity when any union went on strike, and in some cities, they supported independent political action. In 1892, two dramatic strikes – in July at Andrew Carnegie’s flagship Homestead Steel Works, and in November in New Orleans, beginning on the docks but spreading throughout the city into a general strike – again saw the kind of solidarity between immigrants and native born, between white and black, and between skilled and unskilled, which had characterized the Knights of Labor. Among railroad workers, employed by the country’s largest corporations, labeled “robber barons” by the newspapers, a new organization, the American Railway Union, led by a charismatic speaker, Eugene V. Debs, gathered all railroad workers together into one industrial union. In April 1894, facing the kind of wage cuts which had spurred the 1877 upheaval, ARU members struck James J. Hill’s Great Northern Railroad. This conflict led to a showdown in Saint Paul where a striker, Charlie Luth, was shot and killed by a strikebreaker outside an East Side boardinghouse. Charles Pillsbury, head of the huge flour milling company, called Hill and Debs together and mediated a settlement, in which Hill rescinded the 10% wage cut he had imposed. Railroad workers around the country were inspired – and sprang into action.

In June, the workers who built Pullman (sleeping) cars in a Chicago suburb called “Pullman” (a company town in which the employer owned the houses, picked the police, and controlled the schools and stores) rebelled when their wages were cut 25% but their rents were not reduced. They sent word to Debs and asked to join the ARU. Debs welcomed them in, and then called on railroad workers across the country to “boycott” Pullman cars, that is, refuse to move any train which had a Pullman car in it. Some 125,000 railroad workers joined what was, in effect, a nationwide railroad strike. President Grover Cleveland called out the National Guard to police the railroad yards and the roundhouses, but they could not force the strikers to return to work. Pullman’s corporate attorney, Richard Olney, the former Attorney General of the United States, went to court for a federal injunction ordering an end to the strike. The grounds? The strikers were interfering with the shipment of the nation’s mail! Most trains had not only Pullman cars but also U.S. mail cars. The federal judge issued the court order (the first ever federal injunction against a strike) and ordered Debs to call off the strike. When Debs refused, the judge found him in contempt and sent him to prison, where he spent the next eighteen months. In a matter of days, the strikers went back to work.

It was within this context that President Cleveland asked Congress to pass legislation making the first Monday in September “Labor Day.” With one hand, he allowed the country’s greatest labor leader to sit in a prison cell, while, with the other, he created a national holiday celebrating labor. Cleveland was also careful to direct workers’ celebration away from May 1st, which had become an international labor day. He took his cue from the New York City Central Labor Union, which had been celebrating an early September “Labor Day” since 1882. A number of other city and state labor organizations had followed this example. They stayed away from the May 1st date because it had been so badly tainted by the anti-radical backlash that swept over the country and the labor movement in the late 1880s. And so early September seemed an acceptable option to the president, his advisors, and the political establishment.

Despite its official and non-radical identity, “Labor Day” offered the occasion for the labor movement to express solidarity. Parades, pageants, picnics, and rallies marked the day across the country, complete with banners emblazoned with the symbols of particular trades or expressing labor slogans and mottos. Workers listened to speeches, engaged in political debates, and joined in collective songs. Union members’ families were an integral part of the labor movement. Labor Day allowed for the building of a labor culture.

Over the next century, the vitality of “Labor Day” ebbed and flowed with the overall energy and life of the labor movement. After a rather quiet 1920s, Labor Day revived in the 1930s and 1940s only to fade in significance in the 1950s and 1960s. In the tumultuous 1980s and early 1990s, stimulated by PATCO, Hormel, Staley, Caterpillar, the Chicago and Detroit newspapers, and the struggle against the North American Free Trade Agreement, not just picnics and parades, but also expressions of solidarity and militancy became widespread once again. These patterns were as apparent in Saint Paul as they were anywhere else.

As we mark the 120th celebration of “Labor Day,” the labor movement is in an extraordinary period of change. The movement is pressed by changes in the structure of the economy and the organization of work, on the one hand, and by virulent anti-union hostility typified by the Koch brothers, the Tea Party, Walmart and many other corporate giants, on the other. But labor is also energized from within by fast food and retail workers who demand a living wage, immigrants who seek to be recognized for their work and paid appropriately for it, public employees who know that their work contributes to the public’s quality of life and are sick of being scorned in the political pulpits and mass media, college professors who want full-time jobs with economic security and the opportunity to control their own classrooms, and home healthcare and daycare providers who want to throw off their invisibility and be appreciated, in our society, for the important work they perform.

A great history lies ahead.

One Response to Looking Back at Labor Day’s Turbulent Origins