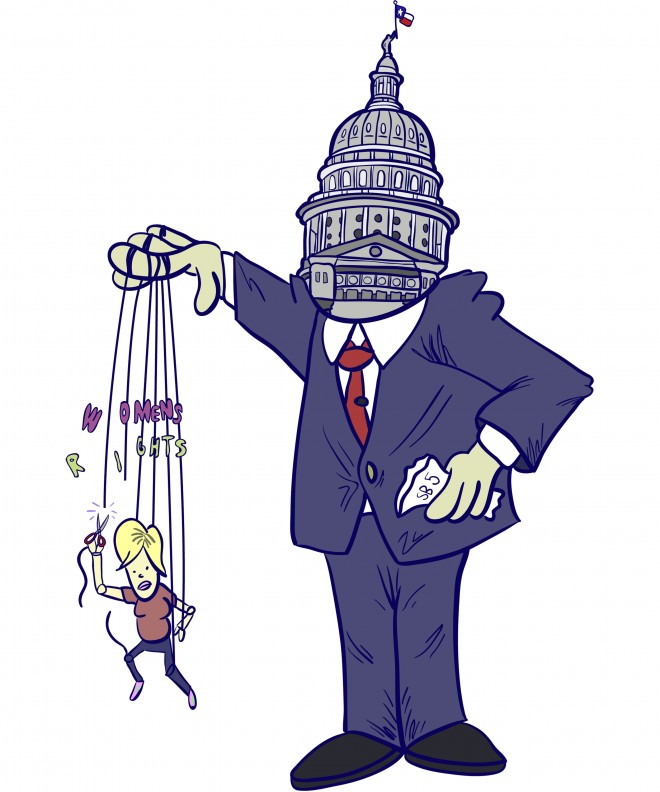 It appeared nothing short of a miracle when the 83rd Texas Legislature came to an end in May and not one of the 24 anti-choice bills had even made it to the floor for debate. Pro-choice activists and women all over the state slept a little easier that night knowing that women and their families weren’t going to, at least for now, be forced back into the dark ages.

We didn’t mess with immigration, abortion laws, voting laws, or school vouchers during the regular session. The anticipated tooth-and-nail moral debates were almost nonexistent on the floor this year. The 83rd Legislature was so calm, in fact, that the media began referring to it as the “Kumbaya Session.” For months, Texas Republicans received coverage from the media claiming that the “War on Women” in Texas was over and that they had no desire to debate abortion this session.

Nevertheless, Gov. Rick Perry gave the dark ages a fighting chance when he added abortion-related legislation to the special session docket. The special session is a form of life support for legislation that is deemed too important to not act on before our legislators are dismissed for another two years. This year’s special session was called to order with the main focus centered on redistricting maps. The district maps that were drawn in 2011 during the 82nd Texas Legislature were found by federal judges to be discriminatory against minority voters. Republicans used the special session as a chance to redraw the districts to their liking instead of using the maps handed down by the courts.

The supposed “Kumbaya Session” proved to be nothing more than a decoy. It didn’t take long for the Senate to take up the pro-life stance on the floor. The proposed legislation was drafted and presented by conservatives under the guise that they want to protect women. Senate Bill 5 (SB5), authored by state Sen. Glenn Hegar, R-Katy, would have banned abortion at 20 weeks, mandated that doctors who perform the procedure have admitting privileges at a hospital within a 30 mile radius of the clinic, required all clinics to become ambulatory surgical centers (ASC), and demanded that abortion-inducing drugs be administered directly by a physician. SB5 effectively took all the harmful bills that never made it to the floor for debate during the regular session and rolled them up into one omnibus bill. When broken down to its core, the regulations proposed in SB5 would have had a catastrophic effect on the lives of Texas women and their families.

Poor rural women and families will experience the brunt of any anti-choice legislation. Lack of access to reproductive care is already plaguing many Texas families due to previous attacks from legislators. Mandatory, costly, medically-unnecessary ultrasounds, 24-hour waiting periods when seeking an abortion, and defunding the Texas Women’s Health Program during the last legislative cycle have already taken their toll on our communities. The future of women in Texas is also impacted by the decision of legislators to reject $100 billion in federal funds to expand Medicaid to over 1.5 million uninsured Texans.

According to the 2011 census data, 30 percent of women and 15 percent of children were uninsured. The poverty rate for female-headed families with children was 42 percent, and 53 percent of all poor children lived in female-headed families. The census also found that women working full-time, year-round were paid an average of 70 cents for every dollar paid to their male counterparts. During the regular session, Gov. Perry was given an opportunity to address the poor socioeconomic state of Texas women through legislation that would have protected women from wage discrimination. Instead of signing what should have been straightforward equal pay for equal work legislation, Perry opted to veto the bill citing, “smart regulations and fair courts is a large part of why we continue to lead the nation in job creation” in his veto statement. This bill would have made it easier for Texas women to challenge their employers when they choose to discriminate against women and pay them lower wages than their male counterparts. The current operating system is in the business of keeping women trapped in poverty, and anti-choice legislation has the same, but deadlier, impact.

Currently, there are 42 abortion clinics operating in the state of Texas. SB5 would have closed down all but five of the current operating clinics. Forcing clinics to become ASCs is not just medically unnecessary, it is also costly and involves 117 pages of red tape. Only four Texas cities, San Antonio, Dallas, Houston, and Austin, would be left with an operating clinic. A little over 13 million women live in Texas and only 2.8 million reside in one of these four cities which means Texas Republicans just put 78.5% (10.3 million) of Texas women at risk of not having safe and legal access to their constitutional right to decide what is best for them and their families.

Even if a woman was lucky enough to live near one of the aforementioned cities, she may still be faced with significant time and financial constraints. Yet, the women most affected by this bill would have been those residing in rural areas such as the Rio Grande Valley or the Panhandle. To illustrate, if you reside in El Paso the closest of the four previously-mentioned cities to you is San Antonio-a 1,100-mile trek round-trip. Distance and costly travel expenses are further exacerbated by issues such as the mandatory 24-hour waiting period and the cost-prohibitive, medically-unnecessary ultrasound bills that passed during our last legislative cycle. These obstacles combined with the new restrictions that demand abortion-inducing drugs be administered in person, as well as requiring women to return to the same doctor two weeks later for a checkup (normally any clinic or OB/GYN for a checkup was acceptable) reveal just some of the ways in which many of our state legislators are trying to shut off access to abortion under the pretense that this legislation is beneficial to women’s health and safety.

Hundreds of pro-choice supporters showed up on the steps of the State Capitol, foiling the plans of the Texas Republicans. On the day the House Committee on State Affairs was to vote this extreme anti-abortion legislation out of committee, over 700 citizens from all over the state of Texas showed up to the Capitol and signed up to speak for their allotted three minutes. In a matter of hours, the Texas Legislature had an unexpected, almost unheard of, citizens filibuster on their hands. This went on until 4 a.m. when the House State Affairs Committee chairman Rep. Byron Cook (R-Corsicana) cut them off despite there being hundreds of people left waiting to speak. The following day, Rep. Cook called a back-alley meeting in a room that could only hold 30 people and quickly voted to open up the bill for debate on the floor.  At that point, it became apparent that the best chance state Democrats had to block this legislation was to run the clock out on the session.

The filibuster began in the House where Reps. Jessica Farrar, Dawnna Dukes, Senfronia Thompson, and many others continued the debate as long as they could before a vote was forced on the floor. If Texas Republicans truly cared about women they would have listened with sincerity to the hours of citizen testimony that was given, as well as to the pleas from concerned democratic legislators who drafted thoughtful amendments to help ease the burden SB5 would surely impose. Pleas that asked for amendments to allow exceptions to these rules for girls and women who were victims of rape or incest. Pleas for exceptions to the rules for women who are at risk of dying due to their pregnancy. Pleas to accept federal money to expand Medicaid and to restore the Texas Women’s Health Program. Pleas that would have allowed just one clinic to remain open in West Texas. Pleas to enact a statewide sex education class. Pleas to not force girls and women to have to seek solutions across the border, via underground abortion clinics or through dangerous self-inducing tactics. Not one heart-wrenching plea for amendments was given consideration by the state Republicans who were instead playing on their phones, sleeping, and joking around with each other. High fives were had by many Republican representatives when they finally passed the bill in the wee hours of morning.

When it became clear that it was headed to the Senate for passage, Sen. Wendy Davis announced her plans to finish the filibuster by talking as long as necessary to ensure SB5 would not pass. Sen. Davis spoke continuously without water, food, sitting, or bathroom breaks for 11 and half hours. Republican senators were visibly shaken at her perseverance as they tried repeatedly to strip Davis of her voice to speak for Texas women everywhere. Finally, after some questionable rulings, Dewhurst alerted Davis that her filibuster was over. The crowd inside and out of the Capitol began chanting, “Let her speak.” When silence was restored inside, Sens. Kirk Watson, Judith Zaffirini, and Leticia Van de Putte picked up the filibuster torch.  They used the rulebook in hopes that they could run the remaining 50 minutes down on the clock to that magical stroke of midnight that would officially bring the special session to a close. Watson, Zaffirini, and Van de Putte all did their best to hold their ground but a mere 12-minutes shy of success they too were stopped short of their goal. With over 200,000 people streaming the proceedings live, something magical happened. The citizens inside the Senate, who had restrained themselves from outbursts all day, relit the filibuster torch and marched it to the finish line with nothing but the strength of their voices.

This was a collaborative effort on the part of so many democratic legislators who are owed a great deal of gratitude.  But it was also the collective voice of the people demanding to be heard and respected that ultimately clinched this victory. Texas women and their supporters reminded our legislators that the power of the people will always prevail and that their utter disregard for the rights and lives of women will not be taken away without a fight. Our Republican representatives learned a hard lesson when they decided to take on women and men who are fighting with their hearts and minds on the side of justice. There is no strength greater than that of a united community that stands beside their women. The war on women is not over, but the strength of Texas women this legislative cycle proves that it will be soon.