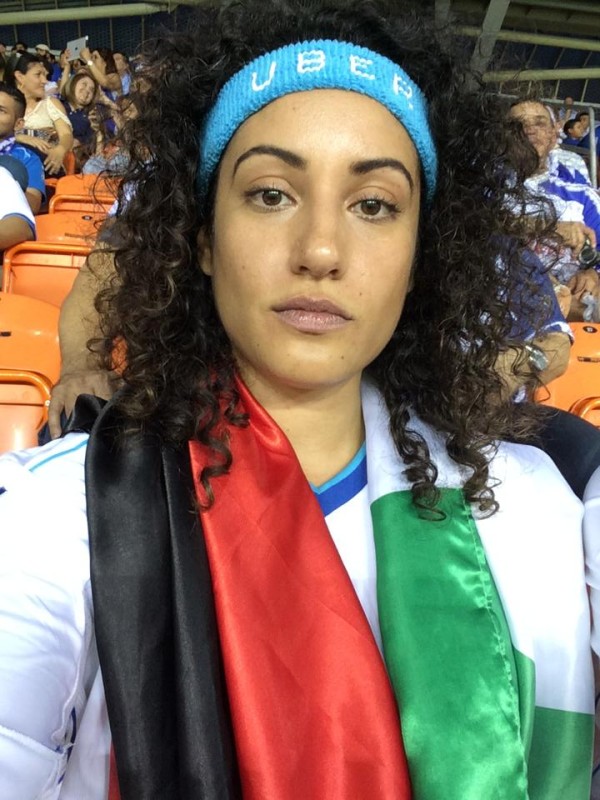 Decrease Font SizeIncrease Font SizeText SizePrint This PageSend by Email
Apparently, soccer fans are very nationalistic.  It is not uncommon for soccer fans to bring their national flag to a game where their national team is not even playing. In this spirit, a Palestinian-American woman named Buthayna Hammad brought her Palestinian flag to last Sunday’s Honduras vs Israel match at BBVA Compass Stadium.  Fifteen minutes into the game, Nathan Buchanan, head of security at the stadium, removed her from her seat, surrounded her with four Houston Police officers and three additional stadium security personnel, and prohibited her from returning to her seat until she surrendered the “racist” flag. What makes the flag “racist?”  We’ll get to that, but first let’s hear the lady’s side of the story:

Leon casino, On June 1st, BBVA Compass stadium was host to a “friendly” soccer match between Honduras and Israel. Both countries have the same national colors and a similar look to their flags. I am a big fan of futbol and I went eagerly to the match with my alt family from Honduras. I wore a Honduras jersey and was eager to cheer on this team, dressed to represent Honduras. To represent my own heritage as a Palestinian-American, I also brought my Palestinian flag. I made sure my flag was allowed (based on the size, etc.) and I was all ready to go. For the first 15 minutes of the match I stood up and cheered and stomped my feet with the rest of the crowd chanting “HON-DU-RAS” and waving my Palestinian flag, my colors vibrant and loud against a sea of blue and white…and apparently also racist. I was told I had to sit down, which I did, only to be told to get back up again and follow the manager of security away from the stadium seats and into the concession area. I followed, and there waiting for me were three more BBVA security personnel and four police officers. When I asked them what was wrong, the manager of security, Nathan Buchanan, told me I am not allowed to carry this flag because it implies a “racial slur” and it is in BBVA Compass Stadium violation. I asked him to show me evidence of his accusations and asked him how my flag, a part of my identity as a Palestinian-American, implies a racial slur. He could not answer whether he did not know or could not articulate why he was ordered to remove my flag and me from my seat. I was getting very emotional at this point, I had my flag wrapped around my neck like a scarf, and he said he would take my flag and “check it in” for me, that I was not permitted to return to my seat until I surrendered my flag. The Israeli government has banned Palestinians from hanging their flags outside their home, and arrests the occupants of the home for having it on display on their own land. Every day, in Occupied Palestine, Palestinians are denied entry to neighboring villages, to schools or their family’s home and in many cases to hospitals thanks to Israel’s apartheid state. Yes “apartheid,” that word implies racism, yet my flag implies a racial slur? I asked him several times if I could go back to my seat and he would spread his arms out to create a blockade with his body and his arms so I could not pass. “This is private property,” he said. I told him I paid for a ticket to enter. I could not keep my eyes from gathering tears, but forced myself from letting them fall. “What country are we in again?” I asked. “Just because Israel is playing a match, does that mean you should treat me this way? Because of my Palestinian identity? I am a U.S. Citizen!” I have attended many soccer matches, many of which at the Dynamo stadium, and I have worn a different national jersey every time. Why was I pulled away that day? Who ordered this singling-out and on what grounds? When I asked him if he would feel comfortable with his actions once my treatment became public, he offered a compromise which was that I could keep my flag as long as I did not wave it. The first half was nearly over; they were extended three minutes when I was finally able to return to my seat. I had spent over 15 minutes defending myself from being bullied. I missed the first half because I waved a Palestinian flag at an international match in my hometown. I am proud and honored to be an American, to be able to enjoy the civil liberties that people in many countries are not afforded, but I would have never thought that the influence of an Israeli soccer team on U.S. soil would compromise our most basic liberties.

I asked BBVA Compass Stadium to clarify their flag policy, to explain how a flag could be “racist.”  (I suppose you could say that all flags are “racist,” but still, why single out this one?)  This is what Houston Dynamo [parent corporation] spokesperson Gina Rotolo had to say:

The decision to not allow the Palestinian flag to be displayed during the game was based on the sole intention of maintaining the safety of those in attendance. The flag bearer was instigating the crowd, and we felt it was important to diffuse a potentially volatile situation as emotions began to escalate.

Of course safety comes first, so I asked Ms. Rotolo how exactly was Hammad  “instigating the crowd?” Did she threaten anybody or called for violence? Rotolo replied:

This patron instigated the crowd by waving the Palestinian flag in front of Israeli supporters.  Given that her actions caused emotions to escalate, the appropriate course of action, in our eyes, was to ask her to please refrain from waving the flag.

So…there you have it.  “This patron instigated the crowd by waving the Palestinian flag in front of Israeli supporters.” It is now considered “racist” for an American of Palestinian descent to wave her flag at fans of the Israeli soccer team.  The First Amendment can be suspended in a stadium built with taxpayer money because some Israeli soccer fans might be moved to violence by the mere sight of the Palestinian flag.  The good people of the Houston Dynamo Organization think that it is “racist” to merely remind Israeli soccer fans that Palestine exists. I am trying to imagine what the complaint sounded like.  “Excuse me, Mr. Buchanan, that flag over there is really pissing me off-causing emotional distress-and I might have to hurt the lady holding it so you better get four cops to impound that flag or else I’m going to beat her up and it will be all her fault.”

YOUR TAX DOLLARS AT WORK

Rotolo did not answer my questions about who complained, nor would she clarify the stadium policy on flags or how this flag violates that policy. She did not answer questions about which other flags are banned. According to Hammad, Honduras fans were shouting “faggots” and “motherfuckers” at Israel fans, and a fight between an Israel fan and a Honduras fan was going on just a few rows behind her, at the very time that she was removed from her seat…yet she was the one singled out for “instigating violence.”  Go figure.   [UPDATE: A previous version of this story implied that the head of security at BBVA Compass Stadium, Nathan Buchanan, reports to the Dynamo Organization. This is incorrect. Mr. Buchanan, in fact, reports the the Dynamo’s parent corporation, the Anschutz Entertainment Group.  My apologies. -HS]