Molecule to Macrocosm: the sky and the fracture at the Mariago Collective

Leon casino, In 2011, NASA Astronomers used the Spitzer Space Telescope to discover an abundance of buckyballs — the largest known molecules in space — floating in the void surrounding three dying stars. This discovery led to a theory that these molecules carried the seeds of life to Earth. That theory inspired an incredible installation by Jo Ann Fleischhauer, the sky and the fracture, on view at the Mariago Collective through April 25.

“I look at the sky and the fracture as a poetic melding of science, religion, and art,” says curator Tommy Gregory. “Jo Ann studies like no one I know; every day she works on her art and subject matter.”

The installation pulls together years of scientific research that began with Fleischhauer’s residency in the Department of Nanomedicine and Biomedical Engineering (nBME) at The University of Texas Health Science Center — although this wasn’t her first brush with the sciences. Throughout her artistic career, Fleischhauer has sought to bridge the gap between art and science — a pursuit that seems a growing trend among Houston artists such as Mel Chin, who recently reinterpreted data from the Panama Canal into SEA to SEE at the Mint Museum, and Debra Barrera, who started a residency last year in the School of Physics and Astronomy at Rice University

Meditating on the idea of buckyballs and dodecahedrons, Fleischhauer has used these shapes in multiple installations, casting and creating thousands of them over the years. These efforts can be seen in her latest work at the Mariago, as the sky and the fracture is the first exhibition at the Mariago to span both levels of the space. 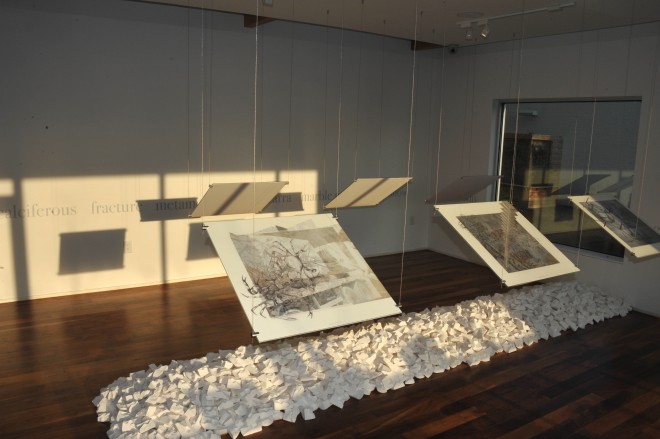 “the sky and the fracture,” installation shot, photo by Jimmy Hemphill.

On the lower floor, a series of monoprints hang from the ceiling, angled as though they sat on podiums, hovering above remnants of the casts used to create the buckyballs and dodecahedrons in the upstairs installation. The stark white of the space is representative of a marble quarry, specifically one that the artist worked with while doing research in Italy, and the casts lie on the ground, empty, blank, fractured.

The monoprints themselves consist of photographs and drawings, digitally layered over one another and drawn upon yet again. Among the images contained within are fragmented slabs of marble and crustaceans, floating in the space of the print. While the marble slabs are a fairly direct reference to the quarry, the crustaceans connect the levels through both ideas of constellations and the physical process through which marble is created. Marble is, more or less, a metamorphosed version of limestone, and most limestone is composed of skeletal fragments left behind by marine organisms, commonly crustaceans.

On the walls of this level, hand-painted text surrounds the fracture and leads viewers upstairs towards the sky. Acting as a sort of poem, these words replace the typical artist statement associated with exhibitions. Pulled from Fleischhauer’s research, they offer insight and access points into the meaning of the installation. “Quarry milk,” for example, refers to how Fleischhauer noticed the river of the quarry in Italy churned and flowed like pouring milk while phrases like “galaxea milk” tie into “constellation” or “buckyball” as they guide the viewer into the sky. 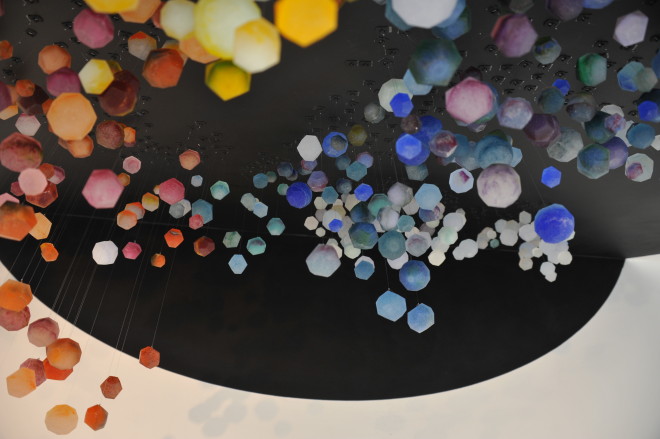 In the upper level of the space, this sky aspect consists of black circles painted on the ceiling, buckyballs and dodecahedrons hanging from them. A clear reference to stars, this part of the installation was inspired by an image of two galaxies colliding. Although some might see the circles as black holes resulting from this collision, that’s simply not how black holes are formed. Instead, they can be seen as the deep black of space finding its way through skylights, the buckyballs and dodecahedrons hanging from them drawing the stars themselves down towards the fracture. Together, they represent the infinite and the wonder, the macro and the micro bound together as well as to the earth below.

“This makes me remember going through my grandfather’s astronomy books,” Gregory said, picturing the installation’s dark voids and the objects descending from them.

Cast in the molds housed downstairs, the buckyballs, which were discovered in a lab at Rice University, and the dodecahedrons hang with no consistent shape. They don’t seem to directly reference a constellation, and the image of colliding galaxies isn’t fully apparent from the positioning itself. There is a movement, though, referenced within their coloration. Each object’s coloration is unique, and certain colors can be seen moving into one another throughout the installation. A beautiful representation of the space that only astronomers tend to see, it stands as a mirror opposite of the space below it.

While color would typically be more associated with the earth, Fleischhauer’s choice to use white marble as a representation of the fracture sets a bold aesthetic that strengthens the impact of both the lower space and the transition into the stars.

Fracture seems like a strange word for the installation, though, because while there are numerous fractures referenced within the work, between the casts, horizons, and the physical levels of the space, there is a much stronger sense of the connections between everything, from the smallest molecule to the macrocosm that is the universe.