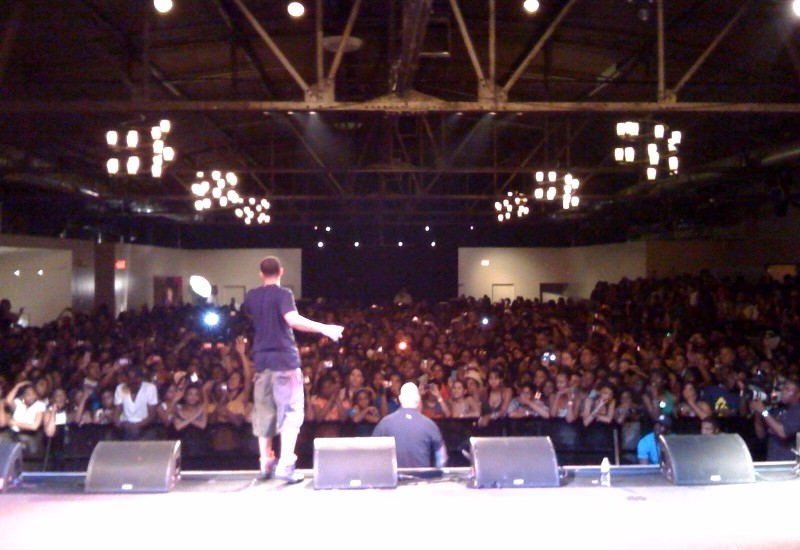 It was one of those things for a guy like me who goes out every night, or so I thought.  Yes, it would be cool to see Drake perform on a smaller stage, surrounded by adoring fans; but how crazy could it really be?  Then, within minutes, I was proven how crazy it was.  The production levels were intense, the list of hip hop stars was deep, and the man himself, didn’t disappoint.  For over two hours, Drake showed Houston some serious respect and love, and he did so in the most honorable way possible;and I was glad I gave away my Bonnaroo tickets.

So, this should all start off by admitting how crazy this whole setup was.  Most of us in the press poked fun at how disorganized and scarce on details this whole Houston Appreciation Weekend appeared to be.  I mean, part of doing this job means that you’re constantly hunting down leads and trying to find the facts behind a story.  However, even the higher ups at Warehouse Live were either tight lipped or were just plain unaware of how things were to unfold.  All I knew was that Drake’s people had denied my media request, as well as that of the other twelve that were submitted by management.  The details I was given was that they knew that the production levels would be intense, and that they were pretty certain that Lil’ Wayne was in as well.  That was really it.  We all knew that the only way to gain entry was to volunteer four hours of time to something local, through RockCorps.  So, what started as a promising hope to gain entry was pretty much hanging on the off chance of me finding a way in to report how things went.

When I showed up at the venue Friday night, I saw more Rolls Royces and G 500’s than I’d seen in a long time.  A massive line of volunteers snaked from the front almost down to the heels of BBVA Compass stadium.  After jockeying my way through guys who couldn’t figure out how to park their rides and kids in HAW shirts, I made my way to the entrance. After some confusion on my part, I was magically inside, alongside some people from Warehouse Live and a venue with about three hundred or so fans/volunteers. It seemed like a simple evening.  The security was large outside, with plenty of police presence; but inside, it was chill and relaxed.  It was obvious that extra lighting was scattered throughout the usually bare rafters at Warehouse, and that the DJ spinning prior to showtime wouldn’t have to hype the crowd all that much.   That was, until 9:35 turned to 10:05 when I noticed that my nice little spot up front had now been converted to close quarters with people close enough to wrap arms with.

Since I know what happens before an act goes on, and since I knew that this was to get going at 10:30, I did what I love more than anything, I talked to strangers.  In front of me, two guys in caps with matching colored shirts who had said that they didn’t make it to shows much because of cost.  One 19 and one 22, both said that growing up in the ward means that you aren’t making too many hip hop shows, and how they’d never be able to afford to see Drake in a regular setting.  To my left, three girls ages 18 to 23 who all said that they had never been to Warehouse Live, nor had they ever been to a concert before.  They passionately professed love for three things; Drake, Houston, and hip hop music.  They would ask me which Drake song was my favorite, or what rappers were my current faves.  I was happy to say that iLL LiaD and De’Wayne Jackson had been thumping in my car for the last month.  I told them to check out other things than Houston hip hop like BLSHS, FLCON FCKER, and Josiah Gabriel.  We discussed our love for Houston, the people that make things happen, and our love for how it feels like something big is happening right now.  On my right, one of the only people I met close to me in age; a thirty two year old woman who told me that she’d never been to a concert.  She teared up in gratitude towards Drake and his people for making this whole thing possible.  At this point, I realized that no matter what happened when the curtain dropped, this was the best part of the night.  The fact that Drake had figured out a way for our city to get some volunteer work done while giving people a chance to see him in such an intimate place was immensely amazing.  The fact that many in attendance were those who could never afford to see him any other way, was truly the coolest things I’ve seen from an artist in as long as I could remember.

Then, when the curtain fell, the image on stage was one that showed how deep Drake was in appreciation. That moment, that tied hip hop of Geto Boys to hip hop of Kirko Bangz; an on stage recreation of the original Screw Shop. It was like Drake got it, he got Houston, and he knew our hip hop history all in one stage prop.  Then, for the next twenty to thirty minutes, the door of the Screw Shop had more names exit and enter than most hip hop shows have on a whole tour;while all asking for respect for DJ Screw.  Lil’ Keke opened things up with “Pimp Tha Pen,” only to be followed by Yungstar, and then ESG.  Trae Tha Truth would soon follow with Lil’ Flip soon after and then Slim Thug would polish things off before Drake hit the stage with all the swag everyone had waited for.  October’s Very Own would not disappoint in the amount of material he would adorn the room with.  Going back to his early days in song with “Bria’s Interlude,” while whipping the crowd in a frenzy with “The Language,”  and “Up All Night.”  He even sang a duet with Tinashe on her hit “2 On.”  But, with all the songs, all the stories of why he loves Houston and why we were all there; even Drake needed a break.  So when the likes of Z-Ro, Wiz Khalifa, Big Sean, and YG made it out on stage; Houston got a real treat.  When it was done, it was done; but everyone in attendance had just witnessed a once in a lifetime event.

The show was intense in production quality and lighting, the sound system sounded better than it would if it had been an arena show, and the staff at Warehouse Live had just pulled a coup in the world of music.  All the security, the police presence, and the crew had just held that once a year event that everyone talks about; but few would get to see.  The staff at Warehouse Live presented this event with all the flair and professionalism as if it was the normal fare for them.  It was nice to see our city represented correctly in the what, who, and where; and that included the crowd.  The demographic was a healthy mix of all ages and ethnicities, all getting along for the sake of music.  Those two guys in front of me, one was African American and one was Nigerian.  The three girls to my left were a mix of Hispanic, Asian, and Middle Eastern; while the woman who teared up was African American.  The two boys behind me who I didn’t mention, the only two people who pushed and shoved me before the show got started, were White.  But, no matter the age or race, no matter the income level or concert expertise; we all came together as one.  As someone who’s lived in many of the “marquee” cities in the world, Drake’s HAW show at Warehouse Live couldn’t have gone as smoothly as it did anywhere else.  For all the stories we’re told about Austin’s music scene, or hip hop battles on the coasts; this could only happen in Houston, and it’s nice that someone finally realized that.

Broforce Review: Get it, but don’t rush