Five Things That Successful Overlords Do Every Day 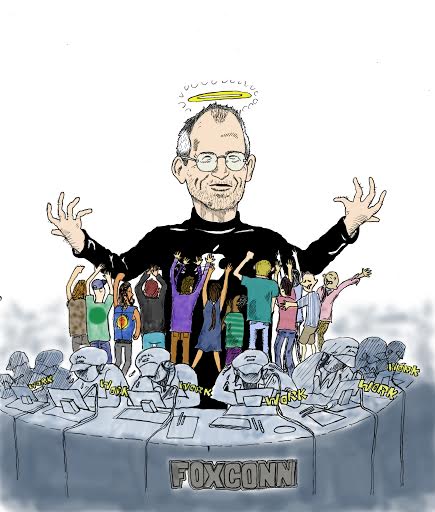 During slavery, a slave owner could check in on his slaves and see how they were living (or he could rape them for that matter). Nowadays, consumers employ countless sweatshop workers in the global South and Asia, but have never seen them. These workers could be treated better or worse than slaves, but consumers wouldn’t know. Highly successful consumers are like overlords who have no idea what their minions do, how much they are paid, or how they are treated.

These overlords don’t delight in their power. If they think about their role at all, they see themselves as contributing to positive change, creating wealth, liberating women, and otherwise making things better for their minions. Corporations provide imagery to help form this narrative. If any reports of misery among the minions manage to reach the overlords, they have ready some comforting rhetoric, such as, “that’s the fault of their own governments, which are less democratic than ours.”

You may not feel you have yet reached the level of overlord, but any consumer can improve their lot, or at least imagine they can. Many join churches, sign up for multi-level marketing schemes, buy books, and read articles that advocate philosophies for being successful. Consumers are particularly attracted to enumerated lists. Chances are you’re already doing several of the things successful overlords all around you do every day.

There are people in Haiti and Bangladesh making your underpants. It’s an intimate, yet distant and anonymous relationship. In case consumers begin to have concerns about those making their clothes, certain words are written on labels to let them off the hook. Clothes made in a sweatshop might offer a consolation, such as “made in a zero-landfill facility,” “we contribute 1% of profits to charity,” “45% hemp,” or “certified organic cotton”.

Fuel consumption is part of every consumer’s life. Fuel is required to bring products to stores and parts to manufacturers, to power manufacturing, to grow food, to create pesticides, to build and power houses, to fly, etcetera. If the cost of fuel suddenly shot up, people would starve. Fuel usage powers climate change, which seems to be on track to destroy civilization. Also, fuel and crude oil leak, poisoning ecosystems and indigenous people who live near extraction sites.

Successful overlords have many options at their disposal for not feeling so guilty about fuel consumption, such as buying a hybrid car. They tell themselves that using less gas than other drivers is a big enough step in the right direction. Some ride a bus, or even a bike to work. Consumers generally ignore the other ways in which they depend on fuel use every day, and some even deny climate change.

80 million trees a year, and 30 billion pounds of greenhouse gases help consumers put off transitioning to cleaner and more ecologically friendly butthole waterjets. Everyone can agree that a hose would do a better job than paper at cleaning up pudding on the sidewalk, but when it comes to butts, overlords demand paper. Though it costs more, recycled toilet paper is popular because it has images of trees on the package.

Successful overlords shop at fancy grocery stores that feature products with elaborate labels that bring their attention towards positive attributes. Our food usually is prepared in sweatshops, uses extremely wasteful packaging, contains unhealthy quantities of sugar and salt, employs unsustainable farming practices, etc., but fancy brands can tout being made with “100% organic cane sugar,” or “label printed with 100% soy ink”. Overlords like things that are “100%”. These consolations help overlords imagine they are part of the solution.

50 billion pounds of meat each year goes through the intestines of Americans. With a diet flown and shipped in from around the world, successful overlords enjoy a diversity of tastes that no king of the ancient world could afford or imagine. Unfair treatment of workers, climate change, unsustainable use of water, and animal suffering are just the costs of doing business. Overlords don’t like to think about these things. They watch widescreen TVs during their meals to help focus their attention on entertainment and new products.

Electronics are made by workers in terrible conditions. No electronics manufacturer even pretends that its devices are “fair trade”. Many also contain conflict minerals, which fund wars across Africa which kidnap and forcibly conscript child soldiers. Old electronics are dumped on whatever country will take them for the cheapest. The toxins can pollute the water and land of whoever lives nearby, and children are employed to pull them apart to harvest toxic valuable substances.

Since there is really nothing that can mitigate this messy impact, consumers elevate electronics beyond luxuries or even necessities. They become like spiritual objects. New product announcements become the topic of mystery and speculation. Sweatshop employer Steve Jobs becomes a visionary, an inspiration, a prophet who said:

The only way to do great work is to love what you do. If you haven’t found it yet, keep looking. Don’t settle. As with all matters of the heart, you’ll know when you find it. And, like any great relationship, it just gets better and better as the years roll on. So keep looking until you find it. Don’t settle.

This is his suggestion for overlords. In his Foxconn sweatshops, his minions receive a different set of instructions.