How To Respond To Pro-Israel Rhetoric About the 2014 Violence 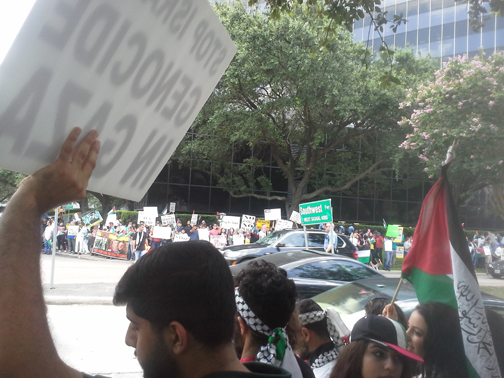 Check out the most common pro-Israel slogans and read how caring people can respond to them.

Israel has a right to defend itself.

Obama, Kerry, the news, J-Street, AIPAC, and the American people are repeating the mantra “Israel has the right to defend itself from rocket fire.” There are 3 major logical problems with this statement:

- Bombing is not defensive, it is offensive.

- Ostensibly then, Palestine also has the right to “defend” itself from rocket fire. This would mean both sides are justified in perpetuating an endless war.

- An element of “self-defense” is proportionality. You are not allowed to use a hand grenade to defend yourself from a man with a knife on a crowded bus.

Israel is only bombing places where someone launched a rocket from.

Ever? Once someone launches a rocket from your roof, that’s it? It’s never safe to live there again? Israel is killing innocent children and you’re saying it’s justified because their parents might have voted for Hamas years ago, or failed to block some armed men accessing the roof? What if we try the shoe on the other foot here… Are you endorsing killing the children of Israelis who probably voted for Netanyahu?

This is Israel’s chance to remove Hamas for good.

So, if Israel kills or arrests the leaders and a bunch of civilians in Gaza, then whoever is left will be more friendly/reasonable/rational/submissive towards Israel? There’s a lesson for the US Israeli military industrial complex from its long history of errors with Mossadegh, Saddam, and many others: If you create a power vacuum by taking out someone / a group that you don’t like, there is a really good chance that someone worse, or a worse state of chaos will take over. Israel could negotiate with Hamas if it wanted right now. Such negotiation might not be possible if Hamas is taken out. Instead, Israel wants to complain about how bad Hamas is, as if it couldn’t be worse. That is a foolish arrogant stance that defies everything we have learned about war. Reading through its recent demands, there is no question that Hamas is a much more rational actor than groups like ISIS or Boko Haram.

Israel gives warnings! Hamas openly tells families to not leave their houses when they are warned that the house will be bombed. Then uses their deaths to rally support.

If Israel warns you that your house is going to be bombed, where would you go? Stand in the street, dodging debris and ground troops? Go a few buildings down and ask if your whole family can move in with a neighbor indefinitely? Try to make it across town to a relative’s place? If you arrive at a new location, you might be told to leave there too, and then they have twice as many children looking for a place.

Israel has not invented an exception to the rule that destroying people’s homes with bombs is murder/a war crime/evil. A bunch of families running around in the streets during a ground invasion looking for a house that hasn’t been warned is not a reasonable or safe plan. And this presupposes that warnings are always given.

It makes Zionists feel better to believe that effective warnings are given. To the extent that it is done, it is for the benefit of their consciences, not for the victims.

These protesters are making wild allegation of genocide and comparisons to Hitler. That only makes things worse and is not realistic.

Whether or not the term “genocide” accurately applies to Israel’s actions towards Palestine, the criteria are met for “ethnic cleansing.” Ethnic cleansing is the systematic forced removal of ethnic or religious groups from a given territory with the intent of creating a territory inhabited by people of a homogeneous or pure ethnicity, religion, culture, and history. The forces applied may be various forms of forced migration (deportation, population transfer), as well as mass murder, and intimidation. The forcible deportation of a population is defined as a crime against humanity under the statutes of both International Criminal Court (ICC) and the International Criminal Tribunal for the Former Yugoslavia.

It would be difficult to deny that Palestinians were moved by force out of various areas, homes, and cities back in the 1940s, and that this same activity continues in the Negev and West Bank today.

No nation would stand for another launching rockets into it.

Palestinians could say the same thing about Israeli rockets. Israel’s precarious position in the world depends on gringos identifying with them but not with Palestinians. YouTube, Instagram, Twitter, etc. can, to some extent, put viewers in the shoes of someone holding up a phone to atrocities on the other side of the world. However, nationalism seems as strong as ever. It tells us: “these people are us, those people are them. Don’t let yourself identify with them. Their suffering is not like ours because they’re terrorists, savages, etc.”

Rational people should seek to set themselves free of this nonsense. No matter what your ethnicity or religion, you are just as much an Israeli as a Palestinian. We are civilians. We get caught in crossfire. Those using weapons are the only enemy. The bigger the weapons they use, the more they are an enemy. Folks in Israel should certainly be outraged that Hamas fires rockets into it. However, Israel is simultaneously firing much bigger rockets into Gaza that are over 100x more deadly.

Your messaging is “anti-Semitic.”

Really? Grow up. Jews, Muslims, and atheists alike criticize Israel for its crimes. There are some who criticize it for being Jewish, but that is not what’s going on here.

Read the words of some Jewish organizations. The International Jewish Antizionist Network “condemns Israel’s escalation of violence, as well as the revenge threats by the Israeli government and citizens and Zionist organizations and public figures. We denounce Western states and media claiming this brutality is somehow justified retribution for the deaths of three Jewish settlers from the racist, Jewish-only colony of Gush Etzion in the West Bank of Palestine. In the space of just a few days, the Gaza Strip has been indiscriminately bombarded by warplanes; upwards of 600 Palestinians have been rounded up and imprisoned, and at least ten Palestinians have been killed—including several children, a pregnant mother, and a seventeen-year old boy whose burnt, mutilated body was found dumped in a forest outside East Jerusalem. These actions expose the terrorism of a racist settler-colonial state. IJAN stands in solidarity with the Palestinian people and defends their right to resist the violence of colonialism and apartheid.”
Or how about Jewish Voices for Peace? “The root of this violence lies in the Israeli government’s commitment to occupation over the well-being of Palestinians or Israelis. Our unshakeable commitment to freedom and justice for all compels us to acknowledge that this violence has fallen overwhelmingly on Palestinians. And it compels us to affirm that this violence has a root cause: Israel’s illegal occupation. We are united in our belief that: The denial of Palestinian human rights must end. Illegal settlements must end. Bombing civilians must end. Killing children must end. Valuing Jewish lives at the expense of others must end. Only by embracing equality for all peoples can this terrible bloodshed end.”

They have. It’s called BDS, which stands for Boycott, Divestment, and Sanctions. It’s having a huge impact on Israel, and instead of responding to it, Israel prefers to shift the conversation to Hamas rockets, because Hamas rockets provide more of a pretext for Israeli violence. The real threat to the legitimacy of Israel’s self-proclamation as a “democratic state,” is the non-violent BDS campaign which seeks to impose boycotts on Israel until it meets its obligations under international law by:

Israel is the only democracy in the region.

There are no nations on the planet that can accurately be called “democracies.” Democracy means the people rule/decide, and that is not the case in the US or anywhere else. The US is an oligarchy / republic, but it does provide some essential protections for freedoms - freedom of speech, freedom of religion, freedom of the press, protection against discrimination, etc. Israel is unwilling to protect from discrimination both Palestinian citizens and the non-citizens of anywhere living under Israeli occupation. Israeli laws and customs enshrine racial apartheid. Apartheid could be also said to exist currently in the US in the sense that undocumented workers are used by the system but do not have the same rights and protections as citizens.