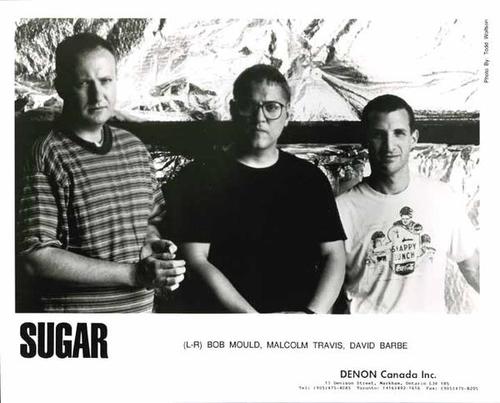 Back in the day, when I worked for a giant radio corporation, and I was naive enough to think that the company cared about music; I met Huey Lewis of Huey Lewis and The News.  If you’ve ever seen “Back To The Future,” then you’ve heard his music.  Anyway, he said something to me that can possibly explain why there are so many bands that go unnoticed.  “The worst musically crafted songs on the album, the worst-written ones, are usually everyone’s favorites,” he said.  It’s hard to believe that the guy who wrote a song called “Hip To Be Square” could be so poignant.  Perhaps then, this explains why so many bands, even ones with known artists; go unnoticed, or even unpraised.  This could be said about the band, Sugar.

Growing up, I was a massive Husker Du fan, and I still contend that “New Day Rising” is one of the best albums of the 1980’s.  So, when Husker Du broke up in the late eighties, I would have to contend with the almost polar opposite sound of Bob Mould’s solo records that followed.  Which means that I basically stopped listening to anything that he did post Husker.  My older brother, a jock; rarely had his finger on the pulse of music.  But, in the Summer of 1992, he handed me a promotional copy of “Copper Blue” by Sugar he had lifted from the college radio station at Texas A and M.  For the first time in my life, there was a compact disc that I would later in life, own on all formats.  It was one of, and still is one of; the best albums I have ever heard.  It has amazing pop hooks, it’s tough and melodic at the same time, and it’s full of amazingly crafted melodies.  It’s as if the stars aligned and made something amazing in a sea of bands attempting to be the next Nirvana.

I had the pleasure of seeing Sugar live at the Abyss on Washington Avenue.  They played so loud, a three piece mind you, that they blew the PA.  Sugar would go on to release an E.P. titled “Beaster,” which was more keyboard driven, but still great.  After that, they would release their final full length album, “File Under Easy Listening ,” which was still a Sugar album, but not the driving force that their first album was.  This is not to say it’s bad by any means, and it’s still a great listen that includes some of the more melodic songs the band made.  There was also a B sides album titled “BeSides,” which did contain several gems.  But, that’s really it.  In the span of about four years, they were easily one of my favorite bands, that basically fell on the deaf ears of the recording industry.

When the band broke up in 1996, Mould moved to Austin, where I was lucky enough to know some of the guys who were working on a solo album with him.  Granted, the first several times I hung out with him, I literally didn’t say much.  Though, I would eventually speak and help introduce him to indie bands who adored him like Bedhead, Christie Front Drive, and  Mary Lou Lord. He would indulge me by playing acoustic versions of Sugar and Husker Du songs, and it was a time in my life that I truly cherish.  At the end of that Summer, he followed me in his blue Volvo station wagon down to Houston to see Bedhead and Windsor For The Derby at the now departed, Urban Art Bar.  The best part of the evening would be in the restroom.  I was washing my hands, Mould was at the urinal, and some kid was complaining about the bands.  “I didn’t come hear to hear an instrumental band; and this scene is tired, it needs another Husker Du,” he said.

Mould would reply, “You’re a big Husker Du fan?” with his back to the guy.

“What do you care old man, just hurry up so I can pee,” he hastily said..

It was one of the funniest and most ironic moments of my life, and truly a sight to see.

In 2012, Bob Mould would go on to tour playing “Copper Blue” in it’s entirety.  All of the Sugar albums were remastered and rereleased with new material added on Merge Records.  When I saw him after the Austin show, he still remembered that jerky kid in the bathroom, and proceeded to retell the story to Jon Wurster of Superchunk fame.  In most cases I wouldn’t recommend checking out a bunch of reissued albums.  But when it’s a band like Sugar, I’d be doing you a disservice by not recommending them to you.

Previous: Aurora Picture Show and The Menil Collection: BYOB (Bring Your Own Beamer)
Next: Victorian Funeral Practices Tour and Lecture