Nick Cave doc and others

Leon casino, 20,000 Days on Earth sounds like the title to a sci-fi flick. In actuality it’s a documentary about a man who is in his mid-50s. That person, Nick Cave will be familiar to music and film fans alike.

There’s a lot to like about 20K Days. Rather than a straight-as-an-arrow doc about Cave’s life the film takes on a kind of psychoanalytical approach. For instance one sequence plays out like a therapy session with Cave talking to a doctor in a therapeutic setting. We learn about his life but in an offhand way.

Other sequences show Caved rehearsing with his band The Bad Seeds. Subsequently a studio version of one song is reprised as a rousing concert number that closes the film. Cave is an original kind of guy, nobody really sounds like him or produces the kind of music he puts out. You can say Tom Waits is the same way but that’s not a comparison so much as a case of similar performers reaching idiosyncratic autonomy. 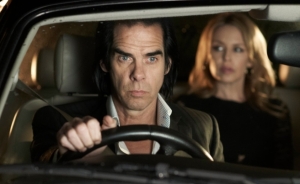 No mention is made of the numerous films that Cave has appeared in as an actor or film scripts he’s written. One scene takes place in a car where Cave is talking frankly with Aussie pop star Kylie Minogue, he in the front seat, she in a rear view mirror. They collaborated on a song years ago that was responsible for a huge resurgence of the Bad Seeds. Minogue was introduced to Cave by her then boyfriend Michael Hutchence. No mention is made of the fact that Hutchence committed suicide.

20,000 Days on Earth, opening this weekend at the Alamo Drafthouse Vintage Park, is the kind of film that speaks volumes and yet walks between the raindrops never getting wet.

A couple of other films playing at area theaters that deserve a little love include The Liberator, starring Edgar Ramirez. This historical epic presents a bullet points biography of Simon Bolivar. A bit sprawling at times the film contains some awesome and well thought out early-19th century battle scenes.

Tracks tells the amazing tale of a woman who walked over 2000 miles across Australia in the late 70s with her dog and a few camels. Brilliant imagery and photography combine to give the film a mesmerizing feeling of the solitude that can be found in vast stretches of wilderness and desert. Mia Wasikowska stars as Robyn Davidson, with support from Adam Driver as National Geographic photographer Rick Smolan. Usually in films based on true stories they show photos of the real people during the end credits. When this moment happens in Tracks, the actual people are better looking than the movie stars that play them