Leon casino, The first thing he does is burns some sage. Grabs a hot coal from the smoker, puts it in a terra cotta planter, then sprinkles sage from a nearby bush on top. Blue smoke in a gray sky. 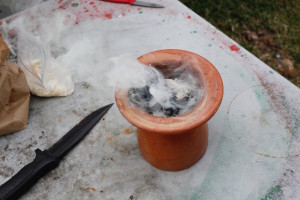 Back in college, I had a roommate who would declare, “I honor your soul, noble warrior,” each time before he brought his shoe down a cockroach. He got it from the movie The Last of the Mohicans, in which the protagonist says this to a deer he’s just shot, right before he slits its throat. I understand the sentiment. It’s a way to honor the life you’re about to take, on which your own life depends. It’s acknowledging the symbiotic natural order of things. It’s a way to show respect and give thanks.

But I’m not in college, I’m in a backyard on Houston’s East End. I won’t say exactly where, but it’s the back yard to a duplex in a residential neighborhood. We are about three miles due east of the George R. Brown Convention Center and about one mile north of the University of Houston. In other words, we are within spitting distance of the gleaming glass and steel towers of the fourth-largest city in the US of A and we are about to kill some rabbits and skin them on a wooden shed bearing the shadow of a satellite dish as it sits amidst raised garden beds and a whitewashed chicken coop. 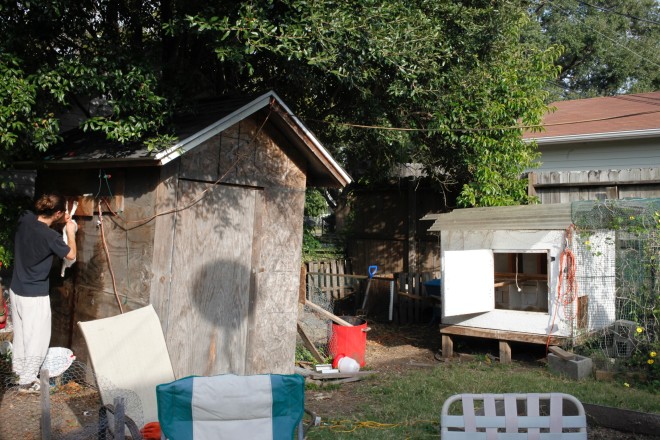 Alvaro holds open the top of the cage and Eric jumps in to grab one of four rabbits. He’s about to leave for Mexico for a month, and these four-month-old rabbits need to get killed and cleaned and frozen before he leaves. Alvaro asks if he names them. 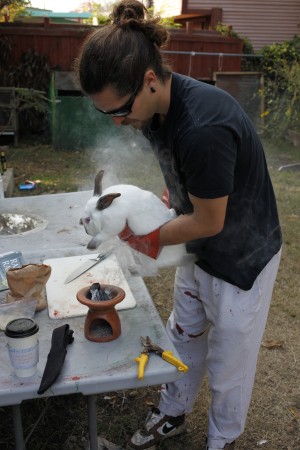 He “smudges” the rabbit in the sage smoke, then sets it on the ground beside a boat paddle. Alvaro stands on one end of the paddle. Eric lifts the other end, puts the rabbit beneath it, then lays the stick across the back of the rabbit’s neck and puts his foot down on the other side. A plane passes overhead. I imagine I hear a soft snap, like a twig might sound snapping under water. The smell of sage fills my nostrils. Eric lifts the rabbit by its hind legs and runs his hand down its back to make sure that it’s dead.

He carries the rabbit’s limp body to the side of the shed, where he hangs it upside down by the feet from two protruding screws. On this crisp, winter afternoon, steam rises off the pink flesh when the skin is removed.

But this is not a story about blood and guts. This is a story about self-reliance, self-sufficiency, and living off the grid in the shadow of empire.

This is a story that goes beyond the bumper sticker, “Think local. Act global.” Parts of it ain’t pretty, but even the ugly parts are preferable to factory farming livestock and multinational agribusiness flying in “organic” produce from far and wide, all borne on the backs of exploited migrant workers.

In December we ran a story about Cavanaugh Nweze and his project the Marcus Garvey Liberation Garden. Nweze reclaims abandoned lots in the food desert of the Third Ward and uses them to put people to work growing their own, healthy food. This is the next story in that series. Self-reliance. Self-sufficiency. Living off the grid in the shadow of empire.

We expect that we will catch some flack. From the vegetarians, of course, because their high fiber booties don’t stink (never mind the labor and environmental problems with big agribusiness). And from some carnivores, too, because people want to think that meat comes off the meat tree wrapped in cellophane, on styrofoam, with a little meat diaper to soak up the excess blood.

It’s all so neat and sanitized. Except it’s not. We just prefer not to think about it. We let somebody else do the dirty work for us.

We prefer not to think about it just like we prefer not to think that our unsustainable lifestyle is, well, “unsustainable.” We think that we’ll shift to a kinder, gentler, “greener” version of our current lifestyle and everything will be fine. Just flip the switch — no interruption in service. We’ll just swap out the gas-powered car for an electric car…swap out the coal and gas power plants for wind, solar and nuclear power plants…increase efficiency all around…and that’s it! We all get to keep all our toys and invite our Chinese, Brazilian, and Indian friends to the party. Or so we like to think.

We mock people who deny human influence on the global climate, but this belief that a closed system with finite resources (Earth) can support limitless growth and expansion if only we just “green” things up is equally inane.

But this is not a story about beliefs; this is a story about deeds — about rolling up your shirtsleeves and getting your hands dirty. Beliefs alone won’t stop global warming, nor will they put food on your table when fuel and fertilizer become so expensive that we return to local, seasonal agriculture of necessity, not because of a fad. 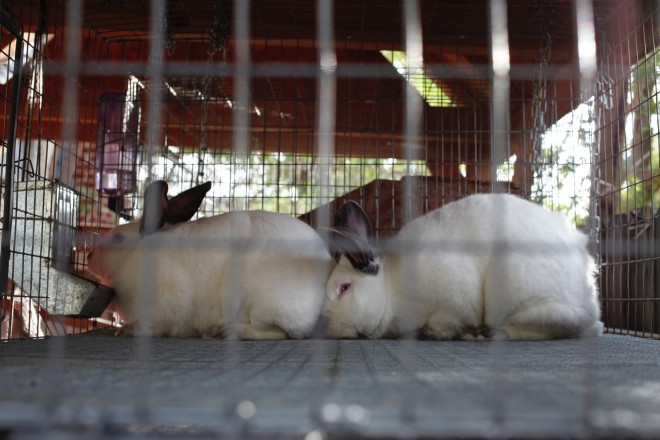 After he kills, skins, cleans, and butchers the first of the four rabbits, Eric brings together a pair of male and female breeders into the same cage so they can do their deed, so there’s a fresh litter when he returns from his trip. I hum the Benny Hill theme as the eager male chases the reluctant, annoyed female around the cage. Their offspring are being slaughtered in another part of the yard, but they are both oblivious. In the words of Jane’s Addiction, “Sex is violent.” Cycle of life and death. 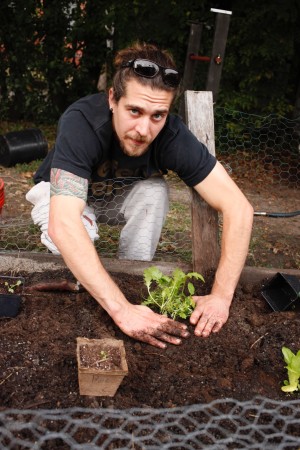 Eric kills the second rabbit. Then with the same brutal hands, he gently plants tender greens in his garden beds and tends to the chickens while Alvaro tries his hand at killing the third rabbit. I chicken out when it’s my turn, so Eric finishes off the fourth.

All told, the four rabbits yielded close to 20 lbs of meat that day. Only the fourth one squealed — not from physical pain, but it must have sensed what was about to happen more than the others. The first three went silently.

Eric says he got about 90 lbs worth of rabbit meat over this, his first year, from about 18 rabbits killed. They live four to five months before they’re slaughtered; feed costs less than $20 per month and is supplemented with kitchen scraps, and the poop is used as compost in the garden to complete the cycle. You can add to that the three chickens which laid about 15 eggs per week, for a total of over 700 fresh organic eggs for the year (and another $20/mo for feed). The one-time cost of building the chicken coop was probably $300 and the rabbit hutch was about $200.

Ninety lbs of meat and 700 eggs are not enough to cut out supermarkets, entirely, but that’ll shave a good chunk of anybody’s annual grocery bill.

This story makes no claims of moral superiority. We — people, cows, rabbits, corn, kale, the viruses and parasites in factory farm slurry — all of us —  are swirling and swimming in the interdependent cycle of life. You are just one small part of a dynamic biosphere, and the best you can do in life is tread lightly, and there’s no treading lighter than growing your own food on the soil beneath your own foot.

“My rabbits eat grass,” says Eric. “They live a good life. You want to tell me that flying in vegetables from overseas is better for the planet, just because they’re vegetables?”