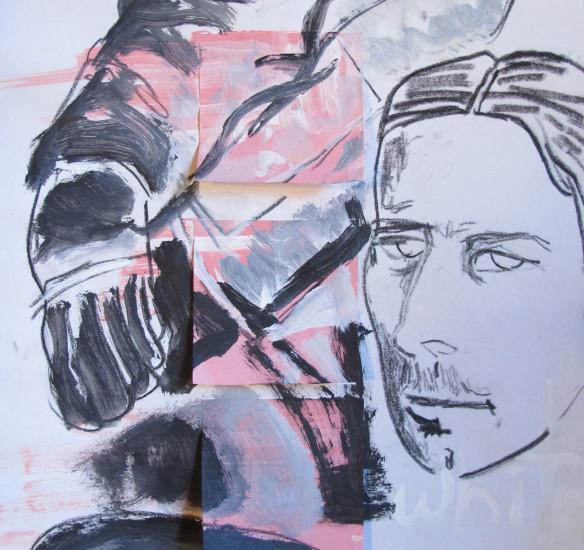 Blake Schwarzenbach was the singer and guitarist of Jawbreaker, Jets to Brazil, The Thorns of Life, and currently Forgetters. He also makes visual art. Local artist, dandy, gadabout, and socialite Peter Lee recently talked to Schwarzenbach about his art, music, influences, and the future of New York as Schwarzenbach prepares to show his art in Houston next month (details below).

How was the beach?

It didn’t happen! It was a sultry day in Brooklyn. There was a lot of rain so it was a “home day”.

That’s unfortunate. How long have you been making visual art?

Oh, I did that well before I did music. Since I was tiny, I was always a drawer.

What kind of stuff were you inspired by back then?

I was inspired a lot by Tin-Tin. That was one of my formative texts.

You started making music after you were making art. Would you say that the creative process is more different or similar between the two?

I think they’re really similar but my personality is weird in that it goes from visual to audio. So if I’m writing songs, I’m generally not doing visual art, and then when I’m doing art I kind of have no aptitude for music.

That’s interesting because the visual art pieces you have on your blog are very literary and are very involved with words. What have you been going through or thinking about to find these words?

I just…I try to do it unconsciously and if I feel like a piece of work is legitimate, then it’s pretty difficult for me to explain, but I think it has kind of an unconscious connection to viewers. So it might appear literal and use language, but I think the language is somewhat surreal.

If someone saw your art and asked you about it, would you be willing to tell them more about it or would you rather have them interpret it?

I’d much rather have them just experience it. I always felt the same way in music. I could try to explain lyrics for something but I’d only be doing them a dead service.

Have you had any incidents like that not as an artist or creator, but as a fan of someone who disappointed you?

I’ve tried to avoid that, actually, so I don’t want to meet anyone that I admire too much. If it’s their work that I connect to then I’d rather know them through their work than at a personal level.

You’re more well known for making music and touring. Do you have any specific goals as far as visual art and touring?

I would love to do that. I kind of like that it can go on tour itself, also, so I don’t have to be there. I’m kind of involved now that I’m doing a Ph.D program, so I have to be in New York for a certain amount of time, although it’d be a lot of fun doing installation work, to actually create art in a designated space. I’ve never done that before.

Have you been in art shows before?

I never have. This is my first time.

Do you plan on being present at any showings outside of New York?

Not presently. This is the first time I’ve sent work out and I don’t plan on attending.

Is there anything in particular that you want people to learn about or think about as they view your art?

I think the pieces each ask questions themselves and if there’s a contemporary crisis that appears in the work or if it seems to allude to something political or social, I hope there’s enough in the work that it’ll ask those questions. But beyond that I feel like I’m leading the viewer and I think that’s kind of unfair, so the work should do it itself.

You mentioned your PhD program earlier so you seem kinda busy. Where do you find time to create?

I’m actually unbusy now that it’s summer. I’m preparing to teach a class in the fall and take a couple classes, but I’ve been in a really fallow period for creativity. I have no real answer for how my schedule is. It’s remarkably unscripted right now. I need more activities! Art isn’t really happening right now. The work I’ve submitted is recent, but not current.

What have you been doing recently?

I’ve been doing some music with Forgetters, my band now. We played a show in Brooklyn in the summer and we’ve been rehearsing, but visual art I’ve been doing very little. Mostly it’s just academic preparation and music.

You’ve been in New York City for a while. How do you feel about the changes, especially since you’re a bit tied down there because of school? Do you see yourself there for a while?

I try not to. I feel I’ve lived here long enough for it to become a totally different city. So it’s much harder than the city I moved into originally to be a kind of creative person who gets by. New York is just so expensive at this point that even outer Brooklyn has become expensive that I don’t see myself here in five years.

What do you see after five years?

I don’t know, man, I’m scared. I don’t really know where you go after New York. I see something smaller for myself, or a little more modest. I don’t compete at the level you have to in New York. I don’t have a lot of ambitions in terms of my career and if I did, I’d be trying to enter the art world or music world at a high stakes level that some people do, but if I’m not really alien then I don’t understand it. It makes me ill-suited for this city.

Do you have anything to say to people who are inspired by you in anyway?

I’d say, “Yay.” Not sarcastically, I think that’s wonderful, and if they see the message or the way that I

work, I hope that’s inspiring, and that can be anyone’s message.

So people go to your art show, see your work, and enjoy it. What do you hope for them to do after?

I would certainly hope that it creates more work for those people. After I come out of shows that invigorate me, I tend to go make art or music from that. If I inspire people to do their own work, I’d be really happy.

What are the most invigorating things have you seen?

I saw a show, Raymond Pettibon, a few years ago. His first kinda-big New York show, I would say. I’d always followed him. I kinda grew up looking at his fanzines and watched him evolve into this art figure and I find that really inspiring that some that disorganized and crazy could find that kind of good recognition. He did a big installation a gallery in New York that just made me want to do work. He made it seem feasible.

Have you met Raymond Pettibon?

I’ve been in a car with him before, but he didn’t say anything. That was when I was in high school. He didn’t say a word. It was pretty surreal to be in a car with someone that wasn’t speaking for a really long time especially when you’re in high school because you’re pretty impressionable. And I knew who he was and I thought he was really cool, but you can’t force someone to speak. I kind of respected that he just sat there and stared up at the rear view mirror.

Would you be like that if you were in a car with someone who knew who you were?

No, I’m a little too chatty. I don’t go into that fetal art position, but I respect people that do. I didn’t think it was a hostile gesture, I just thought it was socially awkward. It seemed pretty genuine to me. 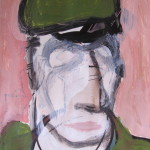 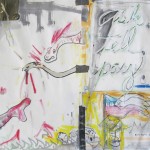 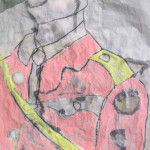 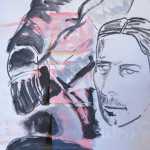 Blake Schwarzenbach’s art will be on display at the Bad News Bar on September 6th, from 6pm to 10pm. This sneak peak solo show will feature original sketch and journal works and is organized by Paper and Space.