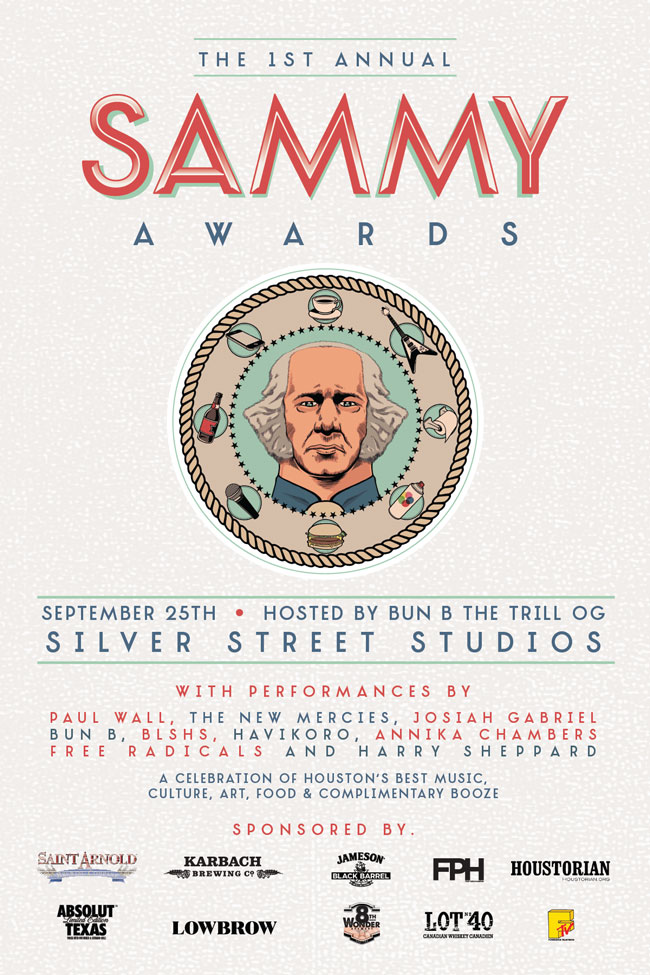 Free Press Houston has bit its tongue for too long.

For 12 years we have refused to do a ‘Best Of’ issue out of fear that recognizing anything good would cause Dallas people to move here. However, the talent in Houston has become too thick and we are sitting on far too much booze to not throw a wicked party.

So the time has come for FPH to put to the public a quasi-democratic poll which determines the very best of Houston art, music, culture, and food, and without further ado, we bring you Free Press Houston’s Sammy Awards.

Poll participants will had the opportunity to vote for nominees from our editorial board’s list OR to write in their own nominees as their vote selection. And when all of the votes are in and the process is complete, we are topping the whole damn thing off with the most super-deluxe celebranza of the year on September 25th. No bullshit, no bananas. This event will be one-part awards show, one-part concert, one-part complimentary booze (included in ticket price), and all-parts party. The show will be hosted by none other than Bun B the Trill OG himself, and awards will be presented byJuan Carlos, Katherine Whaley, Paul Wall, Mathew Knowles, and a host of other Houston notables. Also, there will be musical performances by Paul Wall, The New Mercies, Josiah Gabriel, Bun B, BLSHS, Annika Chambers, and Free Radicals featuring Harry Sheppard.

As an opening component of the Sammy Awards we are holding a competition among our most esteemed bartenders to create the quintessential Houston cocktail. New Orleans has the Sazerac, New York the Manhattan, San Francisco is known for the Fernet, yet Houston has no such cocktail. A veritable who’s who of prominent Houston bartenders will be competing for the perfect concoction that best represents our fair city. Drink competitors include Hal Brock, Brandon Young, Roy Mata, Justin Burrow, Leslie Ross, Lindsay Rae, Travis Tobey, Sheridan Faye, Ryan Rouse, and James Watkins. Attendees will vote to determine who gets the claim to fame of inventing Houston’s very own signature cocktail. We have a few surprises up our sleeve, so keep your eyes peeled. And get this: Your ticket includes complimentary booze. Also, everyone who attends gets something FREE. You like free stuff, don’t you?

Tickets are very limited, so click to get yours now!

Grown-up drinks included in the ticket prices for 21+ attendees.