Artist Matt Gifford Reels in a Whopper at the Orange Show

Leon casino, As part of its newest project, Smither Park, the Orange Show has commissioned Nashville-based artist Matt Gifford to design and create the skin surrounding the park’s Grotto and Amphitheater. Gifford is shaping the 30-foot tall bandshell into an enormous anglerfish emerging from the ground with a gaping mouth. Utilizing only found, donated and recycled materials, Gifford’s amphitheater, along with the whimsical park’s memory wall, meditation area, tunnels, swings and interactive sculptures, will provide a wildly unique setting for weddings, picnics, school outings, concerts, films, theater, and other outdoor performances.

Free Press Houston visited Matt Gifford at work one scorching day last week and had a chat with him about folk art, what’s gained and lost by limiting himself to found and recycled materials, and his hopes for the space.

Tell us about your background in folk art. How did you find your way to the Orange Show?

Well, my father is a contractor and he had me helping on the jobsite during summers, so you could say I started using table saws and nail guns before I learned how to drive. At the University of Kansas, I focused on metalsmithing and jewelry and dabbled a bit in sculpture, along with a decent helping of painting and English courses. The metal work kept me pretty savvy with torches, soldering, holloware and welding, but I was a crummy stone-setter, so I didn’t spend much time making fine, shiny jewelry. I was more at home with the hammers, torches, and kilns.

I made my way to Texas right after college, to try to work with Dan Phillips in Huntsville. I had seen his work in the New York Times in September 2009 and it blew my mind. I spent a week volunteering and pestering him for a job until he finally caved.

Working with Dan was really my first experience with reclaimed building and folk art. By the end of college, I had become disillusioned with the idea that my main contribution to the world was making shiny stuff for rich folks when so much waste and excess surrounds us. So, this work with Dan was hitting three big nails right on the head: it was artistically appealing, it built on my background in construction, and it was environmentally responsible. That was enough to sell me.

The Smither Park project, which is also designed by Dan, was just getting off the ground when my work with Dan in Huntsville started winding down. I began work on one of the small panels on the huge mosaic memory wall, back when there were only about 8-10 artists involved. It has seen many come and go since then, myself included.

You have been working with found and reclaimed materials for a few years now. What do you gain from this constraint? What do you lose? Why do you continue to make this trade-off (limiting yourself this way)?

Working with found material definitely complicates things.  For starters, there isn’t usually a good, reliable source for most of your supply needs.  You can count on spending about three times as long trying to scavenge what you need, and you definitely get your hands dirty.  You’ll be no stranger to scrap yards and dumpsters, so look forward to that.  Second, as I alluded to before, there’s no guarantee that you’ll get what you have in mind, so your plans have to stay malleable and willing to compromise.

The upshot is that there is so much more intrinsic history and character to the pieces you reclaim.  It’s a different mentality when approaching artwork-do you prefer to work with material as it presents itself to you, and let it help you guide the narrative of the work?  Or do you prefer to have absolute control with materials that abide by a determined system?  I’m not trying to say there’s a right or wrong way to go about it, as I’ve definitely taken both routes before.

My academic mindset was much more rigid, with the focus being on taking a specific quantity of material and forming it into my vision.  I still love that approach to work, and I’ve been doing more clean linear work lately, but the reclaimed work I’ve done usually ends up yielding a stronger personality, and almost always more charm. 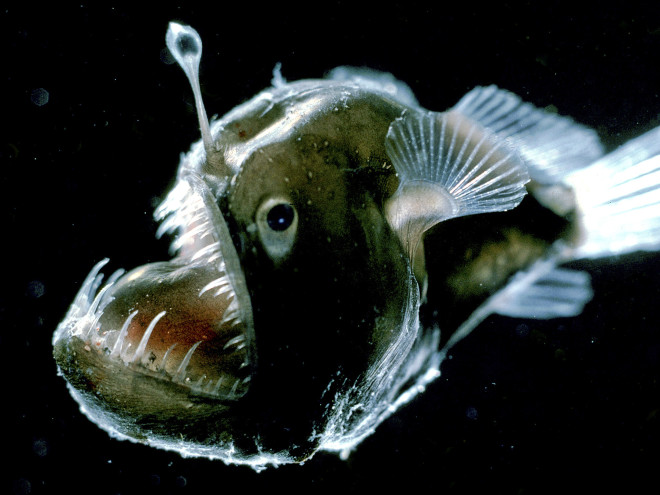 That’s a tough one to give a solid answer.  I’ve never considered myself much of a cerebral artist, or even much of an ‘artist’ at all (I hold that term rather sacred….I feel better with ‘maker’ or ‘builder’).  I’ve always been much more inclined to follow my gut reaction to a question, or to try to grab a hold of what flashes before my mind’s eye when I get ‘inspired.’

I’ve always had a fascination with anglerfish from a young age, when they appeared to be just about the most horrifying thing that Nature could produce (them, and alligator snapping turtles).  When I saw the specs for the park and the proposed Grotto, I immediately had the vision of some kind of gaping maw emerging from the ground.  This, of course, could be any creature, though it does invite a mental image of the famous Jaws shark. However, that wasn’t the right shape for this space, so I took to sketching different ideas.  I settled on the anglerfish because it allowed for some great design opportunities; I could subvert this crazy nightmare monster of the deep and make a carefree, stylized, funky caricature.

As far as my illustrative work, which guides my renderings and designs for the Grotto, I feel I’ve got a strong subconscious influence from Ed Roth and his Rat Fink character.  I’ve never been a flag-toting fan of his, but I saw his work early in my youth, and I think it made a strong impression.  The creatures he made were abrasive and ballistic, but at the end of the day, they aren’t really threatening.  I think this intense cartooning and exaggerated elements informs my pen and ink work, and it likewise informs my approach to this anglerfish design.  Perhaps this is an attempt to lasso and tame this creature which inspired horrified wonder as a kid, using visual techniques that I learned at the same sponge-type phase.  That, or I’m just following my gut.

What are some of the materials you are using to decorate the fish?

How can people can get involved and be part of this project?

Right now, it mostly comes down to donations.  If anyone has old chrome pieces laying around from old cars or motorcycles, those would be great to grab.  Also, I’d love to get a good collection of reflectors from bicycles, or small tail lights from motorcycles/mopeds.  The trick to a reclaimed project of this scale is getting enough of any particular element to make a dent in so much surface area.  So, if I’m going to use exhaust pipes, for instance, I need to get a butt-load of them.

What are your hopes for this amphitheater? What is your dream show for this space?

Oh man, that’s exciting to ponder.  Of course, the Grotto would hopefully become mega-famous and end up with as many selfies as the Cloud Gate (the big mirrored bean in Chicago), with thousands of loving nuptials made under its teeth, and only the most thought-provoking and finest of art films screened there….but it can be whatever folks want it to become.  I’m just hoping it gives folks something new and inspiring to look at, and be a host to great memories and the artistic impulses that reside in us all.

As far as a dream show, I’d have to pray for either Conor Oberst, The Lupines, or The Tallest Man on Earth. I imagine that Dan Deacon could also put the space to work quite awesomely.  HOWEVER, I would totally settle for a Supertramp reunion show.

Matt Gifford hopes to complete the Grotto at Smither Park by the end of August, in time to host events this fall. Visit orangeshow.org to keep up with Gifford’s progress,  check out his Instagram @notmattgifford for past/future work, and call 713-926-6368 if you would like to donate materials.

And check out my photos of the in-progress memory wall!