Added on August 23, 2015 Michael Bergeron Alamo Drafthouse , Being Evel , The Editor
No Comments

The Editor & Being Evel

Decrease Font SizeIncrease Font SizeText SizePrint This PageSend by Email
A film editor works on a horror film. Our protag has a past that includes a weird incident where he used his editing trimming blade to slice off some of his fingers. Now he has wooden finger attachments that in another world would look steampunk. However in The Editor it appears to be a scarlet letter indicator that the guy is a kook.

A murder has taken place and an oddball detective investigates. His go to suspect is the editor. The co-directors, Matthew Kennedy and Adam Brooks, play the detective and the editor. Kennedy in particular does this queer look that instantly reminded me of Zoolander.

The main reason The Editor left an impression was due to its cool retro look and the horror sequences that pay homage to gore techniques of yore. There’s an unmistakable Argento if not Bava vibe running full speed ahead. Then there’s the whole camp atmosphere that The Editor exudes, at once comforting yet bizarre.

Being Evel examines the life and stunts of Knieval with no punches pulled. He was not an especially nice guy yet he performed some stunts that have never been duplicated.

The most brilliant thing that Knieval did was to professionally film his stunts for posterity. And the footage, seen in the film, is absolutely riveting. Knieval hired John Derek to film his incredible 140+-foot motorcycle jump at Caesars Palace that took place on December 31, 1967. (Just an aside, John Derek was married to Bo Derek, Linda Evans and Ursula Andress. Evans was operating one of the cameras on the Caesars Palace shoot.) 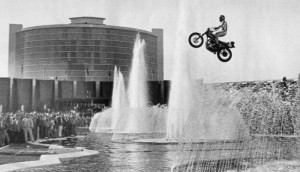 Evel Knieval was a kind of hero that existed in previous times. EK wanted to jump the Grand Canyon on a rocket fueled motorcycle, and when he couldn’t get permission he opted for a jump across the Snake River Canyon, and the event was pre-sold on closed-circuit television in 1974. This Evel guy was creating pre-sold publicity like P.T. Barnum in the age of Aquarius.

Evel performed a multiple-bus jump and among his many accomplishments were amazing motorized jumps that confound the mind. The best thing about Being Evel is that it shows the progression of how far our lead character was willing to go to prove that he was the ultimate daredevil in recent history.

This documentary turns the corner at faster and faster speeds. Watching Being Evel is like watching a car crash as it’s happening.