Added on August 7, 2015 Michael Bergeron The Fantaistic Four
No Comments

Leon casino, Twentieth Century (Foxy Lady) owns the stand-alone rights to Fantastic Four. Universal owns the stand-alone rights to Hulk. The Hulk can appear as a supporting player in The Avengers’ movies but Universal/Comcast has exclusive rights to singular projects where Hulk is the main, and only, character. Sony/Columbia has the rights to The Amazing Spiderman and yet Spidey will appear as a guest star in the Marvel sequel to Captain America. By and large Disney, which bought Marvel much the same way they bought Pixar, has the exclusive rights to Iron Man, Cappy, and Guardians of the Galaxy.

If you think you are confused at this point, you aren’t half as confused as your humble scribe who must draw a map, with arrows and dots, just to write an article about a half-assed super hero movie. Growing up in the 1960s, as some people of questionable morality did, I thought the Fantastic Four was the best comic book I could purchase on my weekly allowance of one-dollar. That one buck bought me a soda, a couple of Pixy Stix® and a 12-cent copy of Fantastic Four du jour. As an aside Pixy Stix® were the ultimate 60s comfort food – it consists of only salt and sugar in a tube that you suck down your throat.

Perhaps the fast food epidemic started with that time frame and certainly there is a corollary with the appearance of comic book heroes of the 60s (comics already in their Silver Era) and the fact that those same super dupers are what are currently worshipped in the chapel of cinema in the second decade of the new millennium. There is nothing new in the universe (Somebody please give Alan Moore a read.) If you need a diagram to decipher the various variations of the Marvel Universe don’t worry – nobody understands the Marvel Cloud.

The Fantastic Four consists of four players: Reed Richards, boy genius; Sue Storm (soon to become the wife of Reed); Ben Grimm, and Johnny Storm, Sue’s brother. Reed has the ability to stretch and conform his muscles to amazing length. Sue has the power of invisibility. Grimm is made of rocks and is indestructible. Johnny is a human torch, easily ready to flame on. I could bore you with the actors involved and the better films they were attached to.

The reboot of Fantastic Four 2015 has taken some welcome liberties from the constructs of its origins. The very white Sue Storm is an orphan raised by a black family. Grimm, a man composed of stone, never has to wear pants because even his stone dick looks like just another rock. The quartet is not housed in their comfortable Manhattan digs but rather a secret military base only known as Area 57. (What happened to 52, 53, 54, 55 and 56?) Unlike their 60s interaction the current Fantastic Four are products of the current generation. They are young, smart, and ready to question the current political paradigm. 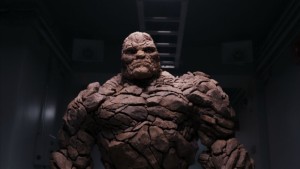 If there’s a problem with this latest super hero film it lies in the fact that this movie is purely an origin story. We already know who this quartet is, however the film hammers home the uniqueness of their powers like it’s a phenomena never before seen. Even the recent Adam Sandler film Pixels acknowledges what came before in previous human history. When film ends we have yet to see anything more than a couple of psychological gestures that seek to explain their superpowers. For example, Sue Storm does this kind of Tai Chi motion thing with her hand as she creates force fields with her invisible powers. There could have easily been a few more scenes in this film to flesh out aspects of the group’s skills.

The Fantastic Four were my bread and butter as a young lad, but the previous films in the FF canon were hampered by their, quite frankly, lousy effects. As I took the gentle memory of that early reading material and became a man I sought a perspective on my childhood heroes from a sexual point of view. Surely, Reed could extend his dick to boing across the room. And Sue would remain invisible save for her thermal heat pussy signal. Ben Grimm would slay with his rock hard cock and Johnny Storm could turn up the temperature in a casual sexual encounter by escalating the temp of his hard-on to degrees of hotness only felt by the gods of Hindu folklore. Now in the year 2015 I’m an old dude and just want to be entertained with snappy retorts and brilliant action sequences. The Fantastic Four does not want to play ball. At least not on the level playing field of finding what makes the clockwork of these people tick.

There’s already a sequel in the works that will surely capitalize on their unique abilities (expect it in 2017). But for a 90-minute costume hero flick The Fantastic Four sure spends a lot of time on character development at the expense of an action packed story. Opening in theaters throughout the universe this weekend.