Two Men and a Brisket- Yelapa

Decrease Font Size Increase Font Size Text Size Print This PageSend by Email
by Andrea Afra
I am typically reluctant to jump on the popular restaurant band wagon so it took me a while to make it to Yelapa, which is definitely ‘scene’ cuisine. Yet, after driving by it several times I thought, damn, something smells really good and I need it in my face stat. Why not give the place a shot? Just because white people are raving about it doesn’t mean I should write it off.

Leon casino, The restaurant was supposedly on a wait when we arrived, but there were a few tables open in the bar area as well as on the patio. We sat inside first and ordered drinks, not knowing yet of the patio seating. I decided to try the michelada, but they never compare to my own, for I am a michelitist. My husband had a really great mojito and I wished I did too. I watched a large man in a white cabana shirt with a neatly trimmed goatee, also white, shift around a floor fan a few times and smile at us as he took a stool at the bar, where a large shot of tequila and what looked like a whiskey and coke awaited him, but he didn’t strike me as a whiskey man. Later on when we moved outside, he was there, shifting fans around again and walking around the perimeter of the patio spraying something that caused the diners at the table next to us to cough. He nodded appreciatively and mumbled, “This will get those mosquitoes, for sure.”

I had heard that Yelapa was known for their ceviches so we ordered two. There are several different styles, plus your choice of having it prepared ‘Peruvian’ style, which is ‘flash marinated’ in lime juice for 5 minutes or fully cooked in the juice ‘Texas’ style (code for white people.) I ribbed my husband for ordering it well done and he said he wanted to check the quality first, which is understandable considering BP’s generous dose of oily marinade it had infused into the Gulf. The first ceviche brought out was the Campechana, which is a spicy tomato based version with crab, shrimp, and avocado, and the second was the more traditional Sevichey Tejano. Both were excellent in taste, quality and presentation. We knew we were in for a treat with our entrees. 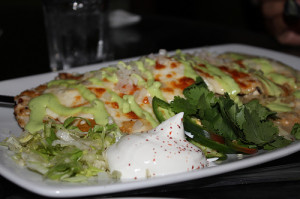 I was going to get the maiz con pollo because it had fun little things like blue polenta and huitlacoche, better known as ‘corn smut’, but I really wanted beef, so I opted for the smoked brisket barbacoa tacos, and at the waiter’s suggestion, I switched to sopes instead of tortillas. When the dish came out, there were three wee sopes topped with refried beans, pickled red onions, ‘ghost pepper mayo’, fresh cilantro, chilies, and that succulent slow smoked beef that had lured me in from Richmond Avenue. I had one bite and had to put it down for a minute. When the right flavor powers combine, an incredible thing happens in your mouth. Each bite is a full on meal. The heat and the tang and the char all on an innocent little corn flour pillow stunned my taste buds but when they gained consciousness they couldn’t get enough.In the other corner, my husband had the ‘Whole Enchilada’ with chicken instead of beef brisket, which is ridiculous, I think, but the damn thing was in overdrive with about a pound of cheese, red mole sauce and a side of sour cream, cilantro and fresh jalapenos. My fork gained ten pounds just from touching it. 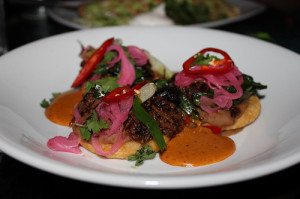 It turns out, that the man on fan and fly patrol was Chuck Bulnes, one of the owners, and his partner chef LJ Wiley was the guy running in and out of the kitchen, greeting tables and hustling plates. I understand and respect the challenge faced in balancing a menu with items ranging from familiar for the feint at heart, like tacos and enchiladas, to dishes like the cantaloupe gazpacho and a ceviche featuring violet and octopus. Always the skeptic, I was impressed by the thing that matters most in a meal, which is how good it tastes. I look forward to getting to know Yelapa better as it reminds me of some of my favorite people: Adventurous and drunk.
2303 Richmond Avenue
Houston, TX 77098
(281) 501-0391
http://www.yelapatime.com