Walking While Black in River Oaks 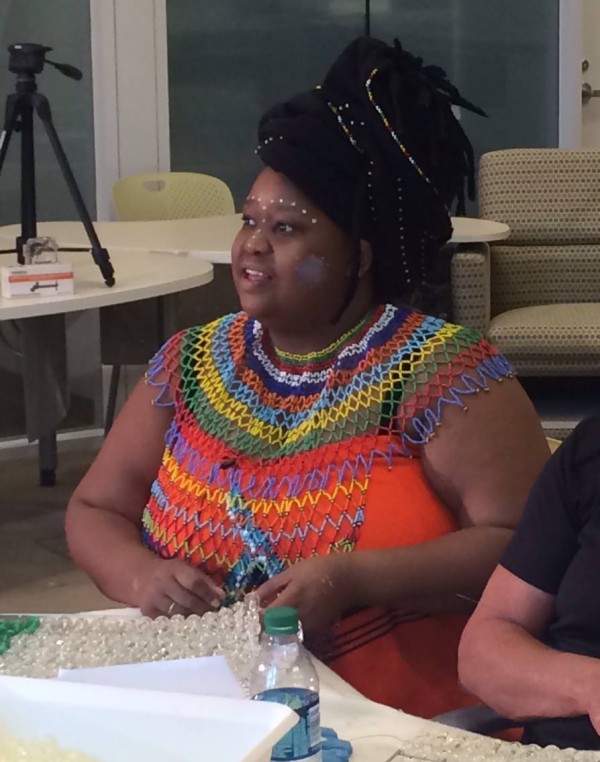 Leon casino, I am calling this a post about art, even though I spend more time and space talking about an incident out of the 1950s. Forgive me; I thought that we were past this.

We have all heard about that rampant criminal act, “driving while black,” which keeps good, honest, hard-working police officers busy year-round, but what about black people who think driving short distances is silly, who choose to use public transportation, who walk to bus stops to avail themselves of the buses that would otherwise run empty?

One such person is Bulelwa Bam of Mthatha township in the Eastern Cape province of South Africa. Ms. Bam is a visitor in Houston, here as part of a cultural exchange program, to help local artist/designer Selven O’Keef Jarmon with a public art project at Art League Houston, 360 Degrees Vanishing.

Ms. Bam first encountered Houstonians’ absurd attachment to their cars when visiting Houston to prepare for 360 Degrees Vanishing last November. One day during that visit, six people used three cars to drive the eight blocks (one half mile) from the Art League to Aladdin Mediterranean Cuisine at the corner of Westheimer and Montrose. Eight blocks, one half mile, three cars.

Fast forward to this week. Ms. Bam is back in town for four months, helping to complete the project at the Art League. She is staying as a guest of an Art League patron in the patron’s River Oaks home. Her host is often gone, traveling, but Ms. Bam has free reign to come and go as she pleases—she is a guest, after all.

Around midday last Monday, August 25, Ms. Bam left the River Oaks home where she was a guest to catch the Westheimer bus so she could make her way to Rice University, which is where the beading sessions were being held. She didn’t make it very far before she was stopped by River Oaks Police.

“Awfully hot day to be walking,” he said to her.

“Where do you work?” the officer then asked.

Just stop for a moment and think about the implications of that question for a moment. Where do you work. Why is he asking her that? She is an artist on a visitors visa, she cannot even legally work in this country. What kind of question is that to ask a random pedestrian you’ve stopped for no reason?

Ms. Bam informed the officer that she is not a worker but a guest. The officer was apparently unable to comprehend that a dark-skinned person could be a guest in River Oaks, because he asked her again for her employer’s name.

Unfortunately, Ms. Bam could not recall her host’s last name—they are on a first name basis, nor could she recall the home’s exact address. So the officer detained her. He said that “there have been a lot of robberies in the area” and he needed to verify that she was authorized to walk down a public street in the middle of the day before he could allow her to move along.

He asked her to wait while he called for back-up, so this woman, this artist, this distinguished guest in our country was made to stand on a sweltering hot street at midday in late August while this cop sat in his air-conditioned car and played radio games with his buddies.

He did allow Ms. Bam to call Selven Jarmon. After she had explained the situation to Jarmon, she handed the officer the phone.

“Does she work for you?” was the officer’s first question to Jarmon. “Where does she work?”

The officer was simply unable to comprehend that Bam was not a domestic worker! The only reason he could conceive of a black pedestrian walking those streets was if that person was a maid or a landscaper or a pool cleaner!

Jarmon was quickly able to get the homeowner (Ms. Bam’s host, the Art League patron) on the phone, and the homeowner apparently gave the River Oaks Police Department a solid piece of her/his mind.

Ms. Bam was finally allowed to go along her way, and she adds that throughout the ordeal, several light-skinned humans walked and jogged those streets with no harassment from anyone, and throughout the ordeal, the male police officer sat in his air-conditioned car while forcing this dignified visitor to our country to stand in the hot sun.

Bulelwa Jam is a charming, elegant woman who has been to Germany, the Czech Republic, China, Burkina Faso, and Ethiopia in addition to the US, and nothing remotely like this has happened to her before. How is that for American Exceptionalism?

She says that yesterday (Thursday) she saw a similar patrol car as she walked the half mile to the bus stop, and this time the officer waved at her. I asked her if it was the same officer or a different one, but she couldn’t say-all she saw was the hand protruding from the window.

Anyway, it really sucks that I have to take time to tell you about this, because the beading project that Ms. Bam and Mr. Jarmon are doing in collaboration with the Art League Houston is much cooler and much more worthy of your attention. (You should even volunteer, here is a link for more information on how to do that, but let me tell you something about it, too.)

What is it? Basically, they are going to cover the outside of the Art League in nearly 400,000 acrylic beads. 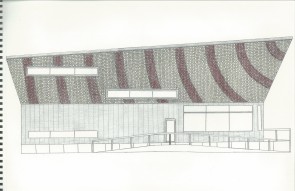 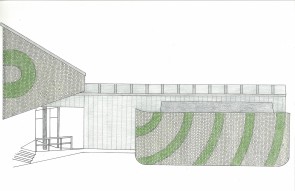 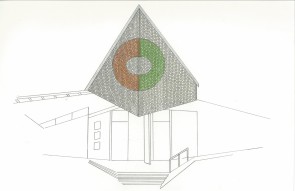 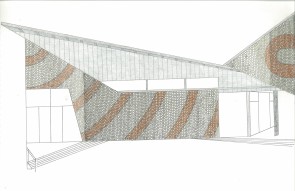 Bulelwa (for some reason, in the latter half of this article, I feel comfortable referring to her by her first name) told me much about the beading traditions in her home province, Eastern Cape, the “Home of Legends” (including Nelson Mandela, she tells me with proud smile).

She tells me about all the things that beaded necklaces can communicate. First of all, people from different regions use different patters and different color combinations. Some necklaces are gendered, some are for certain ceremonies, only, and some indicate the wearer’s social status. A man, for example, can wear a string of beads that can potentially indicate that he is married, has children, and has cattle. Similarly, a young girl who has not yet reached puberty should not wear certain pieces, and a young girl of a marriageable age can indicate with a necklace that potential suitors should feel free to try their luck.

But the tradition is being lost. Young people-what Bulelwa calls the “Born Frees”, i.e. those born after the end of Apartheid in 1994-they are not so interested in preserving the traditions.

“Things are vanishing from the landscape,” says Ms. Bam.

So she and Selven Jarmon have rounded up 16 traditional beaders from the Eastern Cape, and partnered with municipalities there and the Art League here to lead volunteer sessions which will culminate in the Art League being covered in beads.

“Back home,” says Bulelway, “when people make beads, there is singing, there is conversation. It is like a counseling session.”

And so, likewise, are the sessions here. She tells me that just the day before, a group of African American do-gooder women called The Links came to volunteer. A few days before that, a local ESL teacher brought her class of different aged people from different parts of the world to volunteer. Check out all these photos! 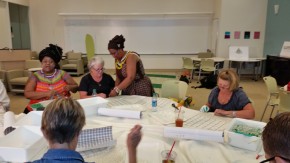 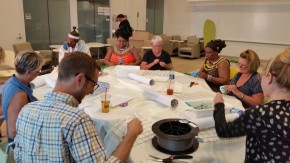 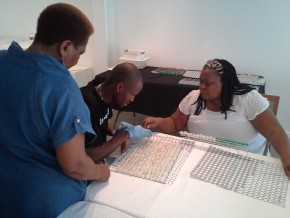 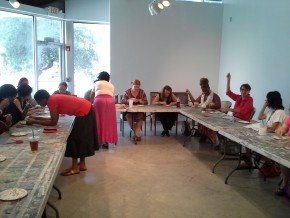 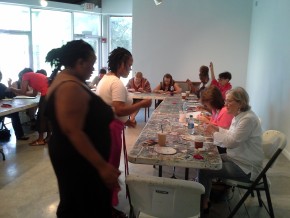 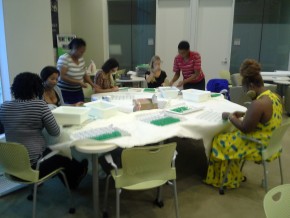 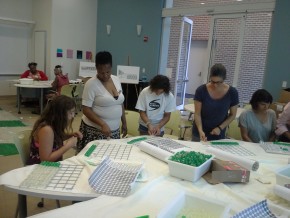 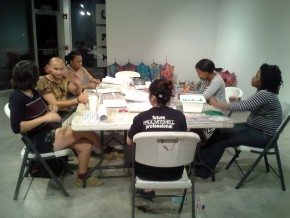 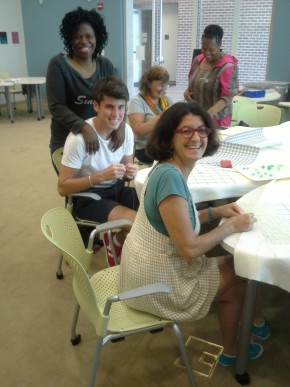 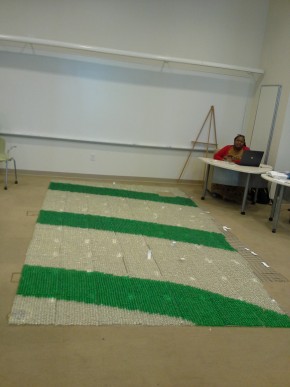 HOUSTONIANS: Take a tip from this foreigner, this visitor to our country-you have chauffeur-driven limousines cruising around your town all day and night, mostly empty, waiting to give you a ride. Make use of them! The drivers and the people answering phones on the customer care line are exceedingly kind and helpful, says Bulelwa Bam. Younger passengers offer her their seats. (She does, however, own and drive a car back home…where they drive on the wrong side of the road, British Commonwealth style.)

Anyway, remember the last time some black people went for a casual stroll through River Oaks?

NOW GO VOLUNTEER AT THE ART LEAGUE THIS IS AN OPPORTUNITY TO RAP WITH SOME REALLY AMAZING PEOPLE AND GIVE THEM A CHANCE TO MEET AMAZING YOU, TOO